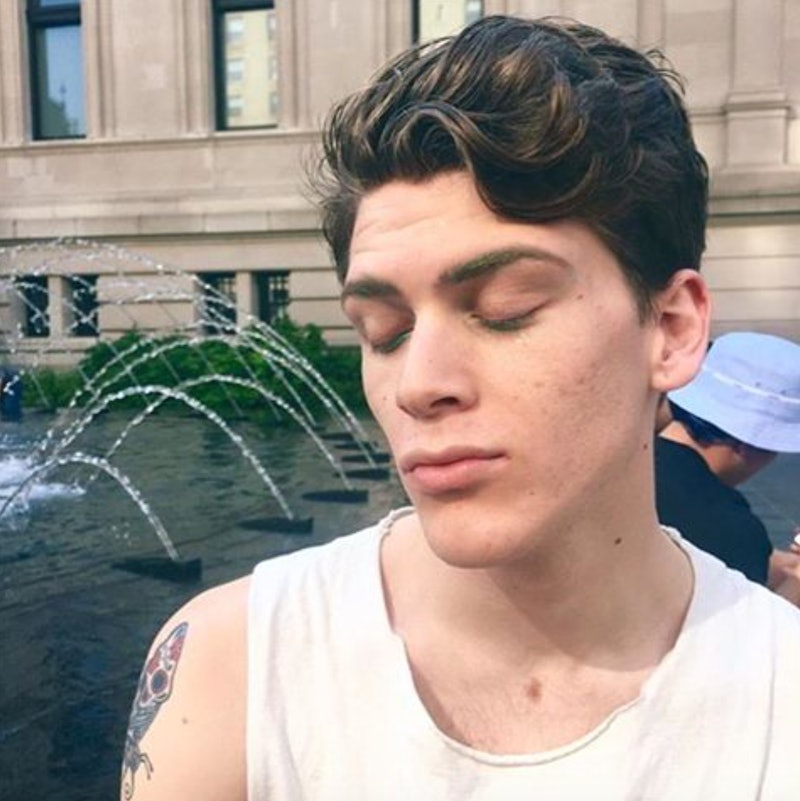 When it comes to getting dressed in the morning, there are a million anxieties racking most of our brains surrounding the "perfect" outfit. But in the midst of tragic and hateful events like the Orlando shooting, the fear surrounding dressing for queer and trans people often becomes even more palpable. We are, once again, reminded of how certain outfits or presentations can magnify the already-existing target on our backs. I think of this when I see my beautiful partner rocking their favorite lipstick and a cute dress in public. Although I support Skylar and their identity in every way, I am filled with nauseating fear whenever I watch them getting ready for a fun night out, essentially suiting up for battle. For embracing their femininity in the face of so much hatred, they are one of the bravest people I know.

I've written about the way presenting femininely can be dangerous, warranting a certain measure of fear within me when I walk around in public while attempting to avoid the unwanted advances of creepy individuals on the street. But I haven't frequently discussed how, despite the pride I have for my queer identity and regardless of whether I'm feeling femme or not, I often prioritize safety when getting dressed in the morning, striving to a dress in way (modest; masculine) that will repel dangerous people. But for my partner assigned male at birth, dressing femininely often seems as though it can lead to many more dire consequences.

The incredibly high statistics regarding queer people (including trans women) being killed every year emerged from the back of my mind after the tragic events unfolded in Orlando on June 12, which cost us 49 queer, trans, Latinx, PoC lives. Skylar feels the same way. "It just reminded me that wearing lipstick or wearing nail polish isn't just something that I like to do," they tell me. "It's also an act of bravery — I put myself in more danger when I present more femininely. For a while, I've been able to push it to the back of my mind, but now it's just hard to ignore."

And so I can't help but be filled with concern when they embrace their fabulous feminine self through their wardrobe, something I used encourage when we were living on our queer-centered college campus. Living in the so-called real world means facing the reality that people will dismiss us (or worse) when we embody a gender presentation they don't feel we have a right to.

Since my partner and I live near New York City, we both feel that there are lots of places we can go that make us feel safe while performing a queer presentation through our alternative beauty choices and subversive styles. But step outside the city's queer-friendly parameters, and we're reminded of how different things can be.

Recently, Skylar and I had a much-needed date night and went to the neighborhood one train stop away from our home to enjoy a slightly cheaper movie. We were both rocking different shades of ColourPop Ultra Matte Lip, and enjoying our night out in our cute date outfits.

But as we walked through the town, all eyes were on Skylar as pedestrians stared with confused expressions at their makeup-covered face for way too long. I scowled at these people, and held Skylar's hand just a little tighter, feeling protective and ready to fight on their behalf as always. I wracked my brain for things I could say to make them stop looking; something that would get the point across without making them uncomfortable. But as usual, I came up short and instead continued scowling at strangers, hoping that their skeptical looks wouldn't elevate to anything more violent.

I felt helpless even when a cashier at the local grocery store stared Skylar down with a disgusted look before finally scanning their items. He asked his employee if all the doors to the store had been locked, as he continued to fix a menacing gaze on Skylar's lipstick-coated pout.

I was at a loss over what I could do if the situation had taken a turn for the worst, as I was too preoccupied with my anger over Skylar's inability to embrace the bold beauty looks they love without fear of repercussion. I was angry that I had the freedom to flaunt myself proudly and unafraid in beautiful purple lipstick while Skylar had to endure the gaze of everyone who didn't understand.

Experiences like these only give me the tiniest of glimpses into what it's like to be a transfeminine person moving through a public space. Skylar experiences hateful stares quite often when they're rocking a feminine outfit, and feels the most afraid in these situations on the subway. "Because you're in such close proximity with everyone, if someone's looking at you, they're right fucking there," they tell me. "And there's nowhere to go. So it becomes much scarier getting trapped in and enduring a look of confusion. You can't leave until the next stop."

Thanks to such reactions, Skylar has to be extra careful when navigating through the subway system, constantly checking to see whether or not someone is following them off the train. "My fear is always that someone will follow me out and do something later," they say. "If I'm feeling that way, I'll look around to see if that person is still around me. And if they are, I try to go to the other side of the street or walk to the other exit."

As queer people, this fear is unsurprising. We live in fear simply for being ourselves, which means having the audacity to perform queerness through stylistic choices. But since the shooting in Orlando, our mortality seems more palpable to me than it's felt in a long time.

"I'm just gonna be much more conscious of every feminine thing that I wear and do," Skylar adds, "because that'll be putting me in the spotlight of potentially something bad happening."

While it's important to be your most authentic and unapologetic self for reasons of body positivity and general self-acceptance, it's also OK to put your safety first sometimes. For me, presenting as masculinely as possible or wearing the weirdest beauty trends make me feel comfortable in my skin, my queer visibility out and proud. But on weeks like this one — on days when we genuinely feel afraid to leave our homes — queer visibility through fashion doesn't feel all that empowering.

We still aren't sure of the kinds of repercussions Orlando may have on our presentations, but we are more certain that prioritizing safety over authenticity is sometimes essential. That said, no matter how often we are hurt on the streets or how many people look at us funny simply for existing, we will never stop being who we are. I know that once Skylar feels up to rocking lipstick again, I'll probably still be just as scared. But I'll be equally proud of them for refusing to erase who they are in the presence of hatred.