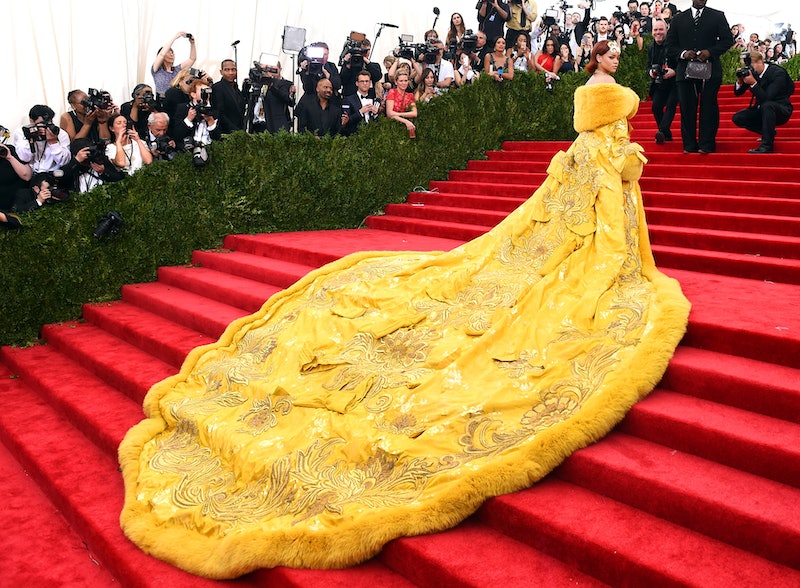 Our fascination with celebs can take on many forms: What projects they're working on, who they're dating, what they look like when they go grocery shopping. More often than not, most of us keep an ear to the ground regarding what they're wearing. Enter the most iconic celebrity outfits of the 2000s — from outrageous meat dresses to noughties-centric dress numbers that will throw us back into those Y2K years. For those of us at home who can't afford sweeping couture dresses or don't have the inclination to wear quirky outfits, the ensembles will offer some great entertainment.

A look can become iconic for a medley of reasons. The most obvious one is when it causes quite the controversial stir — whether the human wearing it was celebrating their body (like Lil' Kim's boob pasties or Beyoncé's barely-there Met Gala dress), going for an outlandish look, or making a social comment while wearing it.

A look can also be dubbed iconic because of how perfectly it captures the spirit of the decade the person in question wore it in, like Elizabeth Hurley sporting a Versace safety pin dress in 1994 or Avril Lavigne showing up on a red carpet wearing a tie and skater boots in the early 2000s. So let's check out some memorable looks. Below are 11 of the most iconic celeb outfits of the new millennium.

Not only was the dress iconic in its aesthetic — sporting a sheer top and flowing, structured skirt — but it was historically iconic, too. That was the gown Berry wore to receive her first Oscar for her role in Monster's Ball, making her the first WOC to win the Best Actress Oscar. A bold dress for a bold woman.

This right here is an iconic look Stefani is known for. Her outfit was everything punk, girl power, and self-confidence rolled into one. From the cropped pants and fish nets, to the bra and arm sock, this look perfectly captured that playful, devil-may-care attitude Stefani inspired in those watching.

When Beth Ditto took to the stage in this lycra-esque bodysuit in 2007, many fat positive babes everywhere weeped collective tears of joy over her smashing of arguably patriarchal and antiquated standards of beauty.

The trio was known for loud, matching outfits. But these denim, Robin Hood-inspired numbers were unforgettable. From the cheeky fedora with the feather, to the bomber jackets matched with lace-front jeans, this aesthetic was the perfect mix of Medieval and NYC.

Spears' lace number not only made many women watching at home buy see-through lace dresses of their own (I remember being 14 and begging my mom to get me one I saw in Charlotte Russe), but this was so quintessentially B. Provocative, flirty, and pushing the envelope.

One cannot see a tie draped over a tee without thinking of Avril Lavigne. She brought the Sk8ter Grl look to the mainstream, making us stack on the jelly bracelets and steal our dads' business ties when they weren't looking. Add a heavy hand with eyeliner, and you have the first half of the 2000s.

When you think of the word "iconic," Jennifer Lopez's Versace dress likely comes to mind immidiately. It's been 16 years and it's still brought up in conversation.

Mariah Carey is everything slinky, glamorous, and gorgeous, and what better piece to capture that than this slip? It was her go-to look when it came to the red carpet, and that column silhouette was synonymous with the diva's name.

While Kimmy K might have gotten a lot of steam for her bold choice of a dress back then, it's an iconic look now. Although most of the commentary was negative, that floral pattern is seared into most of our minds regardless. The haters might still be hating on the "couch dress" look, but there's a minority of us who still want to fist bump at her choice. Go Kim K, for embracing her pregnant body, not playing it safe, and ignoring silly fashion rules that tell us to blend in and hide.

AKA "the pizza dress," this wildly amazing look captured her attitude towards fashion perfectly: It was meant to be fun, experimental, and jaw-dropping. And she definitely hit all three.

No one, in the history of human beings, has ever thought to accept an award in an outfit entirely made out of meat. No one, that is, other than Mother Monster. Whether people thought it was a publicity stunt or social commentary, one thing is for sure: Lady Gaga knows how to command the attention of a crowd.

While these outfits are just the tip of the iceberg when it comes to iconic style, it's amazing to look back and see what fashions have defined the 2000s thus far. Now all that's left to wonder is what history-making sartorial gems will come from the rest of this nutty century.