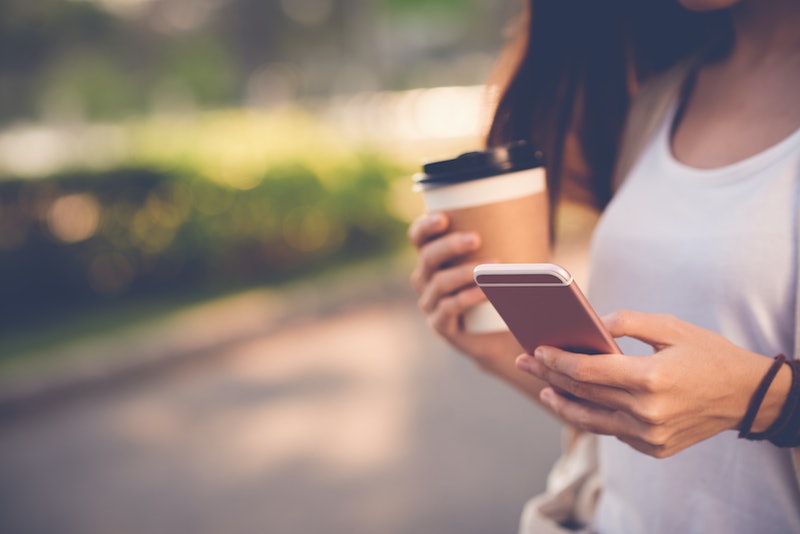 Do you have verbal conversations with sexual partners about consent? Have you ever asked a sexual partner if they have an STD? Have you ever been asked? An app called YES to SEX aims to combat campus rape, improve sexual health, and normalize discussions about consent by guiding partners through conversations about sex and safety, ending with a definite "yes" or "no" that both partners have to express.

YES to SEX conducted a national online survey of 1,000 millennials and Gen Zs, ages 15-25 years old, in order to reveal how we are communicating about sexual health. In addition to findings that demonstrate that many of us do not discuss sexually transmitted diseases with partners or ask for verbal consent, the survey also revealed that 68 percent of millennials and Gen Zs express regret over a one-night stand. While the survey did not elaborate upon why so many felt this regret, better communication, YES to SEX explains, will lead to greater safety and fewer regrets.

"I want to help change this rape culture on college campuses. Everybody knows somebody now that's been affected by sexual assault or rape on a college campus," Wendy Mandell-Geller, YES to SEX founder tells Bustle. Mandell-Geller wants to use "technology to empower people to be able to speak up about what is important to them when it comes to sex... women, [survivors], and men."

Mandell-Geller designed the app with Title IX in mind; when it comes to campus assault, the law states that verbal consent is mandatory. This is why the app guides users through a conversation. However, it can be used strictly as an educational tool as well, regardless if a sexual encounter is present. A "Preview Only" feature allows the user to see How-To-Consent demos without a partner. The official website explains that this "Preview Only" function is a great way for parents to introduce comprehensive sex education to their teenagers. Mandell-Gellar says, "Any parent can say to their child 'download the app,'" and have them go through the consent demos.

While YES to SEX is not for everybody — as not everyone is going to stop a sexual encounter and pull out their phones to come to a verbal consent agreement — the app has a much larger goal: education. "We're only part of a larger movement — it all goes back to how they teach consent in high school, in college." YES to SEX is just another way to teach young people how to talk about sex in a safe, consensual, healthy manner, and challenge the silence and scare tactics often present in sex ed. And for those who do use the app prior to sexual activity, says Mandell-Geller, "it will enable them, give them a clear voice for how to speak up."

Since releasing these survey findings, YES to SEX has started a social media contest called #AboutLastNight. Twitter users can go to the YES to SEX Twitter and use the #AboutLastNight hashtag to tell their "funny stories and experiences from 'the night before' to diminish the stigma associated with sexual health and consent conversations," as explained in a press release.

The purpose of this campaign and the app itself is to get young people talking in a way that will destroy rape culture. Mandell-Geller says, "The most important thing when I created the app first was how to say 'no'... to teach people how to accept 'no.' This app is just part of the movement to end rape culture."

What else does the YES to SEX survey teach us about how we discuss safe sex and consent?

Most Millennials And Gen Zs Are Not Asking For Verbal Consent

According to survey results, 79 percent — more than half — of Millennials and Gen Zs reported that they did not explicitly ask for verbal consent during their most recent sexual encounter. Explicit verbal consent is outlined in the Title IX requirements for college campuses, which is one of the many reasons that Mandell-Geller wanted to include it in the YES to SEX app — but it is also included a guide to verbal consent because our culture needs to move away from the notion of "blurred lines" and its disregard for people's, especially women's, bodily autonomy.

Why aren't people using verbal consent before a sexual encounter? Well, for one, in a rape culture, consent is often assumed or completely disregarded because of gender dynamics and the power dynamics inherent in those roles. This is the horrifying, misogynistic ideology behind why, for example, women are raped when they have fallen unconscious.

I also asked Mandell-Geller what people are misinterpreting or assuming to mean consent instead of verbal agreements. For one, as Mandell-Geller explained, people are not necessarily misinterpreting consent — they're not considering it at all. One of the app's goals, as outlined by Mandell-Geller, is to create an environment where consent is easily communicated, and to ensure that consent is "covered prior to sex as part of the foundation of our platform... to make it easy for partners to open up that conversation."

Most New Partners Do Not Ask About STI/STD Status

Survey findings showed that an overwhelming amount of millennials and Gen Zs, 84 percent, did not ask a new partner about STIs or ask about getting tested during their last sexual encounter. When you think about the stigma and lack of knowledge surrounding sexually transmitted diseases, it isn't surprising that these very common health issues are shrouded in silence. Stigmatization and lack of awareness can be attributed to poor sex education once again.

Mandell-Geller explains, "They might not even know they have an STD or STI, so it's really important to be able to say 'let's use protection.' In directly speaking to college students... they all say to me that it's extremely awkward to say 'let's use a condom' — especially for girls." Additionally, Mandell-Geller says that she often came across young women who guessed that birth control was enough, not considering the fact that only condoms prevent STDs; this demonstrates a gap in education that needs to be filled.

While she designed the YES to SEX app based off of Title IX regulations, Mandell-Gellar decided to expand her definition of consent to include a discussion about protection. In order to complete the consent checklist, "partners need to agree on protection or not. It is a different way of reminding them to consider using protection. These survey results are further proof that sex education needs to continue." Many of the users of the app have told Mandell-Geller that one of the best features is that "it makes it so easy to say 'Let's use a condom.'"

More like this
35 Sexy Texts To Send Your Partner
By Griffin Wynne and Carolyn Steber
What’s An Open Relationship, Actually?
By Lexi Inks
TikTok’s Viral “Rating Game” Is Exposing Everyone’s Icks
By Courtney Young
Are Cancer & Cancer Compatible In A Relationship?
By Kristine Fellizar
Get Even More From Bustle — Sign Up For The Newsletter