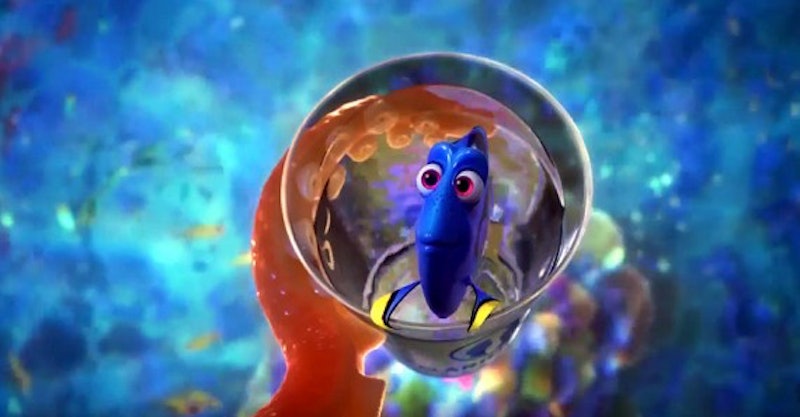 Here is a universal truth: Everyone on the planet is going to see Finding Dory in theaters. There's just no way around it. Disney has been killing it at the box office this year, with Captain America: Civil War, Zootopia, and The Jungle Book all making a fortune. But Finding Dory has the potential to surpass all of them. Families and kids will see this movie, single adults nostalgic for Finding Nemo will see it, teens will see it: It's a four quadrant movie if there ever was one. So since you're gonna see, the only question is: Should you see Finding Dory in 3D?

For the answer, you could probably look at the film's predecessor. When Finding Nemo debuted in 2003, cinema's third wave of 3D mania had not yet hit (Disney's first animated film to get a digital 3D release was Chicken Little in 2005), so Finding Nemo's original theatrical run was limited to 2D. But with the 3D craze taking over in the decade since the film's release, Disney made the decision to convert Nemo to 3D and re-release it in theaters in 2012, as they had successfully done for other 2D movies like The Lion King, Beauty and the Beast, and Toy Story. But did the 3D make it any better?

According to a number of critics, it actually did. I'm usually of the opinion that 3D typically doesn't add much to a film; especially if it comes in the form of a converted 2D movie. But apparently the underwater setting of Finding Nemo is practically tailor-made for the format, and the film's beautiful settings become even more gorgeous in 3D. Back in 2012, The Week rounded up a number of reviews that praised the 3D version of Finding Nemo , coming to the conclusion that a near-perfect film was somehow improved upon in what was easily Disney's greatest 3D reissue achievement. And in case that reaction isn't enough to convince you to watch Finding Dory in 3D, there's one more ace up the film's sleeve.

Finding Nemo was great as a 2D film that was converted to 3D, but Finding Dory is a native 3D film, meaning that it was filmed originally in 3D and did not go through a conversion. Many movies that are released today are released in 3D, but most are still filmed in 2D and then converted after the fact. Films that are filmed in native 3D (purists call this "real 3D" versus the "fake 3D" of converted films) are still pretty rare, but their effects are always more dazzling than converted films. Both The Jungle Book and Zootopia were filmed in native 3D, and both received extremely high marks for their effects. Finding Dory looks to continue that streak.

So with its underwater setting and native 3D production, coupled with the fact that Finding Nemo was greatly improved by a lower quality 3D conversion, it seems pretty clear that Finding Dory is going to be something special in 3D. So yeah, chip in the extra couple bucks and go for the glasses. You won't regret it.