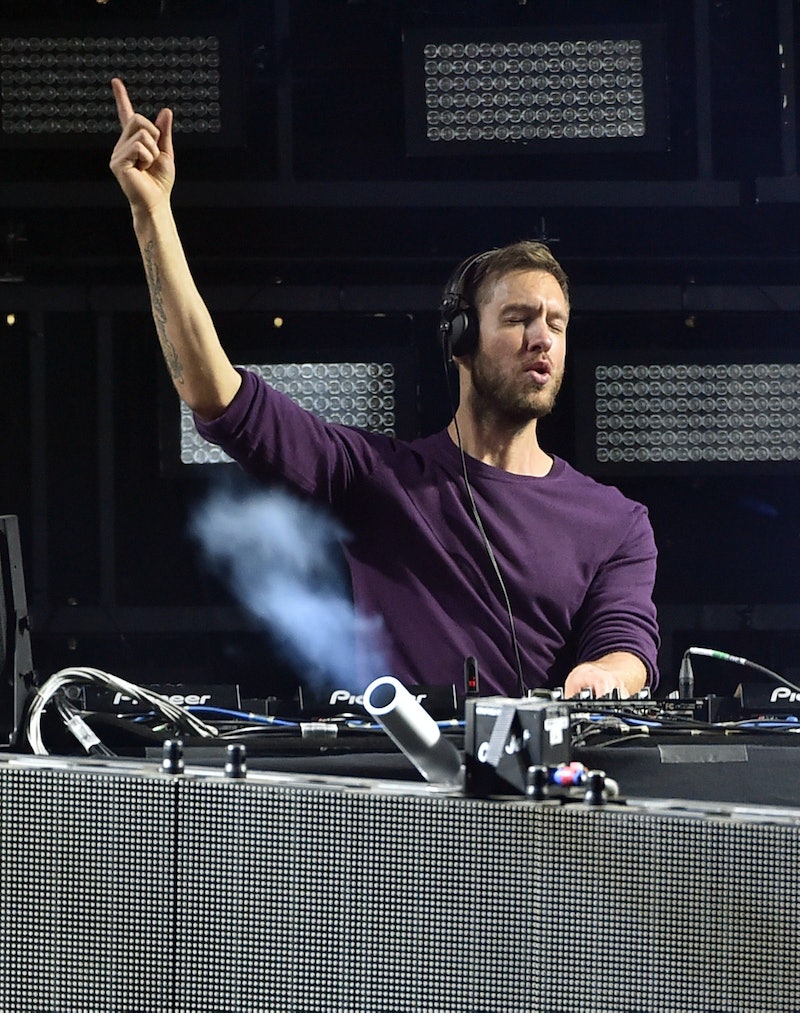 It's nearly three weeks later, but if I'm being honest, I'm still recovering from Taylor Swift and Calvin Harris' breakup. Sure, if the rumors are true, Swift may have already moved on (ahem, Tom Hiddleston?). But that doesn't mean her fans are totally over the end of #Tayvin. Those two just seemed so perfect together. Although Harris initially posted a post-breakup tweet about mutual respect between them, he deleted that post after Hiddleswift rumors spread. To make matters more interesting, Harris may have dissed Swift by wearing Yeezy sneakers. According to Us Weekly, he wore two different pairs — one on Thursday and another on Friday while leaving the gym.

If you're wondering why Harris' new footwear is significant, allow me to explain. Yeezy sneakers are designed by none other than Kanye West. The feud between West and Swift was reignited recently, thanks to the release of GQ's cover story with Kim Kardashian, in which the reality star insisted that Swift lied about not knowing West's "Famous" lyrics before the track was released. (You know, the song where 'Ye raps, "I feel like me and Taylor might still have sex / I made that b*tch famous.") The whole debacle remains quite confusing.

Not trying to make assumptions, but the timing of Harris' shoe choice feels too intentional to be a coincidence. And if that's the case, it's a bit petty, don't you think? Understandably the DJ could be hurt about Swift reportedly moving on (especially with the possibility the chemistry may have started at the Met Gala), but then again, she's a 26-year-old. If she wants to rebound or date other people post-breakup, she should be allowed. To quote her new frenemy Kim K, can she live?

Still, it's rather interesting that Harris would walk around in West's shoes, since it seemingly implies supporting West — someone who previously insulted his ex-girlfriend. For the record, isn't the first time Yeezys have been used in a Swift-related diss. Back when "Famous" came out, Tay's brother Austin very intentionally made a video throwing out his shoes designed by West. The shade was very real. Here's the video:

Although this is all amusing to watch unfold, using shoes for revenge feels very middle-school drama, not adult celebrities, who are living in the public eye. Can't everybody just get along? That includes putting the West and Swift feud to rest, too.