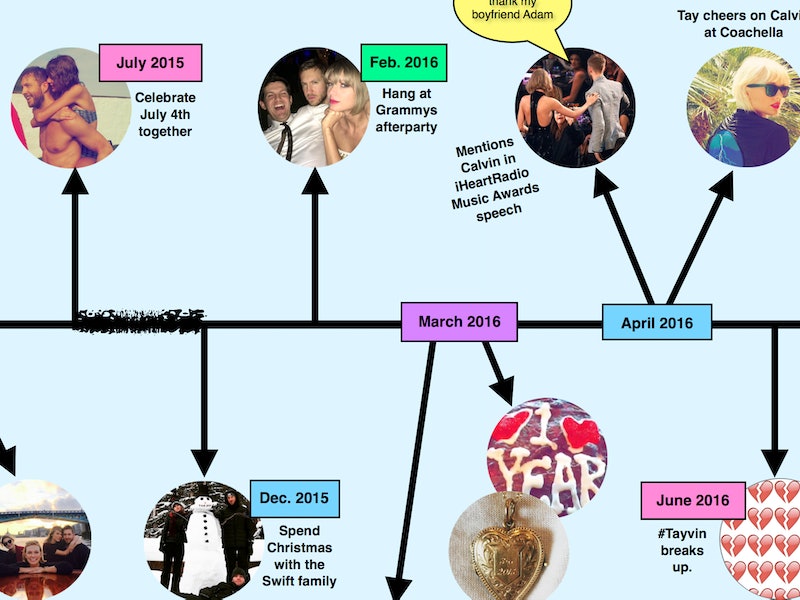 Does true love even exist? Honestly, I'm no longer sure after hearing Taylor Swift and Calvin Harris broke up. After 15 months of dating, the musical couple reportedly called it quits and I began to question if romance died right along with their relationship. Sure, it sounds extreme and usually I scoff when people get way too emotionally invested in celebrity love lives, but for some reason, this one hit me right in the feels. I guess it's because they just complemented each other so well. If you don't believe me, just look back at the highlights of Swift and Harris' relationship. And in case your memory is a little foggy, I've compiled all of that info into one convenient timeline.

Granted, I don't know Swift personally, but from my perspective as a fan, Swift's relationship with Harris seemed like her first, real grown-up relationship. By that, I mean she held her own and maintained her independence throughout. Not to judge her past love life, but with tracks like "Dear John," "I Knew You Were Trouble," and "Out of the Woods," her previous relationships certainly appeared rocky — almost like she lost herself in them a bit. That didn't seem the case with Harris; she simultaneously thrived in her career and personal life. But as the saying goes, "All good things must come to an end."

Naturally T. Swift break-up memes swiftly spread online, joking about how she'll get a really great album out of this heartbreak. But instead of jumping ahead, let's take a trip down memory lane. Here's a timeline of Swift and Harris' relationship.

Ahhh, the good, old days! They may no longer be together. But #Tayvin will always be in my heart — and that chart.