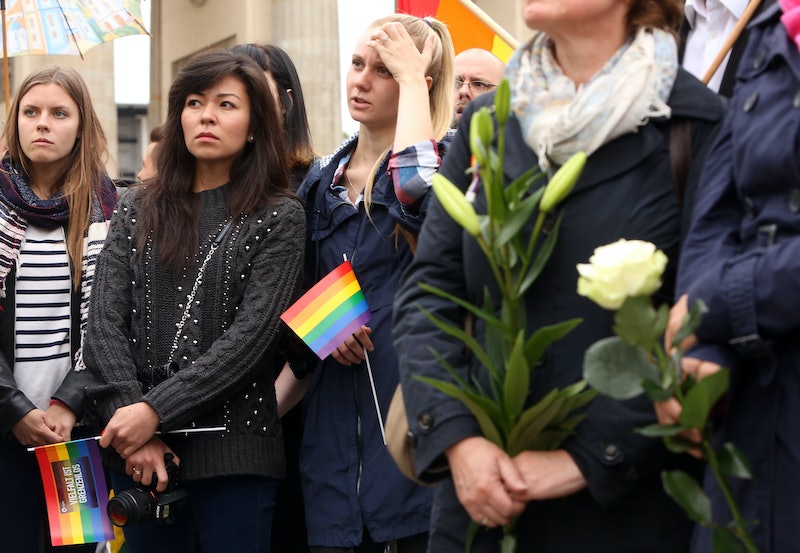 Although we've made headway in recent years with regards to LGBTQ rights, being an LGBTQ person still isn't easy in today's world. While many communities do play host to specific LGBTQ safe spaces, the sad reality is that the world remains largely an unsafe space; indeed, the places LGBTQ people get harassed are often the most mundane of locations, ranging anywhere from the street, to the subway, to their very own home. And it happens with astonishing frequency; if you ask many LGBTQ people when the most recent time they felt unsafe was, the answers are often things like, "This morning," "Today," or "Always."

It happens when I'm at home, or at school, or out getting some groceries. Someone might decide I'm "not feminine enough" and make assumptions about my sexuality; someone might assume that the person I'm with and myself are a couple, even if we're not holding hands, and proceed to harass us. If you think harassment is uncommon, or that it only happens in specific locations, here are 12 different places I've been harassed for my sexuality. They're places that you've probably been yourself — but for an LGBTQ person, the experience of simply existing in them can be fraught with danger.

While I was sitting in the waiting room reading a magazine with gay comedian Carmen Esposito on the cover, a stranger asked If I liked her. I responded yes. He snickered and muttered, "Dyke trash."

A couple of students from my one of my high schools found out I was gay because I had been outed by some former classmates. They saw me get out of my car in my driveway and yelled down the street, "How does pussy taste?" I wasn't out to my mom, so I was particularly terrified she'd hear.

All I wanted was some pistachio macaroons. Instead, I had to hear about how my then-girlfriend should really grow her hair out if she wanted to be taken seriously as a woman in the world.

5. The Neighborhood I Grew Up In

I grew up in Seattle, but even though it's a pretty liberal city, I still got criticized at for walking hand in hand with another girl in my neighborhood. Surprisingly, it was by a gay man who told me I should keep a low profile so I didn't give "the community" a bad name.

During a trip to Atlanta, a man I enountered on a tour of a newsroom assumed I was a gay. His assumption was correct, but when I asked him why he made it in the first place, he responded, "The man hair and all your man piercings. That doesn't fly in the South, honey."

Many people think I can hold hands with my partner in wealthy neighborhoods or on subway lines that cater mostly to wealthy communities. However, wealth has nothing to do with how much homophobia I'll experience on the street on a day-to-day basis. I've been stared or scowled at multiple times in wealthy neighborhoods in cities ranging from Seattle to Boston to New York.

I used to own a pin I wore on my purse that depicted two women holding hands. I was carrying the purse on a day when I was on a quest to find the perfect matte lipstick, only to have a lady approach me in the store and tell me that I was "too pretty to be gay." I politely explained to her how offensive that statement was, but she insisted my orientation was "just a phase."

9. While Canoeing In The Middle Of Nowhere

During my junior year of college, I went canoeing with a couple of classmates. A boy on the trip asked if I would sleep with him. When I denied him, he insisted that he could "turn me" — as in, "turn me straight" — if I just let him try.

Whether I'm alone, with my partner, with someone who fits the mold of someone who "looks gay," or just reading a book, I can usually count on someone saying something homophobic to me if they even get a whiff of my sexuality. This has happened on public transportation more times than I can count.

My online dating account is set only to women, and yes, I still get harassed on it. Often, women message me telling me about how much they "love chocolate" — presumably a reference to my brown skin — or how they've never had sex with a brown girl before. This is not flattering. It's fetishizing.

12. By A Teacher, In The Classroom

During a class discussion on the queer liberation movement during my junior year of high school, my history teacher told me I was too radical in my viewpoints. When I asked him what he meant and how he would define "too radical," he got angry and told me that the only reason I had the viewpoints I had was because I'm gay, thereby undermining my intellegence and opinion entirely.