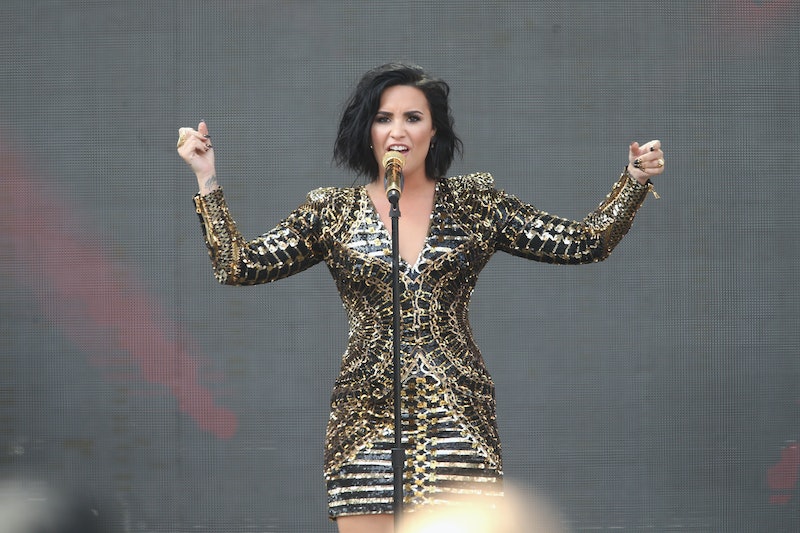 Demi Lovato has proven once again that there is no stopping her. Just weeks after writing and recording it, Lovato released "Body Say" in the wee hours of Friday, July 1. She shared her new single on Spotify, Apple Music, and Google Play, tweeting at 12:01 a.m. that she "wanted you guys to hear it right away." While she'll be performing the sexy song during the Future Now tour with Nick Jonas, Lovato has given fans the gift of listening to her new music from the comfort of their own homes and Lovatics should be thankful for this sultry gift that Lovato has bestowed.

Lovato kicked off her summer tour with BFF Jonas on June 29 in Atlanta, Georgia where she premiered the new bedroom jam. It had been revealed earlier that day by the Future Now Twitter account that Lovato would be performing a new song for the tour and the tweet included the cover art for the single. If you saw the cover art before you heard the single, now you know how spot-on the photo of Lovato topless in bed is since the song is unabashed in its description of sex with the lyrics for the chorus going, "You can touch me with slow hands/Speed it up, baby, make me sweat/Dreamland, take me there cause I want your sex." Lovato is definitely letting her body do the talking in "Body Say."

Although Lovato had quit Twitter and Instagram on June 20 because she had enough with negative comments (totally can't blame her), she thankfully returned less than a day later. The singer promised that she was "coming back more honest than ever" and clearly she's not letting the haters get her down by releasing her body positive cover art for "Body Say" only a few short days later.

Lovato has been an icon of body positivity through her words and actions, so not only is the artwork for "Body Say" perfect, but so is the content of the song. She's a 23-year-old woman who isn't afraid to say what she wants. She has been open with fans about her body image, her struggles with addiction, and her mental health through interviews and social media, and Lovato continues that trend of honesty in her songwriting, as "Body Say" more than highlights.

Even if you aren't going to see her tour with Jonas, you can listen to Lovato's new single over and over again without shame, thanks to this pretty impromptu release. And if you're feeling her views on sex, make sure to blast the song because, like Lovato has sung before, "What's wrong with being confident?"