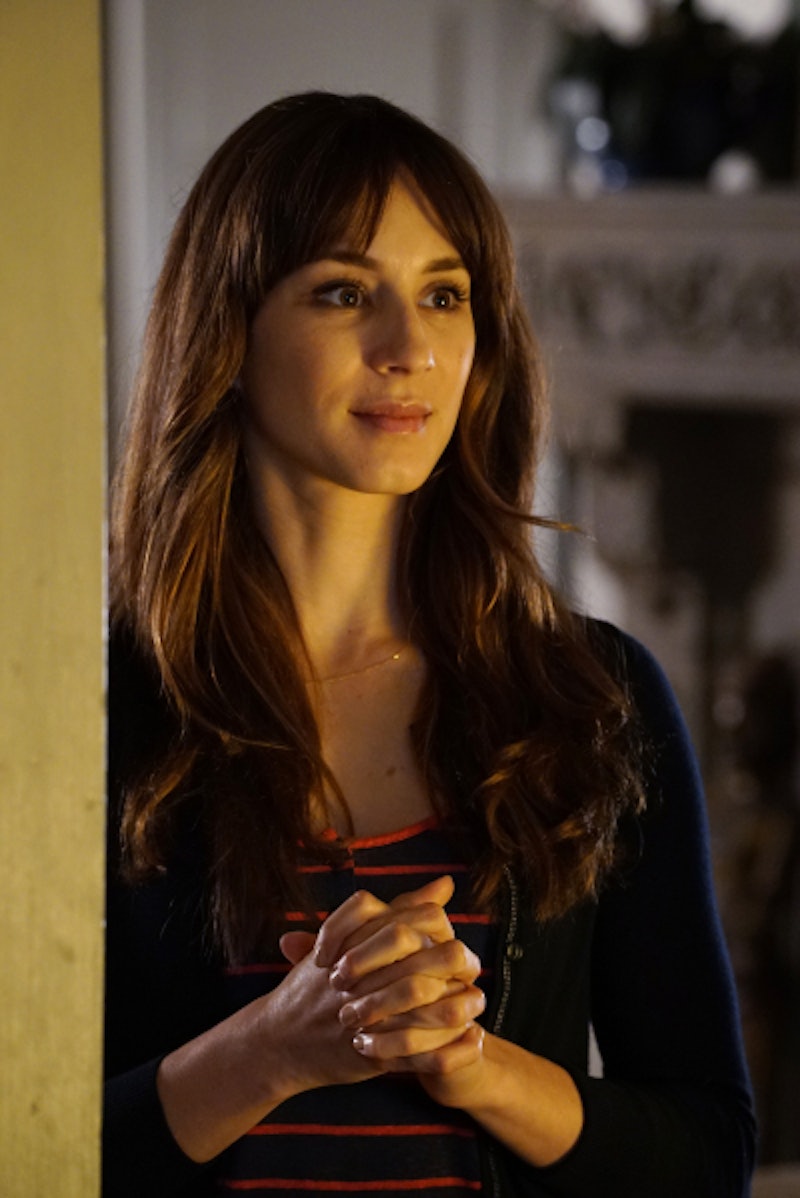 Anything is possible on Pretty Little Liars and, if the first three episode of Season 7 are any indication, we're in for a whole lot of twists and turns. Although the twin reveal we'd all been waiting for happened in the Season 6 finale, that doesn't mean Jessica DiLaurentis and Mary Drake are the only set of twins on the show. In the Season 7 premiere, there were a number of hints that Spencer may have a twin — and I wouldn't rule out the possibility. Although I'm definitely on board with the increasingly popular fan theory that it's Bethany Young, there's someone else who hasn't been discussed — could Jenna Marshall be Spencer's twin on Pretty Little Liars?

Not all twins are identical and Mary's comment that Spencer and Melissa used to look like twins seemed more like a hint than a plausible possibility. Jenna will return to Rosewood in the July 12 episode "Hit and Run, Run, Run" and it's safe to assume that she's going to shake things up in more ways than one. It may be a bit of a stretch, but here are a few reasons why I think we should look be on the lookout for clues that Spencer and Jenna are fraternal twins.

Her Background Is Mysterious

Jenna has been on Pretty Little Liars since Season 1, but we don't know anything about her biological family. She moved to Rosewood when her mother married Toby's dad, but Jenna's mom has never been shown onscreen or discussed — so that leaves the door wide open for showrunners to come up with a backstory about how and why Spencer and Jenna were separated at birth.

Plus, we don't know anything about Jenna's life before she moved to Rosewood in high school — but it's possible that she spent time at Radley as a child. I still think that she's involved in the A game and we know that everything leads back to Radley. In the beginning of Season 6, Spencer had a dream in which a little girl credited as "Creepy Dancer" (played by Maddie Ziegler) was shown at an abandoned Radley. Maybe her subconscious was trying to tell her that she has a twin out there.

In Season 4, Veronica spoke to Spencer about her unpredictable, erratic behavior the summer Ali went missing. She specifically stated that, “it was as if there were two of you living in this house — the Spencer we recognized and your evil twin." Jenna is definitely still on the Uber A suspect list, so perhaps Veronica's comment about an evil twin was more literal than we ever realized.

In the Season 5 episode "March of Crimes," Emily and Spencer found out that, contrary to what Sydney had told Emily, she and Jenna had been friends for several years and she'd come to Rosewood to support Jenna when Ali returned to town. The strangest aspect of this friendship was that Jenna and Sydney were dressed identically when they went to the optometrist's office and the reasoning was never explained — perhaps this was a hint that Jenna has an actual twin.

She'll Be Important To Season 7

In an interview with Teen Vogue, Tammin Sursok said she doesn't know whether or not Jenna is Uber A — but "she is heavily, heavily, heavily involved with the Liars in the upcoming storyline." This could go in a number of directions, but it makes me wonder if the Jenna will be revealed as Spencer's twin. It would certainly shake things up because, as we know, there's never a dull moment in Rosewood.