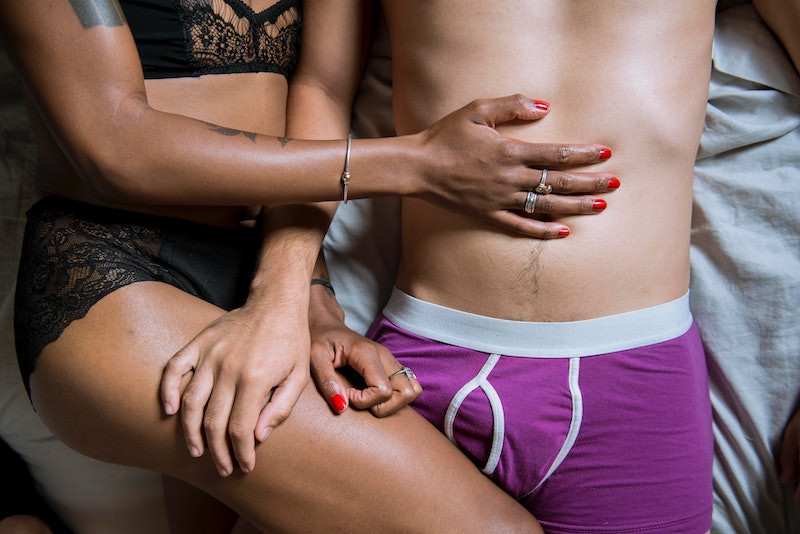 Societal inequalities affect the most private, intimate parts of our lives, largely because we experience sexism not only at the hands of others, but also at our own hands — and what makes it so insidious is the fact that we don't always even realize we're doing it. Once you become aware of it, though, you may notice a number of subtle ways internalized misogyny affects your sex life. Patriarchy is sneaky like that: it shows up without announcing itself in the most unexpected places. Even your bedroom.

While issues like reproductive rights and wage equality have been on the feminist radar for a while, we still don't always talk openly about sexual inequality. This may not be a life-or-death issue, but it does matter. When we take something like sex, which has the potential to be one of the most enjoyable experiences of all time, and make it into something fraught with disempowerment, anxiety, negativity, and trauma, we keep people — frequently women, but generally anyone other than straight, cis men — down in a very real and wide-reaching way.

For example, from a young age, women are taught that the main purpose of their sexuality is to please others — especially men. Even women who don't date men often feel this. The impression we get through media objectification, poor sex education, and conventional wisdom is that our sexuality exists for other people. This is just one way we're taught that we exist for other people. And the scariest part is that even when we know this isn't true, part of us comes to subconsciously believe it.

Here are some ways you may have noticed internalized misogyny creeping into your sex life. It's not your fault, but it is something you and potentially your partners might want to be aware of to work through together.

No matter how it's measured, it's pretty clear that women in heterosexual relationships tend to get the short end of the stick when it comes to sexual pleasure. One study in the Journal of Sex Research found that teens view oral sex as a bigger deal when it's performed on a woman. Another study found that more college men than women had received oral sex during their last hookups. And Cosmo 's orgasm survey found that only 57 percent of women orgasm at least most of the time they have sex, while 95 percent say their partners do. Regardless of who you're sleeping with, if you feel like your pleasure should not be the priority, there are probably a lot of gender norms at work.

3. How We Think About Positions

We frequently consider both sexual positions and relationships through a strictly heternormative lens: Some people are "tops" and some people are "bottoms," and the people who are "tops" are usually considered the "man" in the relationship. But this line of thinking — one that equates being on top with power, and power with men — is harmful to everyone, no matter what kind of relationship you're in. In heterosexual relationships, it makes the default "man," which comes with its own form of baggage for everyone involved — for example, women might be mocked for being the dominant one in the relationship if they're the "top" (because everyone knows it's unnatural for women to be dominant), while men might be mocked for not being the dominant one in the relationship if (because the bottom is for women and women are weak; therefore a man on the bottom must be weak like a woman). Furthermore, the very idea of "tops" and "bottoms" shoehorns the huge array of types of relationships that exist in the world into the same heteronormative mold, effectively erasing LGBTQ people and relationships. In reality, not every relationship has a "man" and a "woman," and not every sexual encounter involves someone being on top and someone being on bottom — either literally or metaphorically.

Unfortunately, being pressured into sex by someone else is extremely common. But what's also common, though less frequently discussed, is pressuring ourselves into sex because we feel we have a duty to please our partners. After hearing about the supposed harm inflicted by "blue balls" or being taught that our value in relationships lies in our ability to "provide" sex (as if it's not something to do for ourselves), we come to believe our consent matters less than what our partners want from us.

In addition to feeling guilty for not having sex, pretty much everyone except straight, cis men are taught to feel guilty for having it. This may come out in subtle ways, like counting your "number," wondering if you're "disrespecting" yourself, or feeling like you have to seriously date someone once you've slept with them, even if you really don't want to be in a relationship with them. While we often consider straight men who are openly sexual or have casual sex to be normal, we judge everyone else — frequently straight women, though it's certainly not limited to that one particular group — to either be wild party animals or have low self-esteem. This judgement often comes from other women and even from ourselves, and while larger societal forces created it, individuals can still challenge it.