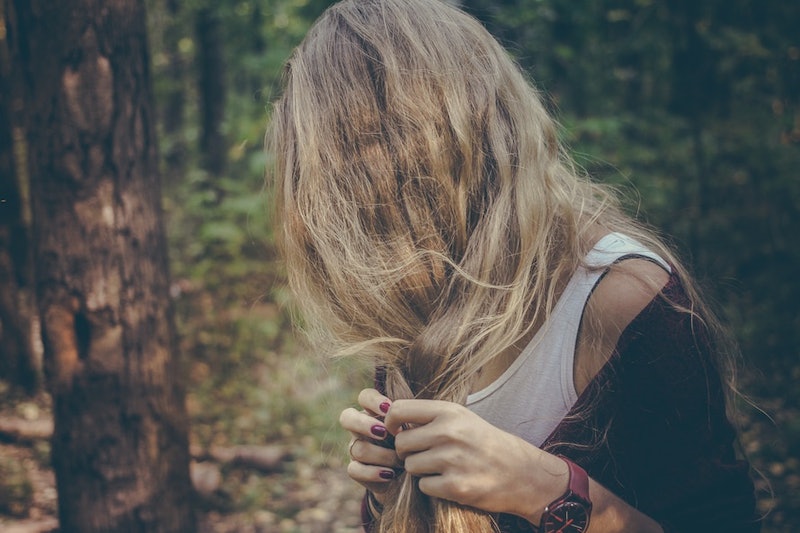 What I'm about to tell you will sound harsh at first, but I promise I'm not just being a giant jerk. When I was a Domestic Violence Victim Advocate and Planned Parenthood Certified Responsible Sexuality Educator, I helped more couples through more breakups than you would believe. And up until then, I had no idea how much guilt people carried around with them when essentially all they did was make the right choice for themselves.

Guilt implies you did something wrong. Doing what's best for you is never wrong. You should never let feelings of guilt get in the way of you doing you. Sadness, anger, and all those kinds of feelings are normal and healthy breakup fodder. But guilt can really be a problem. It can hold you back from making a good decision. It can make you way more miserable than you need to be. It can keep you trapped in a prison of other people's opinions. It's the worst. So forget about being a jerk for a second, and read this list of things you don't have to feel guilty about. Because you don't need to feel guilty, and deep down, you know it.

Dumping your partner sucks, especially if they didn't do anything wrong, and they're basically awesome. But they could be Adele or one of those guys from One Direction, and still not be the right fit for you. You don't have to be with anyone, ever, for any reason. If you want to end a relationship, you have the right to do so without feeling guilty. Guilt implies you did something wrong. You can be upset for a hot second, but it's better to focus on the fact that you know in your heart you did what was best for you.

2. Not Having A Reason

3. Removing Them From Social Media

After a relationship ends, you gotta do what you gotta do in order to move on. Sometimes that means removing your ex from social media, or locking down your accounts so your ex can't sad stalk you. Don't get mixed up in guilty feelings like "it's mean" or "they didn't do anything wrong." It's not about being mean. It's about creating a healthy boundary that will support you in healing. You're allowed to do things that are necessary to your happiness, even if others might not agree with those choices.

4. Not Wanting To Be Friends

People who are friends with their exes are weird to me. My wife is besties with all her exes. To me it's like, "Hey, wanna hang out and remind each other about all the pain and misery we went through and also not touch each other or do the things we're used to doing together?" Nah. If you're like me and need that separation, at least until you're totally over it, you don't have to feel guilty about that. Sometimes cutting off contact is the best and healthiest thing you can do. On the flip side, if you like being friends with your exes, don't let anyone make you feel guilty about that either.

5. Wanting Your Stuff Back

Your stuff is yours. It's your property. It belongs to you. You are allowed to ask for it back. You don't have to feel guilty about upsetting your ex or taking something away from them that they use or really like. If it's your stuff, and you're not together anymore, then you have a right to take it. It gets a little dicey when you're talking about shared purchases and gifts, but as far as stuff that's clearly yours, no guilt necessary.

Breakups hurt. Period. We all get dumped, or at least experience some kind of heartbreak in our lives. It's part of the journey. You can't stay with someone because you don't want to hurt their feelings, or delay doing what you need to do because you feel guilty about hurting them. Feelings are going to get hurt. They'll hurt worse if you drag things out. Plus, not to sound like a giant assh*le, but your soon-to-be-ex's feelings aren't really your problem anymore. Harsh, I know, but also true.

I've lost some awesome dating-in-laws and mutual friends after breakups. It sucked, but that's just how it goes. No matter how much you love your partner's mom, or will miss their besties, you can't feel guilty about it. It's just part of the process. You can feel sad about it, but don't weigh yourself down with guilt and regret. You're not doing anything purposely to hurt them. You're doing what you need to do in order to be happy. Plus there's no law that says you can't maintain a relationship with them after the breakup, if everyone's on board.

8. Everything They've Done Or Bought For You

When I worked at a shelter, I talked to a person who felt guilty breaking up with their partner because their partner had paid for them to go to college, and had bought them a car. I get where those feelings of guilt might come from, but when you're with someone, the things they do for you should be acts of love and kindness that they wanted to perform, not things they do so you'll owe them in the future. You can't let guilt over that sort of thing tie you to someone you don't want to be with. If it's that big of an issue, offer to pay them back, but don't be trapped by that guilt.

9. How Your Friends And Family Will Feel

No. Nope. Breakups are hard enough when you just have to deal with your own feelings. You can't get caught up in guilt over how every single person who is in your lives will feel after you split. Breakups are hard. My mom felt like she lost a child after I broke up with someone I'd been with for years. But that doesn't mean we should have stayed together. Focus on your own feels and don't complicate things any more than they already are.

If you break up with someone and they're devastated, yeah, that's hard, because you had a bond with that person. It's never easy or fun to break someone's heart. But you're responsible for your own feelings. You're not responsible for their feelings. If, weeks after your breakup, you find out their not taking it well, and they're not going to work or leaving the house, you can't rush in and try to save them, no matter how guilty you feel. You're not the one. It's not your place.

Whether it takes you a few weeks or a few seconds to be over your relationship and onto a new relationship is none of your ex's concern. They're entitled to feel however they want about it, but you're not obligated to share in those feelings. If you meet someone the day after you end a long relationship, and you decide to go out on a date, you do not have to feel guilty about that. You don't have to respect your ex's feelings by waiting X amount of time before seeing someone else.

Once you realize you don't have to feel guilty, doing what you need to do will be much easier.