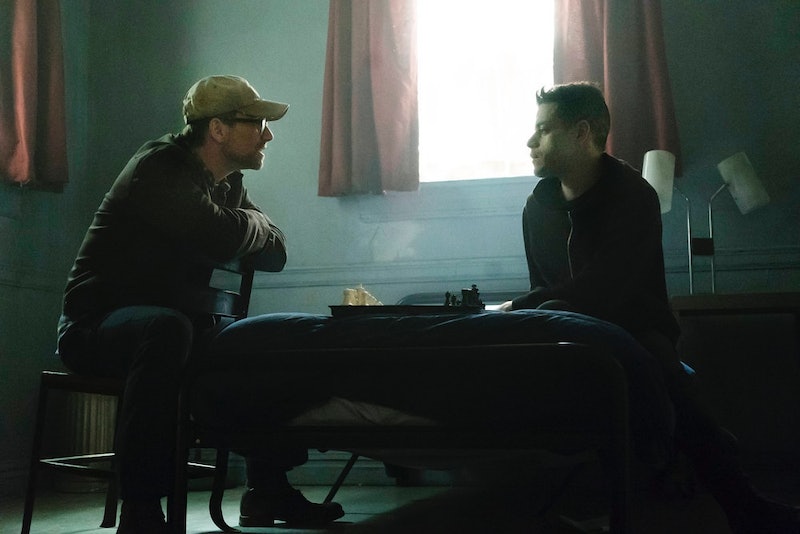 When the first season of USA's acclaimed drama Mr. Robot ended, the mind of our protagonist, Elliot Alderson, was in a fragile state. After learning that his chatty companion Mr. Robot was actually his dead father who only existed inside his head — and that his hacker cohort Darlene was actually his sister — Elliot's brain essentially shut down, blacking out for three days while he pulled off the Evil Corp hack. So how is he doing in Season 2? Not much better, I'm afraid; despite his best efforts to relcaim his sanity, Elliot and Mr. Robot are at war.

In the aftermath of the Five/Nine attack (as it has come to be known) and Tyrell Wellick's mysterious disappearance, Elliot cut himself off completely from the technological world. He exiled himself to his mother's house, he grants himself no internet access, and he keeps himself to a repetitive routine every day that involves no contact with his former life. He even keeps a journal! But if Elliot thought healing his mind would be that easy, he was in for a rude awakening… literally. An awakening that came in the form of a bullet to the head, courtesy of Mr. Robot.

Fortunately, imaginary bullets can't kill. Unfortunately, cutting himself off from computers didn't exorcise the demons inside Elliot's mind. In fact, it has just made Mr. Robot more desperate to take control so that he can finish what fsociety started. Despite scribbling "I am in control" over and over and over again in his journal like Jack Torrance at his typewriter, the opposite appears to be the case. Mr. Robot is still very much there and — as is revealed late in the premiere — takes control every time Elliot falls asleep.

But Elliot realizes there's at least one way he can exert power over his imaginary friend: by denying him the thing he so desperately wants. Elliot's plan is to drive Mr. Robot even crazier than himself by refusing to give in to his demands, until Mr. Robot cracks and tells him what happened during his three-day blackout — and what happened to Tyrell.

The question is… who can hold out longer, Elliot or Mr. Robot? Who will go crazier faster? Sure, Elliot has a head start, but he also has newfound resolve to defeat his demon. One thing is for sure: those twists at the end of last season changed the show forever. Now Mr. Robot is all about the war for Elliot's mind — and we probably shouldn't trust anything we see.