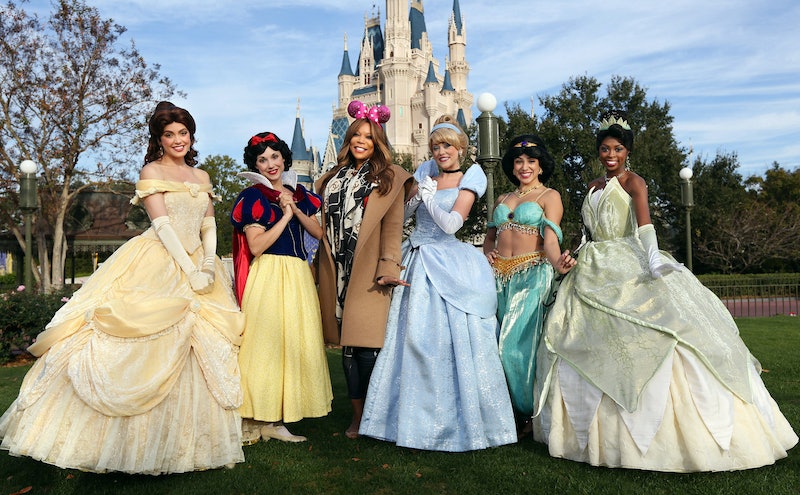 Even before Frozen came along and gave us the empowered Anna and Elsa, Disney princesses have been kicking booty (in their own problematic way of course) for some time now. From live-action remakes to online parodies and everything in between, our culture is obsessed with Disney princesses — even as it berates them for being bad role models for the little girls who love them most. While there are certainly some important critiques to be made about these movies, I think it's also time we look at some of the positive messages they delivered.

I stand as living proof that it's possible to be raised on Disney and still grow up to be a feminist. You couldn't find a bigger Disney princess fan than me in the '90s. I watched these movies over and over until the VHS tapes were worn out. I dressed up like princesses for Halloween (though any normal afternoon was also fair game) and stood in awe of their impersonators when I first visited Disney World. Yes, I watched Ariel literally trade her voice for a man and Cinderella lay in wait for Prince Charming to come rescue her, and yet here I am, still a proud, Disney-loving feminist.

Perhaps I can say that because many of these classic princess movies also included some pretty cool, feminist moments. Here are some of my favorites.

The first time we meet Belle, she's strolling through her small French town, bemoaning its lack of excitement and adventure — which she seeks out in books. It's apparently weird for a woman in her town to enjoy reading and have any kind of imagination, but Belle doesn't care. She's true to herself and her passions and doesn't let other people's criticisms bother her.

This song also leads in to Belle's rejection of Gaston, who's your prototypical alpha male douchebag. She doesn't care about his looks or muscles, and turns down a sought-after man's proposal because he's an arrogant pig. An intelligent, adventurous, bookish, imaginative woman who doesn't care what people think and values character over physical appearance? Not too bad a role model.

Lesson: Never Settle. It's OK to Be Smart.

"Part of Your World," The Little Mermaid

Similar to Belle, Ariel isn't happy with her limited surroundings and wants to explore something new. Even before she saw Prince Eric, Ariel was infatuated with the human world and collected whatever artifacts she could to try and understand them. Ariel wants to actually experience the human world for herself, even as everyone tells her to stay where she supposedly belongs.

Ariel even refers to herself as a "bright young woman" as she yearns to explore an unfamiliar culture. Yes, the voice-trading and what follows are unfortunate to say the least — but Ariel's intentions are pretty damn cool.

Lesson: Don't Let Anyone Tell You Where Your Place In The World Is

The very concept of this song is a play on gender stereotypes. The army Captain Shang taunts his soldiers for not being real men as they struggle with his training exercises, until one 'man' succeeds — Mulan. The moment when Mulan gets to the top of that pole has always been epic, but looking at it now, it makes me choke up. The whole sequence makes the eventual big reveal that she's a woman even more empowering.

Lesson: Girls Can Do Anything Boys Can (And Sometimes, They Do It Even Do It Better)

"Colors of the Wind," Pocahontas

Pocahontas' most memorable song sees her standing up for herself and defending her tribe to John Smith, the man she's falling in love with. Rather than listen to everything he says and let him insult her lifestyle and heritage, she spends the song exposing him to her world, because who wants a guy who doesn't respect you?

Meg isn't technically a princess — though I'm not sure what your title becomes when you marry a demigod. Still, she has a lesson to impart as the female love interest in the underrated Hercules. From early on, it's made clear that Meg has never actually been a damsel in distress — she just plays one to trick men. She knows exactly what she is doing, and is very self-sufficient.

Lesson: You're Allowed To Be Conflicted

Princess Jasmine's entire storyline throughout Aladdin is pretty awesome, but when she meets Aladdin we learn just how strong-willed and independent she truly is. The pair first meets after Jasmine has run away from the palace to escape an arranged marriage. She's determined to live her life the way she wants to, rather than letting others make her decisions for her.

The only reason she returns to the castle is to stop the guards from taking Aladdin, and even there, she continues to protest her father's rules. Jasmine may not be the movie's main character, but she's one of Disney's most spirited, rebellious princesses.

Lesson: Your Values and Freedom are Worth More than Money and Status

So before you discount all these princesses as problematic, try to consider their positive attributes as well. That said, stay away from Snow White and Sleeping Beauty. Not much to learn there besides the danger of fruit and power of sweeping.

More like this
Trevor Noah Hilariously Clapped Back At Racist Attacks On ‘The Little Mermaid’
By Brad Witter
12 ’90s Movie References You Missed In 'Do Revenge'
By Radhika Menon
15 Offensive AF Jokes In 'Friends' That Really Aren't OK
By Tolly Wright, Bustle Editors and Meguire Hennes
Harry Potter's Viktor Krum Has Undergone A Huge Transformation Since Hogwarts
By Sam Ramsden and Meguire Hennes
Get Even More From Bustle — Sign Up For The Newsletter