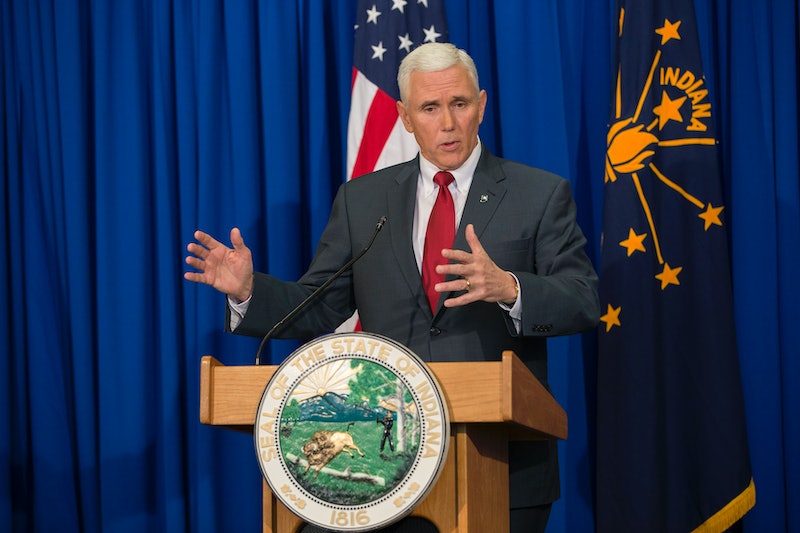 Earlier: Reuters reporting from Roll Call announced Thursday that Donald Trump has chosen Indiana Governor Mike Pence as his running mate. Nothing has yet been confirmed as to Trump’s Vice-Presidential pick, but the suggestion that Pence may be the potential nominee raises the questions, “What experience does Mike Pence have? How is he prepared to be the potential nominee for Vice President?” Keep in mind that this news is still tentative. The New York Times reports that, even though Trump’s “campaign has signaled strongly to Republicans in Washington” that Pence will be selected as running mate, “Republicans caution the party’s mercurial presidential candidate may still backtrack on his apparent choice.” Trump is slated to formally confirm his pick for running mate on Friday at 11 am. In the meantime, let’s take a moment to get to know Governor Pence.

Mike Pence is an Indiana native, known for socially conservative views and a "calm demeanor." Before taking public office, he worked in talk radio, at one point describing himself as “Rush Limbaugh on decaf.” Pence was elected to the U.S. House of Representatives in 2001, and represented Indiana there for 12 years, from 2001 to 2013, rising in the ranks of the Republican leadership and serving on the House Foreign Affairs Committee. He took office as the Governor of Indiana in 2013. As governor, Pence eliminated the estate tax and pushed through the largest tax cuts in the state’s history.

Popular among religious and social conservatives, Pence once described himself as “a Christian, a conservative and a Republican, in that order.” He has consistently skewed to the right in his positions, on a variety of social issues. He has, for example, campaigned throughout his career against expanding protections and rights for LGBT people. More than once as a congressman, he supported measures that would have defined marriage solely as a union between a man and a woman; he opposed the repeal of “don’t ask, don’t tell”; and as governor, he urged the state to ban same-sex marriage. In 2015, he sparked headlines when he signed off on the Religious Freedom Restoration Act, a law allowing individuals and businesses to use their religious beliefs as a defense in court proceedings. Many opponents argued that the law effectively permitted businesses to deny service to LGBT people, on the grounds of religious belief. The law caused a national uproar, and eventually Pence was forced to dial back his support of the law and add text banning businesses from denying service to customers because of sexual orientation.

Pence is also a vocal opponent of abortion, having once said, “I long for the day that Roe v. Wade is sent to the ash heap of history.” As a congressman, he voted numerous times against federal funding for abortion, as well as human embryonic cell research, and campaigned to defund Planned Parenthood. In March of 2016, Pence signed a bill outlawing women from seeking abortions due to genetic abnormalities of the fetus, a measure so strict that even some fellow Republicans opposed it. The law also required that fetal tissue be buried or cremated. A federal judge blocked the law in June.

If Mike Pence is selected to be Trump’s running mate, Pence, known for being cool and collected, would serve as a counter point to Trump’s more openly aggressive personality. He also could bring along religious conservatives, who have so far had an uneasy relationship with Trump. However, Pence is a polarizing figure in himself, and has more than once courted controversy with his conservative social agenda. Will he be the Republican nominee for VP, as predicted? We’ll find out for sure tomorrow.

More like this
How To Protect Your Digital Privacy If You Need An Abortion Post Roe v. Wade
By Kaitlyn Wylde
How To Fight For Reproductive Rights, Based On How Much Time You Have
By Courtney Young
23 Abortion Funds In States With Trigger Bans To Donate To
By Emma Carey
Here's Your Daily Horoscope For May 18, 2022
By Mecca Woods
Get Even More From Bustle — Sign Up For The Newsletter