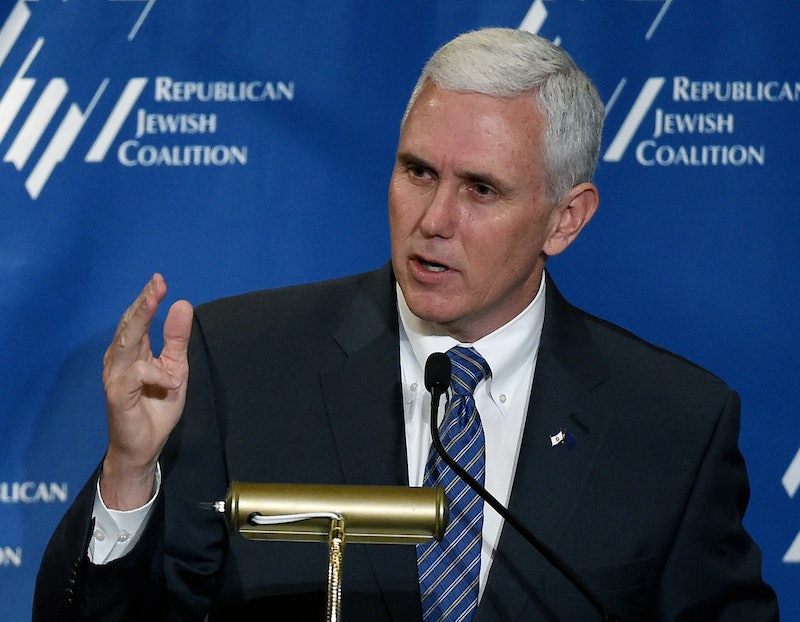 Earlier: On Thursday, Reuters reported that Donald Trump will pick Mike Pence as his running mate in the 2016 election. The rumored VP choice is being seen as Trump's way of unifying the Republican party. The conservative Indiana governor, who has 12 years of legislative experience, is also an evangelical Christian, which could help Trump gain support among religious conservatives. According to Reuters, "Trump was reportedly impressed with Pence's calm demeanor, his experience on Capitol Hill and as a governor, and Pence's potential to assist in governing if Trump wins in November."

Trump will be formally nominated as the Republican presidential candidate in the 2016 election at the Republican National Convention next week in Cleveland, and the formal announcement for Trump's running mate is scheduled for 11 a.m. Friday in Manhattan.

However, Trump's campaign hasn't confirmed that Pence will be Trump's running mate just yet. Senior communications adviser Jason Miller said on Twitter, “A decision has not been made by Mr. Trump. He will be making a decision in the future and will be announcing his Vice Presidential pick tomorrow at 11 am as planned."

Until we know who the VP pick is for sure, here's what you need to know about Gov. Pence, and why his name may sound familiar:

1. He's Got Major Beef (And A Lawsuit) With Planned Parenthood

If Planned Parenthood wants to be involved in providing counseling services and HIV testing, they ought not be in the business of providing abortions. As long as they aspire to do that, I’ll be after them.

Pence is also involved in a ACLU and Planned Parenthood lawsuit from earlier this year after he signed a controversial abortion bill that would ban abortions that were based on fetal abnormalities, as well as the race or sex of the fetus, and would criminalize the doctors providing the service.

According to The Chicago Tribune, Ken Falk, legal director of the ACLU of Indiana, "The United States Supreme Court has repeatedly stressed that a woman, not the state, is to determine whether or not to obtain an abortion. The State of Indiana's attempt to invade a woman's privacy and to control her decision in this regard is unprecedented and unconstitutional."

After Pence signed Indiana's controversial anti-abortion bill, an anonymous pro-choice advocate launched the Facebook page Periods for Pence to encourage Indiana women to call up Gov. Mike Pence and fill him in on the details with their menstrual cycles because he seemed to be so concerned with women's bodies.

While Trump's highly controversial proposal to ban Muslims from entering the United States after the San Bernardino shooting last December didn't sit well with Democrats and Republicans alike, it looks like his rumored running mate didn't approve of the plan either.

Gov. Pence tweeted in December, "Calls to ban Muslims from entering the U.S. are offensive and unconstitutional. Our Constitution guarantees the free exercise of religion. The U.S. cannot discriminate on the basis of religion." If Pence is Trump's running mate, it'll be interesting to see how they compromise on this one.

5. He Has An Anti-LGBT Record

As far as his stance on LGBT issues? Those aren't looking so great either. As a congressman, Pence supported a constitutional amendment to ban same-sex marriage. He also signed the Religious Freedom Restoration Act in 2015, a bill that would have allowed business owners to discriminate against LGBTQ people with their religious beliefs as the excuse. Though, he later signed an amendment that prohibited businesses from denying services to someone based on their sexual orientation.

More like this
How To Support Gun Control Reform Right Now
By Morgan Brinlee and Carolyn Steber
The Church Of Scotland Votes To Allow Same-Sex Marriages
By Sam Ramsden
How The City Healed Five Years On From The Manchester Arena Attack
By Ella Glover
Plan C Vs. Plan B: What's The Difference?
By Lexi Inks
Get Even More From Bustle — Sign Up For The Newsletter