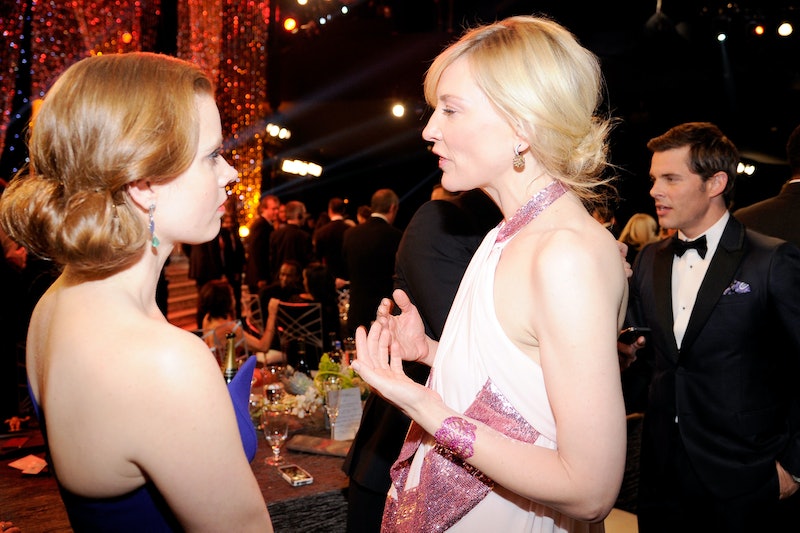 There is cool, and then there is Cate Blanchett and Amy Adams. The actresses, who have a total of nine Oscar nominations, have always come across as two of the most poised, funny, and likable women in Hollywood, and this past weekend, that title became even more fitting. In the course of two days, the two attended the Oscars, visited talk shows, and then, wait for it, Cate Blancett and Amy Adams got tattoos together (more on that later, we promise), proving once again that they're cooler than we can ever hope to be.

Here's a look back at how Blanchett and Adams spent their Oscar weekend:

Amy Adams: Was The Butt of Ellen DeGeneres' Jokes

All celebrities have to be prepared to deal with the jokes of the media, but it's a lot different when you're sitting in the front row of a live awards show seen by millions of viewers and the "media" is standing twenty feet away. Yet when Oscar host Ellen DeGeneres made Adams the butt of two jokes in her opening monologue, the nominated actress gamely laughed along, taking the host's zingers about her lack of higher education and "selfish" roles in two Best Picture nominees in stride.

Cate Blanchett: Almost Missed Oscar Category Because She Was At the Bar

If Blanchett seemed a bit rushed when she accepted her award for Best Actress, it's because she was; just a few minutes before, she had been at the bar drinking with Julia Roberts (whom she later told to "suck it"), and only ran to her seat when she remembered her category was up next.

"The blessing and the curse of this is that it happens at the arse end of the evening," Blanchett said in a post-Oscar interview. "You lose track of the fact that you're even nominated, and then you get taken by surprise... I was with Julia Roberts at the bar for rather too long, and just got back to my seat in time."

Ugh, nearly missing getting your second Oscar because you were busy getting drunk with another Oscar winner is the worst, right? Let's just pretend that we can relate.

Amy Adams: Texted Through the Oscars

Amy Adams is a five-time Oscar nominee, meaning she's sat through approximately seventeen hours of ceremony. We wouldn't blame her for needing a break every once in awhile, and so when, on Sunday night, the cameras captured her texting while sitting in the front row, we let the faux pas slide. If any actor can get away with using his/her phone while their own film was being introduced onstage, it's Adams; she's been around the block enough times to make her own rules about what's considered proper Oscar etiquette, and no one can tell her otherwise.

It was already impressive enough that Blanchett showed up on The Ellen Show Monday morning, considering that she'd likely been out celebrating her Oscar win just a few hours before. When she asked the audience if any of them would like to hold her Academy Award, then casually proceeded on with the interview, not caring that dozens of strangers were getting their hands all over her Oscar and passing it through a crowd? "Cool" took on a whole new meaning.

On Monday, Blanchett, Adams, and their significant others visited a tattoo parlor in Hollywood, because of course that's what you do the day after the Oscars. Photographers captured Blanchett and Adams' fiance, Darren Le Gallo, leaving with bandages on their arm, but whether Adams and Blanchett's husband, Andrew Upton, also got inked is unknown. Even if they were just there for moral support, the fact that the group scheduled a post-Oscars tattoo date is amazing all on its own. As for what tattoo Blanchett got, your guess is as good as ours. Perhaps it's a friendship tribute to Adams? We can only hope.