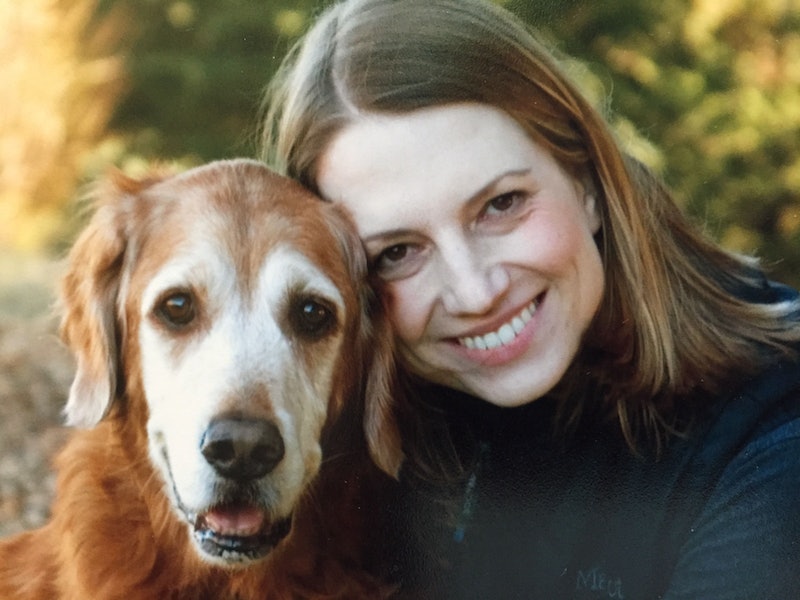 Julie Barton's memoir, Dog Medicine: How My Dog Saved Me From Myself , will be available wherever books are sold on July 19, 2016.

Two weeks after graduating from college, I moved to New York City. I’d lived in suburban Ohio my entire life, and I couldn’t wait to relocate to Manhattan. I wanted to write and be cultured, urban, and hip. But soon after moving to the city, my boyfriend left me, the job I’d found was crushingly boring, I gained twenty pounds, and not-so-nice strangers left me rushing home so I could sink into a puddle of fearful tears.

I didn’t know it then, but I was sinking into a dangerous depression.

Less than a year after moving to New York, I collapsed on the floor of my tiny kitchen on East 82nd street, not knowing what was wrong with me. My mom drove from Ohio to New York and took me home where I sank even further, ready to die. My parents sent me to a psychiatrist and a therapist and wanted me to take medication. I couldn’t imagine that those things would help—but there was one thing I thought might bring me joy: a puppy. All my life, our family dog had been my solace. Soon, on a farm in rural Ohio, I found the love-of-my-life, my savior, a dark red golden retriever puppy that I named Bunker Hill.

I’ve written a book about these rough and magical days called Dog Medicine, How My Dog Saved Me From Myself. There are countless ways Bunker helped me recover, but here are the top 11:

Dog Medicine: How My Dog Saved Me From Myself by Julie Barton, $13.60, Amazon

1. My dog didn’t care that I was severely depressed.

When I’m depressed, I’m crushingly tired, extraordinarily sensitive, self-destructive, and often mean. I had lost my friends in New York, and I was desperately trying to alienate my well-intentioned parents. I’d built a prickly wall of defense around me because I was so deeply hurting. No one wanted to be with me—until my dog. If I was tired, he napped with me. If I was sad, he sat quietly next to me. He was the very first being to pass through the prickly wall and join me in my darkness. His companionship was lifesaving.

2. He always wanted to be with me.

Depression made me push everyone away and isolate myself, because people scared me. They disappointed me. Hurt me. Told me I could trust them and then betrayed that trust. Growing up, my troubled sibling relationship left me feeling like I was truly unlikeable. But Bunker wanted to be with me all the time. In fact, when I wasn’t with him, he seemed just as upset and scared as I was. This symbiotic need quelled my isolation. We were in this together.

Every word out of anyone’s mouth struck my depressed mind as an insult. Someone could say, “Your hair looks nice today,” and I’d think, They’re saying that because my hair looked terrible yesterday, and today I’m barely presentable. Dogs don’t communicate the way we do, and this was utterly refreshing.

Bunker didn’t need me to tell him them what was wrong the way my parents and doctors did. Articulating psychological pain can be extremely difficult. But when words to describe our malaise fail, a dog doesn’t care. They just want to be with us, and that safety, ironically, helps us eventually articulate our sorrow.

When I was depressed, I sank into my parents’ couch. I never went out. I watched television, ate cereal, and slept. I fantasized about falling asleep and never waking up. The extent of my physical exertion was walking to the bathroom and back. But when I adopted the puppy, he needed to go outside, so I went too. Simply getting outside was healing. Watching him frolic in the backyard became more interesting than anything on TV.

6. He gave me confidence.

My rough year after college left me worried that I couldn’t handle adult life. But when I found Bunker, though I couldn’t do it for myself, I felt confident that I could take care of him. My dog gave me purpose. I had to train him. I read training books and learned that a dog’s mental health depends on the owner’s leadership. Dogs who think no one is in charge get enormously distressed and worry that it’s their job to be the alpha dog. If I wanted him to be happy, I had to take charge.

7. Loving him so much gave something else to obsess about.

When I wasn’t with him, I thought about him. I worried. I hoped he was okay. This may not sound like a good thing, but for me, it was. Prior to having Bunker in my life, my brutally harsh inner critic dominated my thoughts. Once Bunker came, my thoughts shifted outward, and the relief was enormous.

8. He helped me meet people.

We moved from Ohio to Seattle and I quickly learned that walking down the street with an adorable puppy is a wonderful way to see all the joy and kindness in strangers. Almost every person who approached me did so with fondness for this incredibly precious creature. Instead of going home and crying, I went home feeling seen, happy, and connected.

9. He was incredible perceptive.

My relationship with my dog was the most intimate emotional relationship I’d ever had. I will never forget the very first day I realized that Bunker really saw me. I’d had him for a few weeks and the depression was waning, but I began to worry that my recovery was only temporary. When I began to fall into the darkness, Bunker noticed. He came to me and was glued to my side the moment he sensed my sorrow. That was when I knew that with him by my side, I could recover.

It’s been said a million times because it’s true: dogs know love. Dogs love with unconditional acceptance. Dogs love with enthusiasm. They don’t hold grudges. They don’t judge. They don’t know meanness. They just revel in connection and touch. They are thrilled to see us every single time we return to the house. They are ecstatic at the sight of the leash, because it means a walk outside, connected to their very favorite person.

11. I couldn’t die because he needed me.

Before having Bunker, I often thought about suicide. When I began to recover, the thoughts lessened, but recovering from depression is not linear. It’s not a virus that passes. Even after I had my dog, I felt depressed sometimes, but I knew with certainty I would not take my own life because I had him now. He would miss me. He needed me. And that was all I needed to keep on living.

Dog Medicine: How My Dog Saved Me From Myself by Julie Barton, $13.60, Amazon

More like this
This Psychological Effect Might Be Keeping You From Hitting Your Goals
By Lexi Inks
The 19 Best Tweets & Memes About Bisexual Awareness Week
By Lexi Inks
10 Ways To Be More Empathetic To Your Partner
By Raven Ishak and Lexi Inks
Are Quality Time & Gift-Receiving Love Languages Compatible?
By Lexi Inks
Get Even More From Bustle — Sign Up For The Newsletter