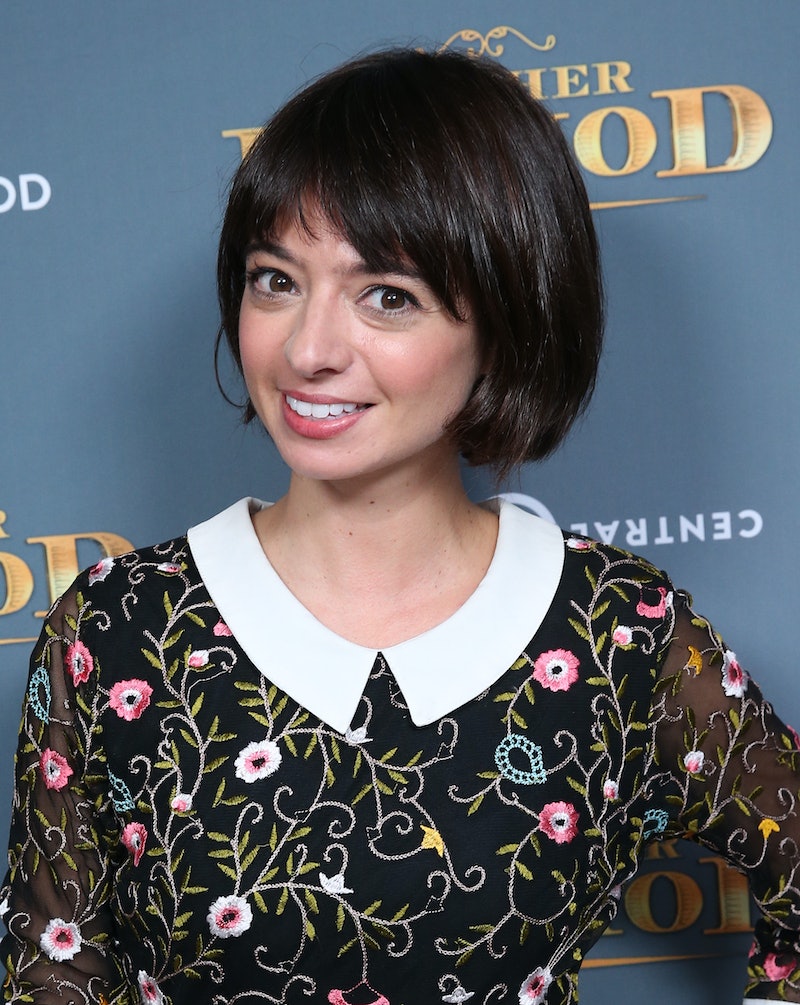 The struggle between passion and profession is at the forefront of Mike Birbiglia's new comedy Don't Think Twice. In theaters on July 22, the movie focuses on an improv troupe who must decide whether to move on from the hobby or keep pushing their comedy dreams further. When asked if she's faced a similar crossroads in her own career, Don't Think Twice star Kate Micucci says, "I feel like I’ve been really fortunate that I’ve been able to make a living at the things I love to do. But even when I wasn't making a living out of it, I was still doing it every day." She pauses and superstitiously taps her knuckles on the table before continuing, "It just has been working out."

Knocking on wood probably isn't necessary, considering that Micucci has built a name for herself through recurring roles on TV shows like The Big Bang Theory, Scrubs, and Raising Hope. But even if she hadn't become famous, the actor-slash-singer would be doing the same exact thing — following her passions. She tells Bustle,

"There’s that fear always: 'What if it doesn't work out? What if it stops? What if all of a sudden I’m not able to make a living?' I am just a person who really loves to make stuff and share it. I think I would be doing that no matter what."

Besides acting, the New Jersey native is half of the musical duo Garfunkel and Oates, along with longtime friend Riki Lindhome. The pair recently scored an Emmy nom for Outstanding Original Music and Lyrics for their song, "Frozen Lullaby." If you're unfamiliar with their hilarious work, check out the ever-relatable "Happy Birthday To My Loose Acquaintance" video ASAP. Micucci also mentioned that they'll be touring again in the near future.

And the star's résumé doesn't end there — the 36-year-old is a cartoonist, just like her character Allison in Don't Think Twice. "I’m a little different than Allison, because she’s a little more timid to share her work," Micucci says. "She’s working on her graphic novel that she just cant seem to get done. Where I’m just like, 'Look at the thing I made!'" As for her big goals IRL, she hopes that Garfunkel and Oates will create a musical one day — fingers crossed that happens.

Regardless of what she's doing professionally, though, music and humor are like second nature to Micucci. She shared one of her favorite memories from the Don't Think Twice set, where she and co-star Keegan-Michael Key spurred a cast-wide joke and made up an impromptu song called "Miles Doesn't Know His Own Butt Strength," inspired by a random cartoon they found on set with that caption. (Miles is the name of Birbiglia's character in the movie, but beyond that, the meaning is unclear.) What is clear is that Micucci had a blast with the cast — and with everything she's done career-wise.

Don't Think Twice, in particular, has a message Micucci seems incredibly proud of. "It’s really, really important to follow your heart and your dreams," she says. "I know that sounds like it should be on a bumper sticker, but don’t deny those things that are inside you that you want to share and bring them to the world." And even if plans go astray and dreams change, she adds, "It’s OK to see where the wind takes you a little bit."

For the successful Micucci, that attitude seems to be paying off just fine.

More like this
Taylor Swift's “Carolina” Theme For 'Where The Crawdads Sing' Soundtrack Is Here
By Jake Viswanath
What Is Elvis Presley’s Net Worth? How The King Earned & Spent His Fortune
By Grace Wehniainen
Photos Of The 'Elvis' Cast vs. Their IRL Counterparts Will Have You All Shook Up
By Grace Wehniainen
The Best Memes & Tweets About Lady Gaga Reportedly Joining 'The Joker' Sequel
By Grace Wehniainen
Get Even More From Bustle — Sign Up For The Newsletter