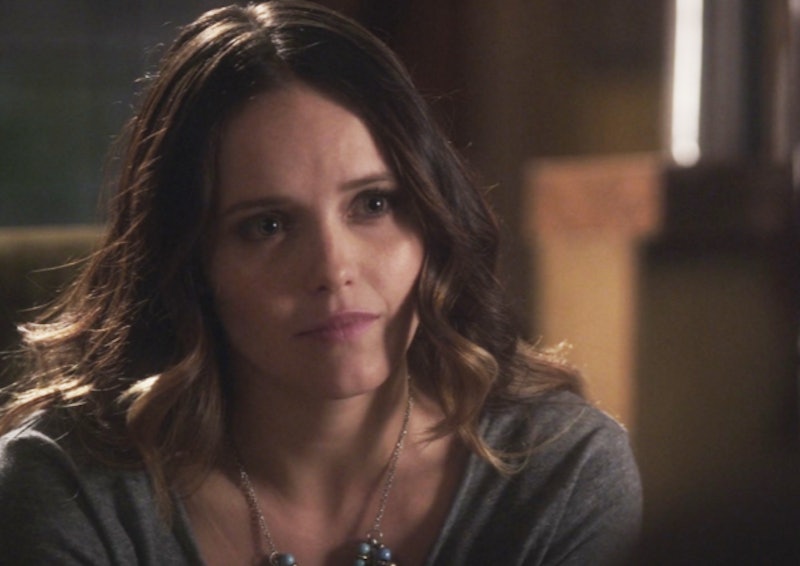 Pretty Little Liars never fails to surprise me, and the show's most recent episode (Season 7, Episode 5) was no exception. While a lot of crazy stuff was revealed, including the burner apartment that Rollins had been staying at, the super creepy Detective Wilden mask, and the return of the one and only Noel Kahn, one of the strangest things by far was that phone call from Nicole. Does this mean that Nicole could still be alive in Pretty Little Liars ? Let's recap.

Nicole was Ezra's girlfriend, who was sadly kidnapped while the pair built houses for the charity Habitat For Humanity. She'd long been presumed dead. Earlier in the episode, Ezra told Aria that he'd been to see Nicole's parents to get closure, and to tell them that he was in a new relationship (Ezria forever), which they supported. Everything seemed to be going well — until later when Ezra's phone rang and Aria decided to answer it. And who was calling? None other than missing and presumed dead Nicole, of course.

When Aria answered the phone call from Nicole, she could hear people in the background and street noise, but not Nicole specifically. Scared that the call would upset Ezra, she deleted it, but wondered if it could actually be Nicole calling after all this time. If Nicole is still alive and was phoning Ezra, what might this mean for the future of Pretty Little Liars ?

Talking to Emily after the incident, Aria tried to justify her actions: it was unlikely that Nicole was still alive, and she didn't want Ezra to be hurt now that he was in such a good place. Emily told a story about how, following her father's death, her mum got a phone call from his number. It wasn't him, but someone else who'd since taken over those digits. When it happened, however, it was shocking and strange, as it would be. While Aria and Emily thought this was the most logical explanation for the phone call Ezra received, is there any possibility that Nicole is alive?

As no one ever found a body, Nicole's kidnapping has always remained a mystery, one that even inspired Ezra's new book. Even though her loved ones have had to move on, including holding a funeral for her, Nicole's disappearance has looked as though it might never be solved. Now that she appears to have called Ezra, the case is no longer as closed as it once was. And if Nicole is still alive, will Ezra want to be with her?

As the long awaited proposal finally took place at the end of Episode 5, things have gotten even more complicated for Ezra and Aria. Surely, Aria has to tell Ezra about the phone call, and risk reigniting his hope that Nicole might still be alive. Ezria fans should probably start feeling a bit nervous about this latest development, that's for sure.