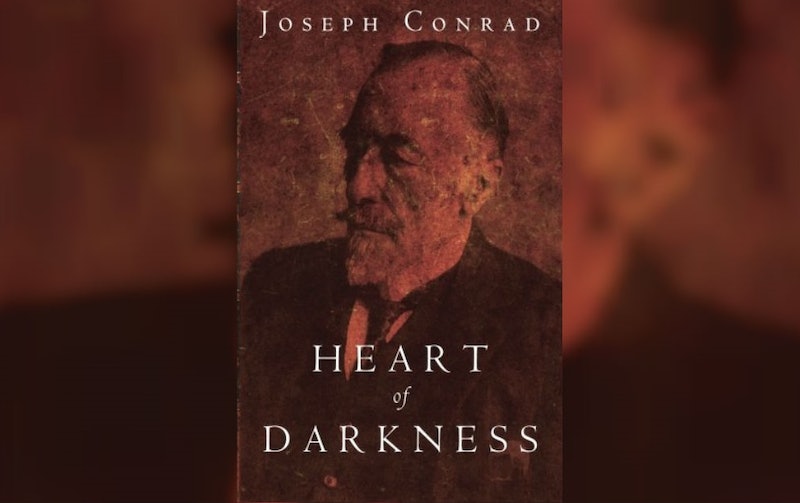 Even the most dedicated book nerds can admit that not every novel we read for high school English class was the kind we'd read on our own time if given the choice. Some of them were actually quite enjoyable (shout-out to The Great Gatsby for being timelessly awesome), and others we might not have appreciated until we grew older and reflected on them. For me, Joseph Conrad's Heart of Darkness was neither. My memories of reading this book during my senior year of high school mostly consist of contemplating all the means of physical torture that would have been more pleasant than analyzing this story. Typical high schooler reaction to a deeply layered and symbolic classic, right?

Fast forward a few years, and I'm now a grown-ass woman who pays bills and sometimes wears pants even when she's not in public. Basically, I'm pretty classy now, and I couldn't help but wonder if I'd finally become classy enough to truly appreciate Heart of Darkness as the literary masterpiece my English teacher swore it was. I was feeling pretty hopeful when I downloaded it onto my Kindle, partially because it was free, but also because as an adult, I have found that I've been able to appreciate classic stories a lot more than I was able to when I was younger. I had my fingers crossed that the same would happen when I re-read Conrad's famous novella.

"Although I understand the necessity of analyzing books in an English class, I also feel that the idea of having to do it can influence the impression that the story leaves on teenage students."

Given that I was admittedly going into this experiment a bit prejudiced, I had to make a few promises to myself. First, I vowed to read Heart of Darkness not only from the analytical viewpoint I'd been forced to take in high school, but also from the "normal person reading a normal book" viewpoint. I knew that if I had any chance of giving this book a fair shot, I had to allow myself to see it as something other than work. Although I understand the necessity of analyzing books in an English class, I also feel that the idea of having to do it can influence the impression that the story leaves on teenage students. But a book like Heart of Darkness is also the type that a reader almost has to dig deeper into if they want to get the maximum experience out of it, so I had to periodically remind myself to read critically, but not too critically.

I also had to swear to myself that I would do my best to read this story with the most open mind possible. Because I had done the bare minimum when it came to reading and studying this book in high school, I wasn't too worried about being able to read it with a fairly fresh pair of eyes. In fact, the only things I truly remembered about it were the main characters and the setting, metaphors about imperialism, ivory, and lots and lots of darkness, but I'd hated it so much at the time that it was hard to shake the dread that came with having to revisit it. Still, I did my best to convince my mind that it was looking at a new book from a new perspective.

Fulfilling both of these promises proved to be difficult at first; I fell asleep exactly four times before I'd gotten halfway through the book. When I managed to stay awake, I had to re-read just about every paragraph because my mind kept wandering. The main issue was that it took a long, long time for anything to really happen in terms of action. I'm not the kind of person who needs ninjas and fighter jets and fighting ninja jets to be entertained, but I soon figured out that I could skip entire pages of the book and not miss anything in terms of plot. However, I would have missed lots of instances of words like "black" and "darkness," not to mention plenty of sentences that stretched on way longer than they should have. In fact, the writing itself felt much like the way Mr. Kurtz was perceived by Marlow: stylistically impressive when viewed at the surface level, but seriously lacking in actual substance. The non-analytical side of me was painfully bored.

The part of me that was picking the book apart, however, was having a slightly better time. Heart of Darkness is peppered with powerful and beautiful quotes that are not only still relevant today, but would also make great typographical posts on Instagram. At one point, Marlow remarks that "The conquest of the earth, which mostly means the taking it away from those who have a different complexion or slightly flatter noses than ourselves, is not a pretty thing when you look into it that much." Conrad is obviously referring to British imperialism here, but in 2016, it's difficult not to think of a certain presidential candidate promising to "make America great again" by making it harder to access for immigrants and refugees.

Even as things started to pick up later in the book, my excitement felt relative. Much like the way a glass of ice water goes from lackluster to The Greatest Thing Ever after you've spent a few hours in the summer sun, the more intense moments in Heart of Darkness only seemed intense because I'd been deprived of any sort of entertainment for dozens of pages beforehand. It wouldn't have been quite so bad if Marlow and Mr. Kurtz had been fleshed out a bit more, but both of them ended up feeling too much like characters and not enough like people. Call me a book snob, but I like my stories to either have a strong plot base or a strong character base, and without either, this book fell flat when it tried to stand on a base of prose alone.

"I can also recognize that many of the things I dislike about the book only seemed cliche or overdone because of how often I've seen them come up in more modern literature."

Finishing Heart of Darkness for the second time in my life brought me almost as much relief as it did the first time around, though I definitely see it differently than I did when I was 17. I can almost guarantee that I'll never enjoy it, but I do have a newfound appreciation for it. Many of the larger themes of the story, including the whole "Are the savages the 'primitive' natives or the 'civilized' foreigners?" question, are still extremely relevant today... and probably will continue to be in the future. I can also recognize that many of the things I dislike about the book only seemed cliche or overdone because of how often I've seen them come up in more modern literature. Much like the way Bram Stoker's Dracula might seem unoriginal to someone who had gotten their vampire fix by reading Twilight and watching True Blood, Joseph Conrad's famous novel might only seem bland to me because of how many modern authors have also written about similar themes.

Was this re-reading the magical eye-opening experience I'd hoped it would be? Nah. My dislike for this book will probably always have a special place in my own dark heart. In fact, if I'd been reading it for pleasure rather than for an experiment, I probably would have put it down forever before I'd gotten 20 percent of the way through. But at least now, I can identify exactly what I liked and didn't like about it rather than simply dismissing it as boring. My taste in books might not have changed too much since I was in high school, but I felt a little better knowing that the education I received in that same English class helped me to dissect and appreciate books on a deeper level than "entertaining or not entertaining." Give your own least-favorite book from yesteryear another shot! You might just end up hating it a little less.