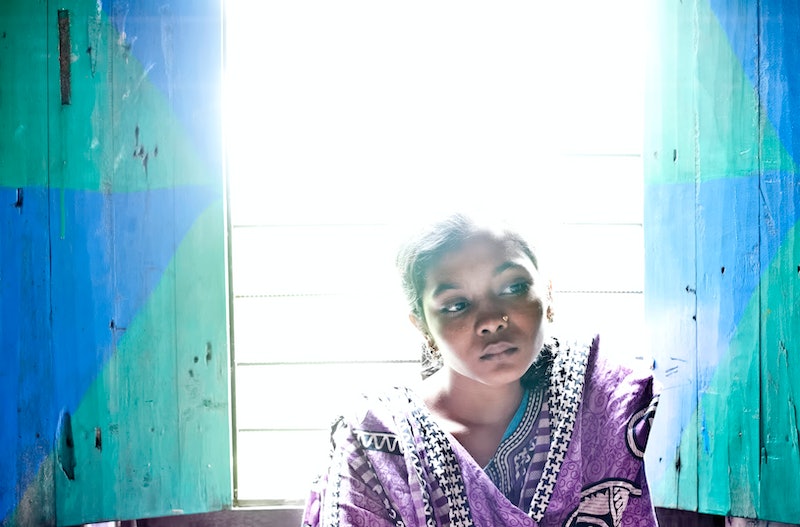 The UN Secretary General’s UNiTE to End Violence Against Women Campaign, which is managed by UN Women, has declared the 25th day of every month to be “Orange Day.” If you have no idea what the heck that means, don’t berate yourself too hard — it’s literally part of my job to write about women’s rights, but I didn’t know about Orange Day until I started researching for this article. Now that I know what Orange Day stands for, however, I’ll be observing it from now on — because it’s awesome, and we need it. In case you’re unaware, “Orange Day” is a monthly opportunity to take action to prevent the worldwide violence against women and girls.

This monthly observance is essentially an evolution of the UN’s International Day for the Elimination of Violence Against Women, which takes place every November 25. As of January 2016, however, UN Women kicked Orange Day up a notch by proclaiming that, “Orange Days will highlight specific Sustainable Development Goals as they relate to violence against women and girls.” Each month focuses on a different goal, and this month, that goal is to “reduce inequality within and among countries.”

1. 1/3 Of Women Experience Physical Or Sexual Violence In Their Lifetimes — Mostly By An Intimate Partner

UN Women reports that approximately 35 percent of women worldwide have experienced physical and/or sexual violence in their lifetimes, and more often than not, it's been at the hands of an intimate partner. (Though some national studies show that up to 70 percent of women have experienced physical and/or sexual violence from an intimate partner in their lifetimes.)

2. Marital Rape Is Illegal In Only 52 Countries And It’s Semi-Legal In Several U.S. States

According to the UN, only 52 countries have laws against marital rape, which means marital rape isn't even considered rape in more than 140 countries across the globe. In India, the issue of government-approved spousal rape is particularly tragic. In 2012, the southwestern Indian state of Karnataka ruled that denying your husband sex for no specific reason is a "form of cruelty." As The Huffington Post reported last year, India's Supreme Court passed a similar ruling two years later.

Here in the U.S. — a nation where the state of women's rights has arguably come a long way — marital rape is still semi-legal in eight states, including Ohio and Connecticut. What's worse is, even this could be considered progress; until 1993, an American man in any state could only be charged with rape if the alleged victim wasn't his wife.

3. Women With Disabilities Are Nearly Twice As Likely To Experience Intimate Partner Violence

As the American Psychological Association reports, women with disabilities are 40 percent more likely to experience intimate partner violence than able-bodied women, making them a population that is incredibly vulnerable to experiencing violence in their lifetimes.

4. Nearly Half Of The Women Who Were Killed In 2012 Were Murdered By Intimate Partners Or Family Members

UN Women reports that, of all the women who were victims of homicides in 2012, almost half were killed by intimate partners or family members. Comparatively, less than six percent of men killed in 2012 shared the same fate. Of course, this is still too high of a percentage — but it clearly shows that women are disproportionately affected by intimate partner violence, and far too often, it costs them their very lives.

5. Over 100 Million Girls Worldwide Have Experienced Forced Intercourse At Some Point In Their Lives

According to UN Women, about 120 million girls have experienced forced intercourse, or some other form of forced sexual activity, in their lifetimes — meaning around one in 10 girls alive today have been forced into non-consensual sex. This is no doubt related to the fact that more than 700 million women living today were child brides, 250 million of which were married before their fifteenth birthday, but it also has to do with the pandemic that is intimate partner violence against women and girls. As the UN states, "By far the most common perpetrators of sexual violence against girls are current or former husbands, partners or boyfriends."

6. 70 Percent Of Human Trafficking Victims Are Women Or Girls

7. Transgender Women Are Most Likely To Experience Anti-LGBT Violence

Transgender people are at greater risk of experiencing anti-LGBT violence than any other member of the LGBT community. In fact, a 2013 report from the National Coalition of Anti-Violence Programs (NCAVP) states that 72 percent of victims of anti-LGBT homicide were transgender women, and 67 percent of anti-LGBT homicide victims were trans women of color. On top of all that, in August of last year, a Fusion analysis found that 20 transgender women had been killed in 2015 in the U.S. alone.

Fortunately, the practice of female genital mutilation (FGM) was finally banned in Nigeria in May of 2015. Unfortunately, this doesn't change the fact that at least 200 million women and girls alive today have been been cut in the over 30 countries where FGM has been documented. According to new estimates published on the United Nations’ International Day of Zero Tolerance for Female Genital Mutilation in 2016, in most of these nations, the majority of these girls were cut before their fifth birthdays.

9. Nearly Half Of All Women In The U.S. And The EU Have Experienced Psychological Violence From Intimate Partner

While the stats above are discouraging and infuriating, it's important to remember that information and awareness is power. You can check out the UN's page on Orange Day for sample messages you can share on social media, and suggested Orange Day activities. We can all raise awareness, and even better, we can consider donating our money and time to making these stats less upsetting as soon as next month.

More like this
The 19 Best Tweets & Memes About Bisexual Awareness Week
By Lexi Inks
Women Around The World Are Cutting Their Hair In Solidarity With Mahsa Amini
By Darshita Goyal
Are Quality Time & Gift-Receiving Love Languages Compatible?
By Lexi Inks
The Differences Between Polyamory & Open Relationships
By Lexi Inks
Get Even More From Bustle — Sign Up For The Newsletter