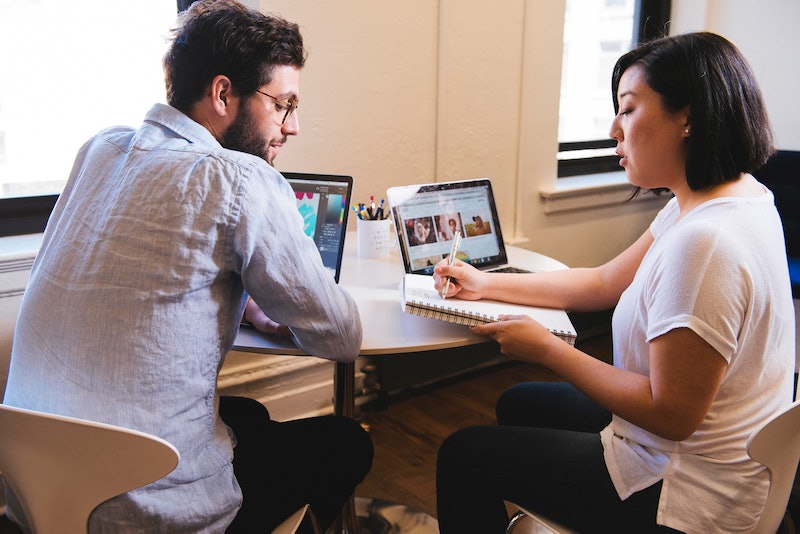 From being interrupted in meetings to receiving explanations of topics they already understand, many women have personally experienced our society's tendency to value men's opinions over their own. Developer Cathy Deng created the website Are Men Speaking Too Much? to change that. Since the first step toward such change is awareness, the site lets you see exactly how much time each person in a conversation spends talking by clicking buttons that read "a dude" and "not a dude" when people start and stop speaking. Now, mansplainers have nothing to hide behind.

Deng tells Bustle that she created the site in response to STEM diversity efforts that focused on how many members of different groups were in the room without considering how they were interacting. "I started to realize that men often aren't great at noticing when conversations are dominated by men," she says. "Women are generally more attuned to noticing these things, but they too can be biased in overestimating the participation of other women — these types of biases are just so ingrained." She herself didn't realize how male-dominated the conversations that took place in her industry were until fairly recently: She tried Are Men Speaking Too Much? out at an event that was about 50-50 and expected to find around 75 percent of the conversation dominated by men — only to realize it was actually 94 percent.

This isn't too surprising given the research that's been done on gender and speaking habits. According to a study in the Journal of Language and Social Psychology, both men and women are more likely to interrupt women than men. According to another study from Brigham Young University and Princeton, men take up 75 percent of the average meeting when there's an equal number of men and women, which reaffirms Deng's point that diversity is not just about headcount.

While men aren't usually trying to close women out of conversations, it sometimes happens in subtle ways without anyone realizing it. For example, people may be more likely to look at men for answers when they ask about topics like science or technology, and women may be less likely to speak up themselves because they tend to doubt their own abilities more, especially in male-dominated fields. That's why tools like Are Men Speaking Too Much? are so important for raising awareness awareness: It isn't enough just to not be sexist. We have to realize that we probably all do subconsciously exhibit sexism, and that we need to consciously address our biases.

While it might get cumbersome to sit there pressing buttons during every conversation you have, the site does make for an interesting and helpful occasional experiment. Ever since she recorded that event, Deng says, "People are thinking more critically about the space that they take up and ways that they are unknowingly shutting out other voices. I'd say that was 100 percent worth me sitting and pressing buttons for an hour."

The site's code is shared publicly on Github, where Deng invites people to adapt it. It could, for example, be altered to track how often people are interrupted or to address other forms of diversity if people self-report their identities. She's wary, however, about assuming something like someone's race based on their looks — and you can't always tell someone's gender by their appearance either, for that matter.

Deng also cautions against viewing the results the site produces as evidence of problems with individual behavior that have simple solutions. "I don’t want people to see this and go, 'OK, women need to talk more' or 'all men need to talk less,'" she says. Rather, we should be looking at the cultural assumptions that lead some groups to talk more or less in the first place. "Talking time is really a symptom of deeper issues relating to privilege, comfort, and norms," she says. "That’s the important stuff."

More like this
How To Fight For Reproductive Rights, Based On How Much Time You Have
By Courtney Young
Sandra Bullock, Girlboss Extraordinaire
By Matt Harkins & Viviana Olen
Lydia Leonard Is Setting The Record Straight
By Olivia-Anne Cleary
The Most Compatible Life Path Numbers, According To Numerologists
By Kristine Fellizar
Get Even More From Bustle — Sign Up For The Newsletter