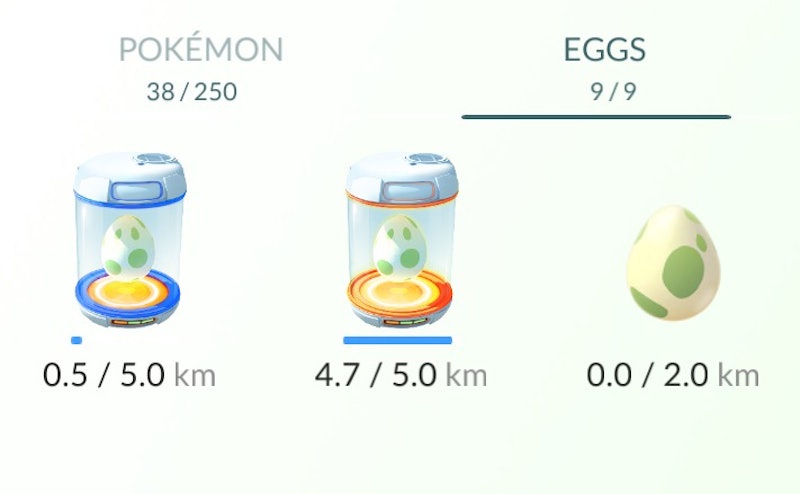 Although full-on breeding hasn’t yet been included as a feature in “Pokemon Go,” one aspect of the franchise’s classic game mechanic has had players walking up, down, and all around in order to utilize it: Egg hatching. Of course, those eggs aren’t going to hatch themselves, so if you’ve been wondering exactly how to use incubators in “Pokemon Go,” this little tutorial should have you covered. How else are you going to become a doting Pokeparent?

To be fair, "Pokemon Go" doesn’t exactly come with an instruction manual; as such, although much of it is fairly intuitive once you get the hang of it, it can all seem a little foreign when you encounter it for the first time. For example, you’ll notice when you go into your inventory screen that your incubators, while present, are also sort of faint — like they’ve been leeched of brightness. That’s because you can’t use them directly from the item screen, the same way you can’t use Pokeballs or a handful of other items directly from the item screen. So how do you use them? In one very particular way — that’s how.

But the rewards can be pretty spectacular, so it’s worth learning how the whole thing works. Who knows? If you’re diligent (and like to walk long distances), you might finally manage to get a hold of that super rare critter you’ve been dying to add to your collection. Here’s how to do it.

You can’t use an incubator if you don’t have anything to incubate. Eggs can be acquired for free from Pokestops. Note that they are not the same as Lucky Eggs; Lucky Eggs just boost the amount of XP you gather for a 30-minute period — Pokemon don't hatch out of them. Pokemon-hatching eggs are pale yellow with big, green spots.

There are a few ways to get a hold of incubators. You’ll always have at least one on hand; you’re given it along with a handful of Pokeballs when you first start playing the game, and unlike every other incubator in “Pokemon Go,” this one has unlimited uses. You’ll know it by its orange-y red trim.

You can find the other incubators, which have blue trim, in a few places: They can be acquired from Pokestops; you can get them as a reward for leveling up; and they can be purchased in the “Pokemon Go” Shop for 150 Pokecoins, or about $1.50.

While in map view, tap on the big ol’ Pokeball at the bottom of the screen.

It’s on the left hand side. It should take you to the screen that shows you all the Pokemon you currently have in your possession.

It’s at the top of the Pokemon screen. Beneath the word should be two numbers separated by a slash: The first is how many eggs you have, and the second is how many eggs you’re capable of holding. Right now, I have nine eggs, and I can’t carry anymore.

6. Tap The Egg You Want To Incubate

8. Tap The Incubator You Want To Use

After you tap “Incubation,” you’ll see a menu with all the incubators you currently have in your inventory. Note that you can’t select an incubator you’re already using right now — it’s strictly one egg at a time per incubator. You can, however, incubate more than one egg at a time, as long as you have a whole bunch of incubators on hand (one per egg).

If you’re feeling lazy, you can always give one of these techniques for hatching eggs without walking a shot. (I still think walking is the way to go, though.)

…Your egg will hatch! I hatched my very first Ponyta over the weekend, and it’s beautiful. I had no idea how much I wanted to have a flaming horse baby as a pet until now.

And that’s all there is to it! Like much of the game, using an incubator is fairly intuitive; in case you need some step-by-step instructions, though, you should be all set now. (No judgment.) Happy hatching!