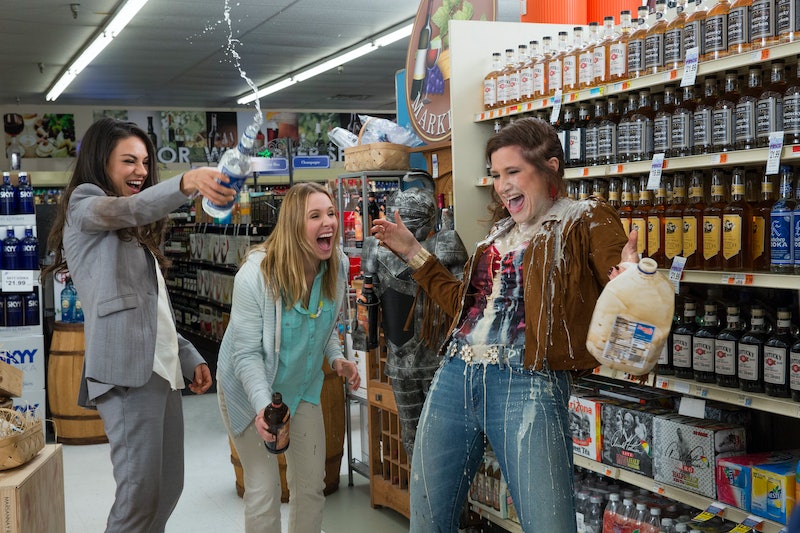 Here's the thing to know if you're planning on seeing the new movie Bad Moms: when you leave the theater, you'll be wanting to talk about those two scenes. If you've seen the film, you know which two I'm talking about, but if not, well, let me catch you up. The first scene involves (spoiler alert!) Kristen Bell, Kathryn Hahn, and an, um, phallic demonstration, and the second features Bell, Hahn, and Mila Kunis ravaging a grocery store and destroying everything in sight. While both scenes are amazing in their own ways, it's the second one — the Bad Moms grocery store scene — that's the most memorable for me, in part because of the craziness that went on behind-the-scenes to make it happen.

You see, in order to make a scene featuring three women chugging milk and downing Cheerios look as realistic as possible, the actors involved had to, well, chug (watered down) milk and down Cheerios, among other tasks. When I visited the Bad Moms New Orleans set in February, I watched the grocery store scene being filmed, and I can attest that Bell, Hahn, and Kunis went hard when it came to ravaging those aisles — so hard, in fact, that Hahn joked she had a trick about how to handle a physically challenging situation she likened to The Revenant ("Leonardo DiCaprio, nothing on us").

"Run to the restroom and vomit," the actor said in a deadpan, causing Kunis and Bell to crack up and firmly shake their heads no. Hopefully, Hahn was totally joking, and that successfully filming so many takes of the same food and drink-heavy scene came down to, in Bell's words, "choosing your props wisely." But no matter how they decided to handle it, it's clear that the three woman had a great time clowning around at the grocery store. Each take was filled with hilarious improv, with each star screaming her head off, grabbing random items of food, and — in Hahn's case, at least — planting a huge kiss on the extra playing an employee at the store. As Kunis said, "Destroying a grocery store is pretty f*cking awesome."

And as viewers of the movie can see, the stars' excitement over getting to tear down the aisles translates to one of the funniest scenes in the film.