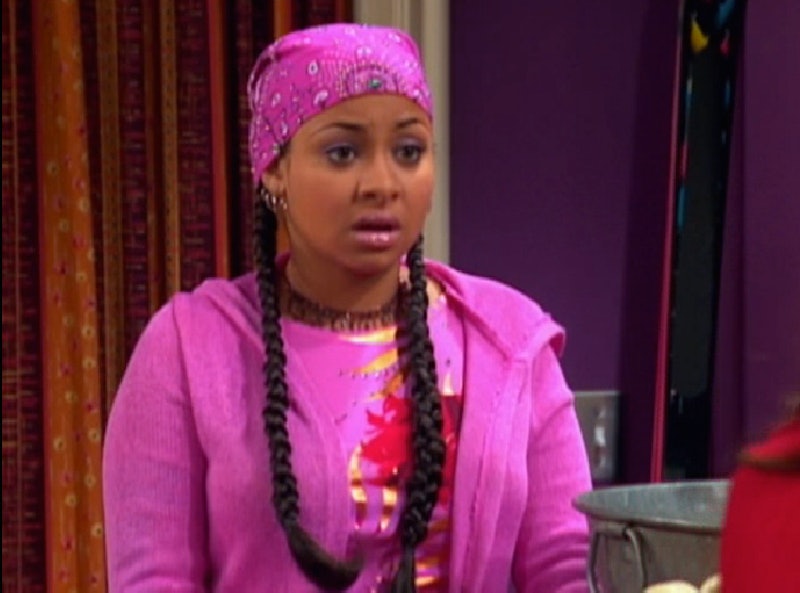 A piece of my soul died when Disney Channel's That's So Raven ended. I remember everything about my favorite show from my formative years, from Raven's famous "ya lil nasty" punchline to her high-pitched squeal of a laugh. My fondest memories, however, are all of That's So Raven 's best hair moments.

Raven Baxter gave us plenty of reasons to want to be her. She had the best gang of friends backing her up, she made her own style, and she was psychic for crying out loud (although her supernatural abilities usually caused her more trouble than they were worth).

But it was all of her crazy hairdos that made me the most envious. No one switched their style up quite like Ray. She could go from bone-straight locks to a head full of beautiful braids all in one episode, and slay every look in between. Seriously, there wasn't a style out there that didn't work for this psychic fashionista.

I could spend hours dissecting all of the incredible That's So Raven style witnessed on the show. So let's just start with Ray's hair before getting swept away by the nostalgia. And let's cry, because we'll never see her pointy toe heeled boots or embellished denim again. These 13 good hair days prove that Raven had one of the best manes around.

Now that the double buns trend is back from the '90s, Raven's hair is still on point. She once rocked mini buns á la Gwen Stefani and put her own spin on things by wearing micro braids. I'm also loving the fact that her micros were spiral-curled.

Although Raven gave her ponytail a spiking, she proved she could make any early aught hair trend look good. Besides, only the spunkiest of babes could truly pull off spiky hair and we know that Raven never came up short in that department.

OK, so her pouf was nowhere near as sky-high as Snooki's old 'do. Ray's was totally wearable without making her look like she was headed straight for the Jersey Shore. Maybe Snooki should have followed her lead.

We're always harping on Lizzie McGuire's hair as though she was the only one who could pull off crimped strands. Don't get me wrong: She was the definitive queen of early 2000s hair. But Raven gave her a run for her money! She once broke out the crimps and butterfly clips, and looked fab. This was probably her best hairstyle yet. By the way, that fluffy feather pen was as Cher Horowitz as it got, and I'm still loving it.

Just when I thought Ray's hairstyles couldn't get any better, she outdid herself with a braided bun. She was known for her braids, after all.

6. Anytime She Had Tendrils

Any hairstyle that featured tendrils was always a winner. Who didn't love a pair of '90s tendrils to frame the face? We all did it and luckily we had Raven to show us how it was done time and time again.

Anytime I wore twists during my childhood, I got my hairspiration from Raven. Thanks girl!

Ray looked gorgeous with her effortless waves and bedazzled headband. Honestly, you could never go wrong with bedazzled anything during the early 2000s. Raven must have understood that the blingier, the better, considering her shirt was just as embellished.

Long before Kim Kardashian made braided pigtails a thing, Raven was doing the style justice. Her double French braids made for the perfect 'do to imitate as kids: Practical, but still chic.

I loved all of Raven's funky hairstyles because they were so unique. But episodes in which she wore bone straight hair were my favorite. Maybe it was because my mom never wanted to me to fully straighten my hair as a kid. Whether or not I loved Raven's sleek mane because it was like forbidden fruit to me, it remains one of her best hair moments in my eyes.

Like I said, Raven was known for slaying braids on the regular. Her micros were Beyoncé-in-her-Destiny's-Child-days worthy.

Raven gave her bun life when she complemented it with a dramatic side-swept bang. I'm also a fan of her makeup here. And is that a fuzzy choker I spy? OK, seriously! It does not get more '90s than that.

Remember when hair bumps were a thing? You can thank Lauren Conrad for that. Raven also slayed the bump and you better believe I followed in her footsteps during my tweendom. It was always a struggle to get the bump perfectly smooth with the right amount of volume.

If it weren't for Raven's influence, we would have had some pretty dull hair. She definitely rocked some of the best locks we saw during our childhoods, and they all remain glorious today.

More like this
5 Mini Skirt Outfits To Wear, Inspired By These Brave Souls
By Avery Matera
David Schwimmer Doesn't Remember This Classic 'Friends' Episode
By Sam Ramsden
All The Early 2000s Hairstyles Rihanna Wore In A$AP Rocky's "D.M.B." Video
By Olivia Rose Ferreiro
‘90s Streetwear Brands That Are Making A Major Comeback
By Dominique Norman
Get Even More From Bustle — Sign Up For The Newsletter