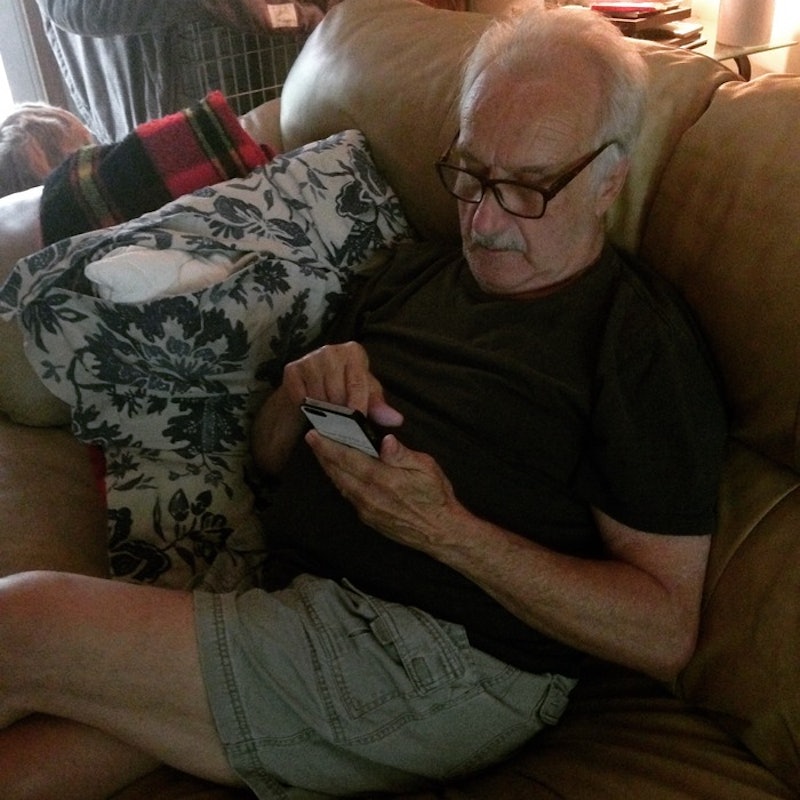 Despite some reservations, I recently joined Tinder. I was in Spain, didn’t know many people, and figured I could meet someone interesting. Which I did. And let me just tell you, he’s adorable AF, likes post rock, and is awesome in bed. But then I left Spain to come back to the States. So, here’s to hoping our paths will cross again, because whoa, nelly.

Since my subleter is still in New York apartment and I’m in between trips, I’m currently at my parents’ house in New Hampshire. And while my interest in Tinder has dwindled and I have zero desire to meet someone in New Hampshire (although it’s a beautiful place!), I thought I’d sign on again for a week or so and put my dad in charge of my Tinder account. Why? Because like me, my father is outspoken, sarcastic, and tells it like it is. I also knew that after the last few people I’ve dated (and married), he might want some say in a potential new suitor.

However, unlike myself, my father standards are less complicated. His requirements? "Must have a dog, love the Red Sox, and enjoy a couple cold ones... preferably Sam Adams because we have stock in them." I think this is where I should point out that my father, born and raised in Boston, and having lived in southern New Hampshire for about 30 years now, is as New England as one can get… hence his specific requirements.

Here’s how it all went down.

Trying to explain Tinder to my father wasn’t easy. Since I told him he was in charge of choosing the guys and I gave him full control over messaging any matches, he assumed that meant he had to go on dates with these guys, too. It took me almost 30 minutes to explain the premise, the point, and the article that was to come from the experiment.

Still somewhat confused as to why Tinder even exists in the first place, let alone his role in it, he got to swiping.

1. When He Saw New York In A Picture

"I bet this assh*le chants 'USA USA USA' in his sleep. We're north of the Mason Dixon. Someone should tell him that."

4. When He Almost Gave Up

After laughing for a good 10 minutes: “What an assh*le. This is f*cking stupid.” (Side note: Both my father and I swear A LOT, in case you haven't picked up on that already.)

5. When He Thought He Found A Good Match

"This guy seems funny. I can see you posing for a photo like that."

Actually I would never pose for a photo like that, but whatever Dad.

"He's a Spanish teacher! Maybe he can give you a few free lessons before you go back to Spain... Oh, never mind. He's got a bunch of kids. But he says they're amazing!"

This was followed by an eye roll, as he mumbled that his own kids were more amazing, as it's clearly a competition.

Yet, he still swiped right.

8. He Took My Interests Into Consideration

"This guy looks like he likes a couple of cold ones. You like to drink. But I bet you can drink this guy under the table, because look at that tie."

True; I do like to drink (a bit too much, to be honest) and I probably could drink this guy under the table because, according to my dad, he has an ugly tie.

9. He Found What He Was Looking For

"Mandy! Look at where he is! We've got a Red Sox fan and a blue star!"

At this point, I had to explain the Tinder Super Like thing to my dad who, once again, called Tinder "stupid."

Needless to say, I didn't have too many matches. But the matches I did have, Dad had a blast messaging.

His Messages With The Matches:

"He likes the Sox! Do you think he's a season ticket holder? I would support that union for the tickets."

As to why my father told him my apartment is being renovated, he couldn't say. In his words, "I was just going with the flow." Also, my father is already a season ticket holder, so I'm not sure why it would matter if this guy was, too.

"What an assh*le. Let's delete him. He probably feels sh*tty because he gave his poor dog a stupid name."

Dad admitted that the chances of me finding love in New Hampshire via Tinder weren't very good. Not because of the caliber of guys in NH, but simply because I'm not just on a different page as most of them, but in an entirely different book. The majority of the guys had kids, 9-5 jobs, and many had never left the country. While that's fine for some, that's not what I'm looking for. And, finally, Dad could see that.

But, despite it all, he still thinks meeting the Spanish teacher for free Spanish lessons isn't a bad idea and that finding a Red Sox fan should be at the top of my list of requirements in a man. I haven't dated a single sports fan in my life, let alone a Red Sox fan. But, according to Dad, that's at least better than dating a Yankees' fan.