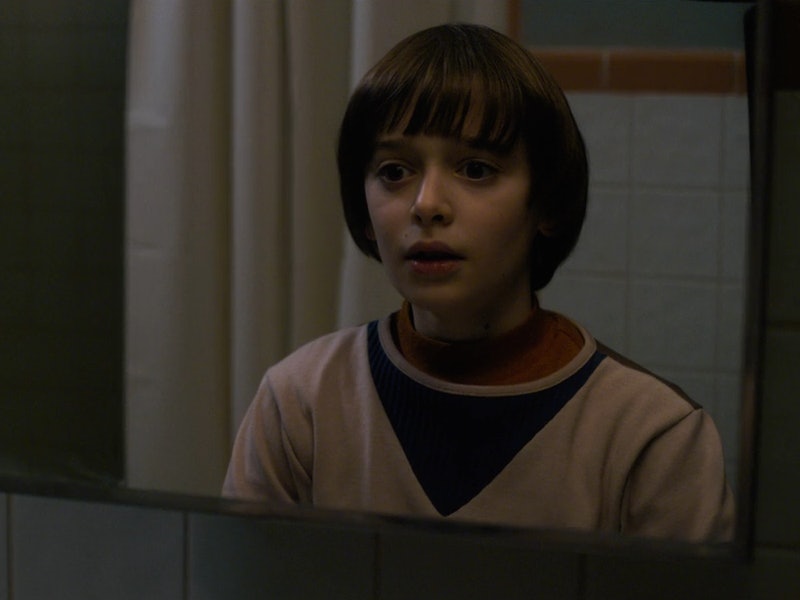 Spoilers for Stranger Things Season 1 follow. The premise of Stranger Things is that young Will Byers went mysteriously missing on his way home from his friend's house. And while there was a happy ending with Will being found, Will was not OK in the finale of Stranger Things. After a rousing game of Dungeons and Dragons at Mike's house, Will was targeted by the monster from the Upside Down and disappeared for a week much to the distress of his mom — Winona Ryder's character Joyce. Thanks to Joyce and Will's friends being unrelenting in their search for Will, they were able to save him from the disturbing Upside Down with the help of Eleven and Chief Jim Hopper. The Netflix series jumped ahead a month in the last moments of Season 1 and Will appeared to be fully recovered from his horrific incident, but he was keeping a massive secret from his family and friends that could have major repercussions in Stranger Things Season 2.

While seated for a Christmas dinner with his family, Will excused himself to go wash his hands, but what he really was doing was going into the bathroom to cough up a slug-like being. He also suffered visions of his time in the Upside Down with a quick flash of the dark parallel world, so not only is he emotionally scarred from his experience, but he has been physically changed. Although Stranger Things hasn't been renewed for Season 2 yet, there's no way that Will coughing up a slug from the Upside Down world into his sink isn't going to have a massive impact on his family, friends, and the town of Hawkins as a whole if the series returns.

To figure out what is happening to Will, you have to look at his time in the Upside Down. Now, Will could have been chosen by the monster and survived by sheer chance — or there could be another reason. Depending on the intelligence level of the monster, it could have been keeping Will alive for a specific purpose. And that specific purpose I am proposing is some form of procreation.

Will survived a real-life nightmare by being trapped in a cocoon-like nest presumably built by the Demogorgon. Although he could move around in the Upside Down, when his mom and Chief Hopper found him, he had a monster that looked like a snake or eel attached to his face and down his throat. Hopper pulled the snake/eel thing off of Will and out of his throat and shot it to death, but what if that being had somehow laid eggs into Will? Then the slug-like thing he coughed up could be an infant version of the main monster that died or some other being from the Upside Down.

Maybe the Demogorgon monster needed a human host to incubate its eggs — or perhaps it reproduces in a total non-Earth-like animal way that will be woven into Stranger Things' mythology come Season 2. If reproduction was its goal, then the monster could have been snatching humans with that in mind and not everyone survives the encounter — like Barb. If that's the case, then it would help back up theories that Will is somehow special. But regardless of Will's abilities or how these slugs are being produced, if they are the spawn of the monster, this is not good news for Will.

However, it's not just bad news for Will, who has already gone through so much in his young life, it's also bad news for Hawkins and perhaps, even beyond. I have a feeling from his reaction that the slug he coughed up during Christmas was not the first one. If he's keeping this a secret from his mom and continually spitting them out into the bathroom sink, that means that multiple baby monsters are now in the pipes and sewers of Hawkins — alive. And considering their native land is the Upside Down, I have a feeling they could really thrive in sewage pipes.

If Will has been coughing up these slugs on the DL for a month, well then, Hawkins is going to have a mighty big problem on its hands. And also, poor Will! I can't even imagine how terrible coughing up a live being would be. Now, Will could not be Will at all and instead be the monster disguised as Will, but I emotionally can't handle that theory right now after seeing how much joy Will's return brought to his family and friends. So when Season 2 happens (because it's gonna happen), Will better be himself and come clean to his mom about what's been happening to his body. And more importantly, El better be alive in those woods, because Will — and Hawkins — is going to desperately need her help once again.