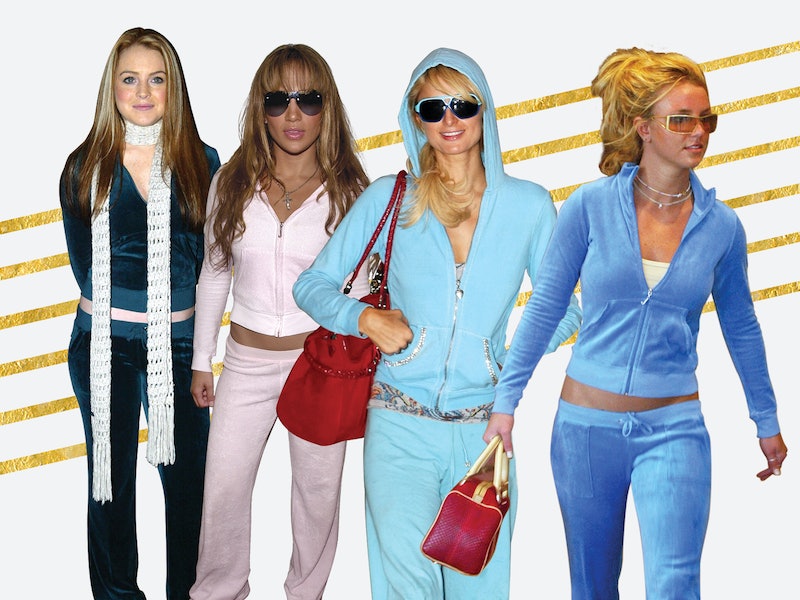 Track is back. Juicy Couture is making certain of it. Thanks to a '90s trend resurgence, those velour tracksuits you, all your cool friends, and Jessica Simpson wore practically every day in the early 2000s have a 2016 capsule collection launching in Bloomingdale's. And people are freakin' stoked (like, actually, unironically stoked) to slide their legs and arms back into those velvety pieces. The enthusiasm is so high, it may only be a matter of time before everyone is wearing tiered ruffle skirts and neckties as belts again too.

It sure seemed like the Juicy Couture tracksuit was retired for good around the same time everyone started caring more about Emma Watson than Paris Hilton. JC will forever be a beloved brand, but when even the founders said they'd probably never wear a pink tracksuit again, the glory days when Britney Spears was handing them out at her wedding were almost certainly in the past. So how did the Juicy Jumpsuit go from a must-have fashion item in 2001 to a Ben Affleck punchline in 2004 to a highly anticipated launch in 2016? The fashion gods are fickle, and it looks like the tides are turning back in Juicy's favor.

To understand how Juicy Couture made tracksuits great again in 2016, we should backtrack to the brand's first surge of popularity. Juicy founders Pamela Skaist-Levy and Angela Nash (now Nash-Taylor), met in 1988, then launched a maternity line with just $200. They then shifted their focus to tee shirts, which naturally led to loungewear. Juicy Couture was founded in 1997; the classic tracksuit was launched in 2001.

As Lauren Sherman reported for Business Of Fashion, this timing could not have been more impeccable for the brand. Juicy Couture's launch coincided with the celebrity-heavy weekly magazine boom. "Suddenly, celebrities were being photographed more frequently off the red carpet than on it: during coffee runs, at the dog park, off-loading groceries into their SUV," Sherman writes. And a lot of them were doing all those things normal people do while rocking those uber-comfortable, uber-stylish, uber-covered-in-sequin-logo Juicy Couture tracksuits.

This was also the age when everyone wanted to be seen wearing the same cool brands as everyone else. While today's teenagers prefer clothes without any logos that would give away the fact that they all shop at the same stores, those of us who went to school in the first decade of the 2000s know how important it was to have an American Eagle on our polos, an Abercrombie Moose on our denim skirts, and a Juicy J on our tracksuit zippers. Wearing the same cool brands as celebrities was particularly important, and Juicy Couture came in at a price point that made that possible for many of us normals.

The tracksuits were a status symbol, but they were more accessible than a monogrammed designer bag or shoes with red soles. At around $200 for both pieces, they certainly weren't Wet Seal cheap, but saving your allowance up to buy one or getting a set at a Bat Mitzvah wasn't totally unthinkable. And so we wore them like crazy.

In 2003, Skaist-Levy and Nash-Taylor sold their company to Liz Claiborne (now Fifth & Pacific) for $53.1 million but, as Huffington Post notes, they remained in charge of the brand. Lauren Sherman reports that Juicy Couture's net sales were up to $493.8 million in 2007. Then, the recession happened and, coupled with tracksuit fatigue, JC saw dips in revenue just like basically everyone else. By 2010, the founders left their roles at the brand, citing creative differences between themselves and Bill McComb, who was CEO of Liz Claiborne at the time. Juicy continued to see lower and lower profits every year, and many argued that the fact that their tracksuit stayed exactly the same for an entire decade could have had a big part in the brand's temporary downfall.

Fifth & Pacific finally sold the brand to its current parent company, Authentic Brand Group, in 2013. That November, Kohl's announced they would sell a line of Juicy clothing for less than we'd been used to paying. About seven months later, ABG decided to close all the Juicy Couture stores in the U.S., focusing instead on licensing the brand's name oversees.

To outsiders, it seemed like a cry of defeat. Turns out, the people at ABG actually had a plan. "We knew that Juicy needed a little bit of TLC," Nick Woodhouse, President & Chief Marketing Officer of Authentic Brands Group, tells Bustle over the phone. "So we gave it the TLC and protected it and nurtured it and watered it to bring it back to where it is today." Since Juicy was losing money in the U.S. but not internationally, it made sense to focus on where things were going well for a while.

While Juicy was laying low for a couple years, Bloomingdale's was looking for a splashy way to expand their athleisure category. Brooke Jaffee, Women's Fashion Director at Bloomingdale's, tells me the department store approached Juicy about doing a capsule collection. "We're seeing this incredible excitement from the customer in the category of athleisure," Jaffee tells Bustle. People want to be wearing sweatpants to work, to drinks, and pretty much everywhere again, which means timing is ripe for a JC tracksuit comeback. In addition, "one of the key fabrications for [Fall 2016] was actually velvet," Jaffee says. "We kept talking about this fusion of functional pieces with elevated fabrications, whether it was something like a silk bomber jacket or a velvet bomber jacket."

The Bloomingdale's team realized the casual version of velvet is velour, and suddenly it was not bringing back the Juicy Couture tracksuit that made no sense. Brands like Lululemon, Adidas, Puma, and Nike were already making leggings and running shoes acceptable attire even if you weren't headed to the gym. While Beyoncé and Topshop collaborated to launch Ivy Park, other brands tapped Kanye West, Rihanna, Kylie Jenner, and other celebrities as ambassadors and co-designers who would solidify workout gear's legitimacy as a new street style staple.

Companies like Tory Burch Sport also helped pioneer this trend, Cassandra Napoli, Assistant Editor of Digital Media & Marketing at fashion trend forecasting agency WGSN tells Bustle over email. "These activewear counterparts to the traditional ready-to-wear business cater exclusively to the active-seeking on-the-go consumer," she says. Even Vogue declared that wearing leggings as pants is OK — as long as you follow a couple rules, of course. And, although Skaist-Levy and Nash-Taylor declined to comment for this piece, a rep did note that the pair's current brand, Pam & Gela, is launching a new tracksuit for Fall 2016 as well.

Perhaps the most interesting part of this whole resurgence is that the tracksuit still hasn't changed all that much, and yet people are excited about them all over again. Judging by Twitter's reaction when the Bloomingdale's capsule first dropped in the middle of the summer, people are stoked for the comeback of their beloved loungewear. There were few negative responses in the bunch.

"It's a very, very similar tracksuit," Woodhouse says when asked about the differences between the first iteration and the 2016 capsule for Bloomingdale's. Jaffee confirms that although they are making a fitted ankle version, in a nod to the current popularity of joggers, the classic flowing wide leg tracksuit is still available too. And yes, she says, the zipper is still a J. The only thing missing is the infamous JUICY logo across the buttcheeks of the pants — "There's still bling on some of the suits, but it's a little less blingy," Woodhouse explains. That particular trend may best be left in 2004.

The return of the jumpsuit could be the final, velour-coated push we need to move from the current '90s hype to an embrace of the sartorial stylings of the early aughts. ELLE declared that the long, bell-shaped sleeves Britney Spears so loved wearing during her original heyday are back for Fall 2016, InStyle lists North Face-style fleece popovers as an excellent layering piece, and Vogue notes that one shoulder tops not unlike the ones you probably wore to high school dances are back in again. Plus don't forget that UGG boots — the Juicy Couture tracksuit's original OTP — seem to be having a good time too, recently signing stylish celebrities like Chrissy Teigen for their ads.

What may be changing is how consumers are buying and wearing the suits. While full-on-tracksuit was the way to go in the early aughts, now people may prefer working the separates into their existing wardrobes. The print #TRACKISBACK campaign features influencers styling either the pants or the jacket with other fall trends, and Jaffee tells me Bloomingdale's has seen the most success, saleswise, with the pants — both the classic flare and the new jogger style. She notes that "even in Aventura, Florida" Pitch Black is selling best of all the available colorways, probably because it's harder to find something in your closet that goes with a Baby Pink hoodie. Searching #trackisback on Instagram mostly yields photos from the Bloomingdale's campaigns and various #TBTs, so it remains to be seen exactly how the masses will style their new JJs.

Jaffee notes that, rather than a full-on 2000s comeback, it's likely more about consumers recognizing the best, most functional trends from past decades and bringing them back to be a wardrobe staple. "I used to do interviews about skinny jeans [as a trend], and now skinny jeans are a wardrobe basic. I think having this fashion sweatsuit or these fashionable, off-duty moments are now part of everyone's wardrobe too," she says. Marshal Cohen, chief industry analyst at The NDP Group, Inc, a global marketing and trends research company, echoed that statement in an interview with Forbes , saying, "[Athleisure] is no longer a trend — it is now a lifestyle that is too comfortable, for consumers of all ages, for it to go away anytime soon.”

Napoli says that Morgan Stanley projects that the athleisure market will see $83 billion in sales by 2020. "There has been a clear lifestyle shift, and such a large investment would likely not be made if the aesthetic were just a trend, without intentions of sticking around," she says. As further proof of it's staying power, the word athleisure was added to the dictionary in 2015.

In other words, the Juicy Couture tracksuit isn't just back for 2016; it's back for good. So whether you're layering the sweatshirt under a denim jacket, pairing the track pants with Rihanna's latest Puma creeper, or going full out with head to toe velour, one things for sure: Track is back with a vengeance.

More like this
How To Get Your Hands On The Pat McGrath X Supreme Nail Kit
By Justine Knight
Prefer Alcohol-Free Perfumes? Water-Based Fragrances Are On The Rise
By Audrey Noble
15 Chrome Nail Polish Colors For An Easy, Mirror-Like Manicure
By Audrey Noble
The Beauty Industry Disrupter From Dallas
By Jordi Lippe-McGraw
Get Even More From Bustle — Sign Up For The Newsletter