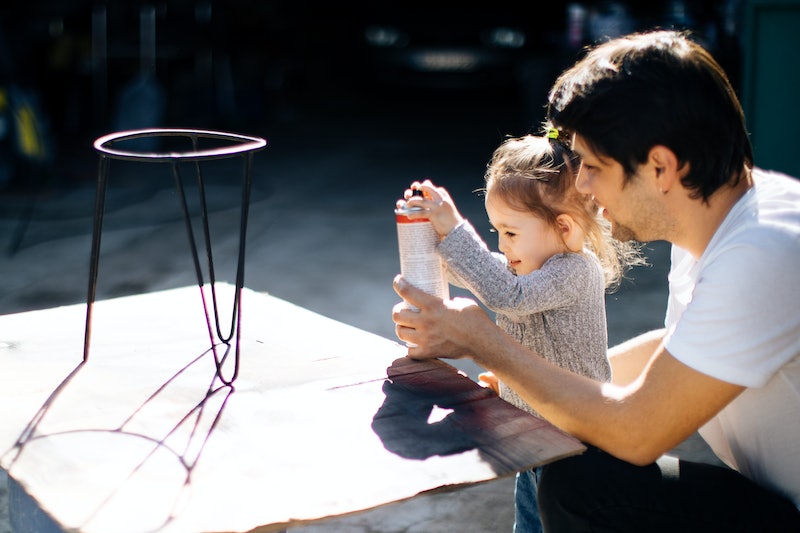 It's a sad statement on society, but some types of sexism are so ubiquitous that the line between things that are appropriate to say and things that are not has become blurred. Or, let's be real, are nonexistent. Case in point? Sexist comments about parenting — or perhaps more accurately, comments about parenting that don't seem sexist, but definitely, definitely are. There's just something about choosing to bring children into this world (or actively choosing not to) that makes people feel like they can say just about anything to you. Conversations surrounding parenting tend to make people lose their filter and, unfortunately, the unfiltered comments that inevitably ensure often skew sexist.

While it's true that women have made remarkable strides where our reproductive rights and choices are concerned, the reality is that parenting-related gender norms are deeply ingrained in our societal fabric. Subsequently, the kind of sexist remarks parents typically get fall somewhere on the spectrum between microaggressions and coded compliments — the things people say under the misguided belief they are doing you a solid by paying you a perceived compliment, when in actuality, they are propagating belief systems that set up an unfair and unrealistic parenting imbalance between mothers and fathers.

For example, the following comments about parenting may not seem sexist, but they are. They reflect long-held attitudes toward the different roles men and women have in the upbringing of children, many of which are antiquated and counter-productive to equality.

I'm not saying this comment is never doled out about mothers, but in my experience, it's typically reserved for dads — and it's even worse when the word "babysitting" is involved. I can't tell you how many times I've heard this when I go out for a rare ladies' night with my best friends and someone asks where my two children are. When I reply they are with their dad, I invariably always get a response along the lines of, "Well, that was nice of him." Uh, for what? Spending quality time with the children he helped me create? He isn't their babysitter; he's their father. Meanwhile, women (and stay-at-home dads, too!) are rarely "thanked" for taking care of their own children. Despite the fact that my husband most certainly doesn't buy into this babysitter-dad logic, we hear it every. Single. Time my kids aren't with me.

Granted, this could be construed as a compliment, and by all means, take it that way if you'd like. I'm all for anything that makes someone feel good about themselves or empowered in their own skin. The problem is that this isn't a comment men ever hear. True, cisgender men don't physically birth children in the same way; however, we don't stop hearing this comment right after we give birth. My friend April hears it all the time — and of her three kids, the youngest is, like, 8. This perpetuates the unhealthy attitude society has toward women's bodies. The implication is that we don't want to look like we have had a baby, which is a damn shame — women's post-baby bodies are glorious, stretch marks and all.

Do I think mothers are nurturing? Absolutely. However, it sure does take the wind out of a father's sails to hear this. Again, these kinds of comments reinforce the "mother as the caretaker, father as the provider" paradigm that simply isn't always the case in today's society, and for a wide variety of reasons at that. This comment is often doled out in response to a crying child wanting their mom or as an explanation for why moms should be the ones to tend to scrapes and stay home with sick kids. But this kind of logic could understandably create a defeatist attitude in dads and lead to a self-fulfilling prophecy. If people keep insisting mothers are more nurturing, there's the danger dads will believe it and leave nurturing their kids up to the moms. Furthermore, it completely erases LGBTQ parents.

For all you ladies out there who choose not to have children, you likely hear this. A lot. The issue here is the forced gender norm — just because history tells us it is a woman's job to make babies doesn't mean history is right. I mean, hello, we all know mistakes have been made with our country's past (and present, for that matter) rhetoric about women's bodies. This comment treats a woman's choice not to have children as a problem that needs solving when, in reality, it's a responsible decision and one that is deeply personal. Not to mention, when was the last time you heard someone say this to a man?

More like this
25 Quotes About Love To Share During Pride Month 2022
By Madeleine Aggeler and Emma Garza
What The History Of Pride Month Means For Celebrations Today
By Jay Polish
Meet The Spice Company Founder Who Sees Chai As A Metaphor
By Madhuri Sathish-Van Atta
Is TikTok’s “Villain Era” Trend Just An Excuse For Bad Behaviour?
By Chanté Joseph
Get Even More From Bustle — Sign Up For The Newsletter