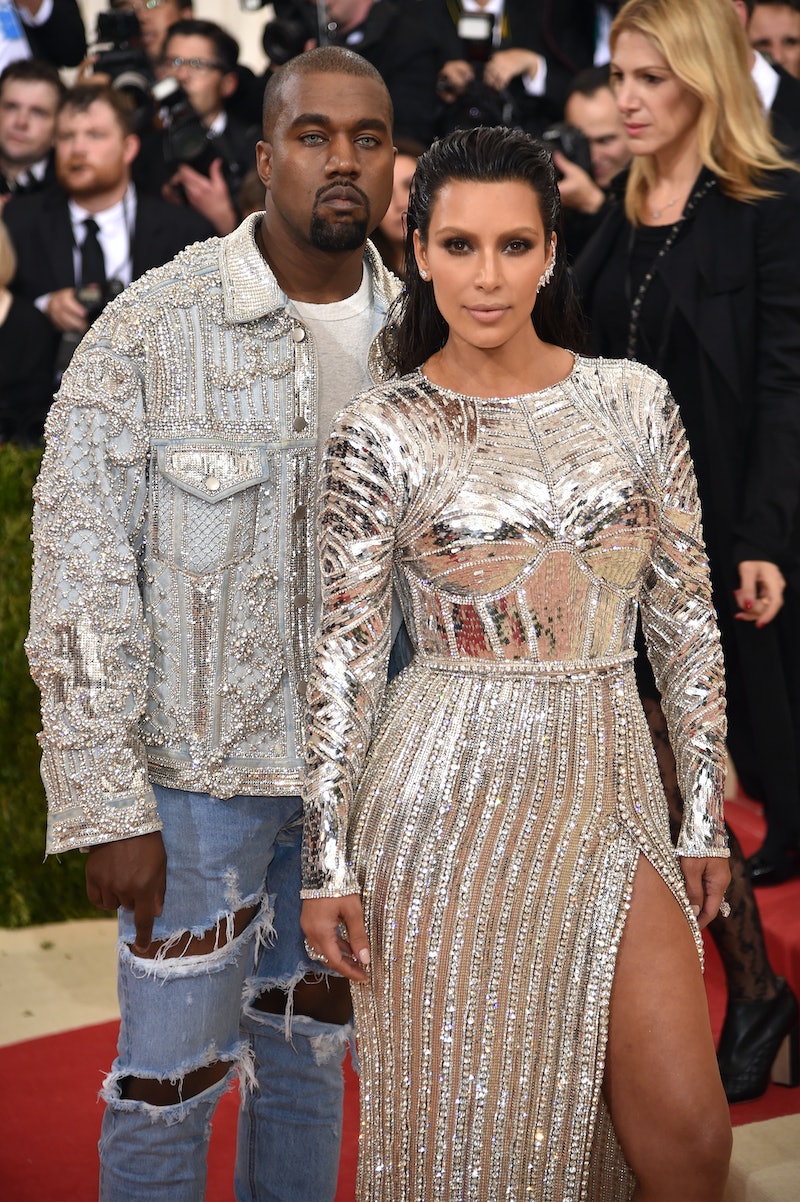 Celebrity marriages aren't always built to last, but when Kim Kardashian and Kanye West got married in 2014, I knew they would stay together forever. Why? They're each other's perfect match. And I never realized it until now, but I'm pretty sure that's because they're basically the same person. This week, Harper's Bazaar released a new profile of West and Kardashian, and in the interview, they talk about nude selfies, fashion, and their careers — pretty much everything you'd expect out of a story like this. But the more I read it, the more I realized that Kardashian is just the female version of West. And maybe, that's even what attracted them to each other.

Of course, they're not exactly alike. From what I can tell about West — which is obviously limited by what he and Kardashian allow us to see on social media and Keeping Up With The Kardashians — he's not quite as affected by what the media and strangers say about him as his wife is. And Kardashian definitely has qualities that West lacks, since many of her moves seem more calculated than when West goes off the cuff in a Twitter rant that appears totally unplanned. But there's definitely enough evidence there to show that if West was a woman, he would totally be Kardashian, and I stand by this theory 100 percent.

Here's every time in this Harper's Bazaar profile that West and Kardashian showed they're the same person. Seriously, it's freaky.

During the interview, West brought up his best selling Yeezys — you know, the shoes that are impossible to get because they sell out too fast. He said he sold 40,000 shoes in two minutes, but Kardashian quickly corrected him that it was only one minute. If West ever fails to brag about his own talents enough, don't worry — Kardashian is right there behind him to pick up the slack. Not that this is a bad thing; It's awesome that she recognizes her husband's accomplishments and is just as proud of them as he is.

When She Revealed She Tweets Without Regret

In the interview, Kardashian said, "I don't regret any tweets. I'm not a tweeter and deleter. So I have no regrets." Um, is it just me or could West totally have said this himself? He's known for going off on Twitter, and he always seems to be proud of the message he's sending. No deleting here!

When She Explained She Goes Big For Birthdays

When asked about things they've bought for each other, Kardashian replied that she rented an island for West's birthday. An entire island?! What a Kanye West thing to do. He's pretty big on birthdays and holidays, too, and always makes sure he outdoes himself. I mean, have you seen his Mother's Day gifts?

Kardashian said that, despite everything she's famous for, what she really wants to be known for is what how great she is at business. She told Harper's Bazaar, "I'd like to be remembered as someone who was smart in business, works hard, and can be sexy and a mom. A powerful but still sexy, nonconforming woman."

And being that West has created an empire for himself, and a pretty impressive one at that, Kardashian's answer immediately made me think of him. They both have a lot to be proud of, and Kardashian is as every bit as amazing at handling her career as West is.

When She Admitted To Her Vanity

West and Kardashian both admitted they're vain, although about different things. Not only do they both love themselves, but they're both open about that love. Again, totally not a bad thing — but it's definitely just another way they're alike.

If you were ever concerned this world couldn't handle two Kanye Wests, don't worry — it's already happened, and we're doing just fine. May these two keep living happily ever after. Love them or hate them, you can't deny they're perfect for each other!