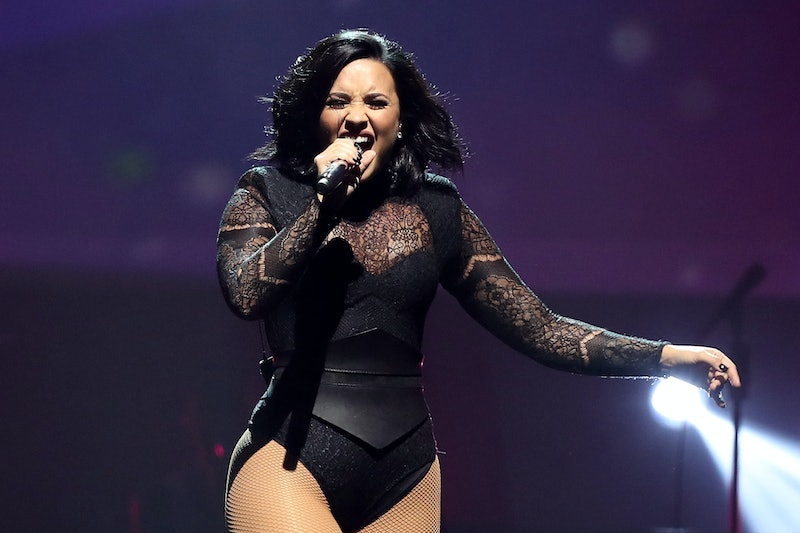 Demi Lovato has been busy. Her most recent big event was performing and speaking about mental health at the Democratic National Convention in support of Hillary Clinton. But she made waves earlier this summer, in June, when she announced that she was leaving Twitter and Instagram, because she couldn't deal with the negativity from people leaving comments. But she didn't leave Snapchat, which she said she loved because she "didn't have to deal with what some of y'all say." Even though she came back to Twitter and Instagram just 24 hours later, tweeting that she was "back b*tches, and more honest than ever," it's clear that Snapchat is her social media platform of choice. If you're not already following her, Lovato's Snapchat name is @ddlovato, and on her account she shares updates on her inspiring workouts, her hair, beauty products, messages about feeling confident, and of course, she plays around with Snapchat's fun filters.

Lovato's Snapchat account is definitely her most personal, offering a real look into her everyday life. Her Twitter and Instagram have become mostly promotional, probably to minimize all the trolls in the comments, but her Snapchat is fun and lighthearted. And she's pretty hilarious. She loves the puppy filter like everyone else. She also recently tried out the new Bratz doll filter, and she looks just like a girl with a passion for fashion.

Lovato also uses Snapchat for what social media was made for: sharing pictures of pets. Her puppy, Batman, is freakishly precious. Luckily, the singer doesn't keep him to herself. Some of Lovato's cutest snaps are from when she attended and performed at the White House state dinner in May, and even though it was a huge honor at a prestigious event, her snaps are just about as giddy and fun as any 23-year-old's would be were they invited to the White House.

Her Instagrams of the event were much more profesh, like the one of her with President Obama and First Lady Michelle Obama. You should still follow Lovato on Twitter and Instagram, but if you're a real Lovatic, add her on Snapchat, too.

Who doesn't want to see the puppy filter on their favorite celebrities?