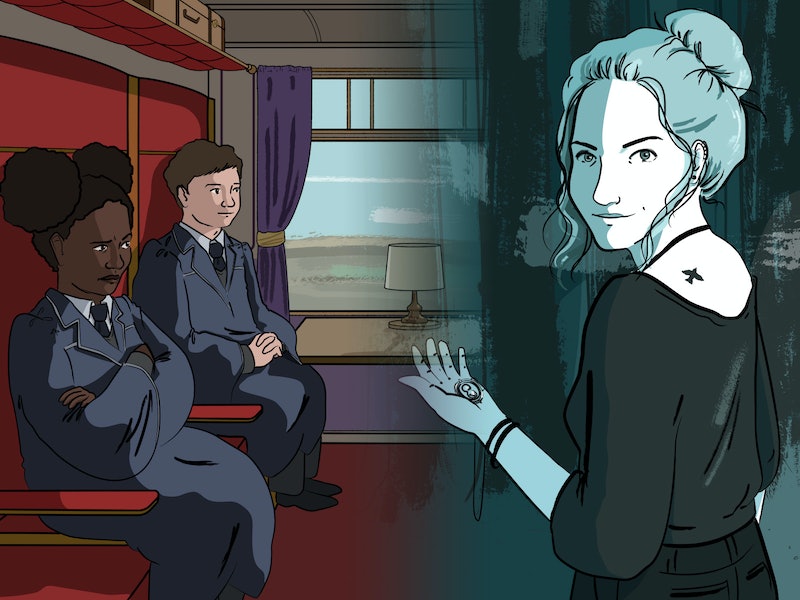 If you're a Potterhead with a lot of feelings this weekend, you are far from alone — and what better way to express all those feels than with fan art for Harry Potter and the Cursed Child ? The truth is, most of us are far, far away from seeing the live version of this show, and until we either sell a vital organ or win the Friday Forty lottery to get tickets, we need some sustenance to hold us over. Thankfully, these masterpieces of our new heroes brought to life by illustrator Allison Gore are the perfect way to do it.

While we have the production photos of Harry Potter and the Cursed Child to give us some limited scope of just what this show will entail, for the sake of not releasing spoilers, we also missed out on a lot of scenes. Fortunately, fan art exists for this very reason — to fill those holes in your imagination and bring the characters to life. We picked a few scenes from The Cursed Child from the beginning, middle, and end that viewers didn't get to see in the production photos, so brace yourselves for the best kind of magic we Muggles can make.

Albus, Scorpius, And Rose Meet On The Hogwarts Express

Right from the beginning we learn that Rose is an adorable little social climber, and a well-informed one at that. It's this scene, when Albus and Rose bust into Scorpius's compartment, that sets the tone for the rest of the play. Rather than all three of them bonding the way a lot of fans expected, this was the first moment that Albus and Scorpius defined themselves as distinctly "other," and a pivotal moment in their friendship. It's also when we learn for the first time that Scorpius is #DorkGoals, and basically the sweet summer child we need to protect at all costs.

Delphi Steals The Time Turner From Albus And Scorpius

Listen, Imma let you finish, but Delphi Riddle was the most nefarious villain of all time. She tricked the socks off of our poor heroes Albus and Scorpius, and then seemingly on purpose flashed her Augurey tattoo — which we all know bears huge significance to her as a character, enough so that she was called "The Augurey" in an alternate timeline where she and Voldemort ruled with iron, merciless fists. This right here depicts the moment that she knows that she has overpowered the boys and is going to get what the wants, in the split second before she decides to reveal what her master plan has been all along.

Like, I still have so many questions? Why is The Boy Who Lived also The Boy Who Is Mortally Afraid Of Pigeons? I live in New York, which is basically ruled by infinite pigeon overlords, and even I'm not this much of a baby. I mean, really, is this the dude we're trusting to head up magical law enforcement?? Heck, maybe I'll apply.

Here's to hoping we can see all of this magic come to life on the stage sometime soon — but in the meantime, at least we have awesome fan art to fill the nerdy holes in our heart. Check out more of Allison Gore's work at her website here.