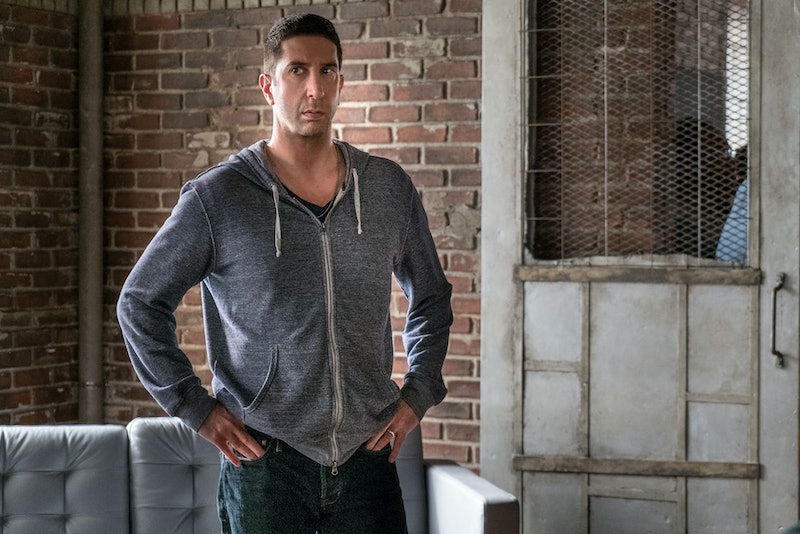 It's been a great year to be David Schwimmer. First he turned in a surprisingly sympathetic performance as Robert Kardashian in FX's acclaimed series The People v. O.J. Simpson: American Crime Story, and then he got his own starring vehicle in AMC's Feed The Beast , a combination of food porn and mob drama, as alcoholic sommelier Tommy Moran. Since American Crime Story is an anthology series, we already know that Schwimmer won't be returning for Season 2 — at least not as Robert Kardashian. (It's possible he'll show up in a totally different role in the second season, which will reportedly focus on Hurricane Katrina.) But will he return for another round of food-themed shenanigans on AMC? Will Feed The Beast be renewed for Season 2?

Ironically, one of his two 2016 shows was much more successful for Schwimmer… and it wasn't he one he starred in. The People v. O.J. Simpson won critical raves and an impressive 22 Emmy nominations, including one in the Supporting Actor category for Schwimmer himself — the actor's second Emmy nod after earning one for the first season of Friends two decades ago.

That's a high bar to measure up to, for sure; but even by any objective standards, Feed The Beast faltered. It flopped with critics, garnering a paltry 23 percent on RottenTomatoes (which the consensus praises for the show's "visual appeal," but also bemoans for its "predictable plotting, convoluted dialogue, and unlikable characters"); its ratings are anemic (although the premiere pulled in just under a million viewers, the season has bottomed out at a mere 299,000); and, although it just missed the cutoff for Emmy consideration this year, it's safe to say Feed The Beast will be a distant memory by the time award season comes around again in 2017.

Critical acclaim and awards attention can help save a show that's on the bubble (think ABC's anthology series American Crime), but ultimately any show's future comes down to its ratings — and that's what will likely spell doom for Feed The Beast. The freshman drama is currently the lowest-rated scripted drama on AMC, even coming in behind such similar low-profile shows as Halt And Catch Fire, Humans, Into The Badlands, and TURN: Washington's Spies.

Of course, a rising tide lifts all boats… and in the case of AMC, The Walking Dead is undoubtedly the rising tide. Over 14 million people watched the Season 6 finale of the network's zombie drama, and the season averaged a whopping 9.6 rating to once again emerge as the highest-rated program on all of television — yes, even ahead of Sunday Night Football and Game Of Thrones. With those staggering numbers, AMC has a certain amount of leeway in producing and renewing low-rated shows.

But there has to be a line somewhere. And with Feed The Beast being AMC's lowest-rated scripted series — and also the sole existing scripted series on the network that hasn't already been renewed for another season — it wouldn't be a shock to see it get the axe in order for AMC to pave the way for any new shows it might have coming for the 2016-'17 season.

If there's one glimmer of hope for Feed The Beast, it's the fact that people seem to be catching up with the show even if they're not watching it live. The show's audience increases drastically when you consider its L+7 ratings, which account for all the people who watch an episode on DVR or On Demand or streaming platforms within one week of its original airing. In fact, during the most recent week with L+7 ratings information available, Feed The Beast boasted the third-highest increase across all of cable at 123 percent (behind only Cinemax's Outcast and Lifetime's UnREAL), growing its audience from 374,000 to 835,000.

Will that be enough to save Feed The Beast? Or will Schwimmer's show join Rubicon and fellow mob drama Low Winter Sun in the ignoble ranks of one-and-done AMC programs? We'll have to wait for official word from the network to find out, but hopefully this Tuesday's Season 1 finale, "Fire," will prove to be a satisfying conclusion to the story… just in case.