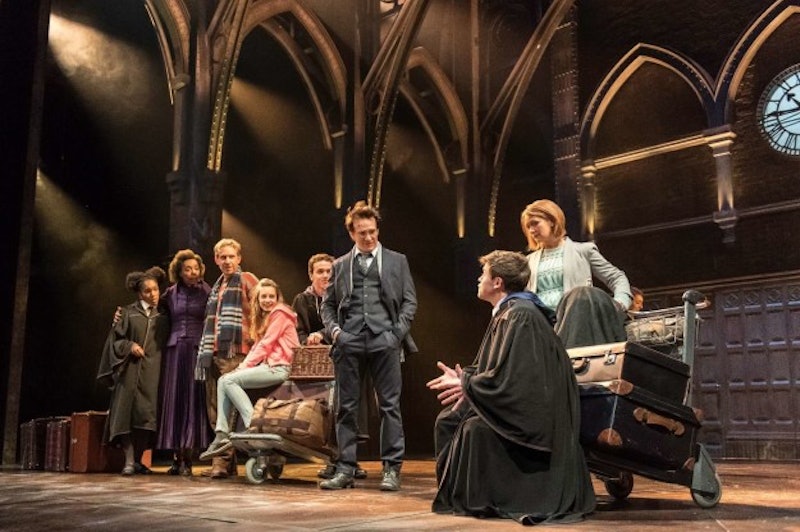 We were all so busy reeling from the emotional aftermath of the ~eighth Harry Potter book~ that it isn't until now that most of us started wondering: where is Teddy Lupin in Harry Potter and the Cursed Child ? (Warning: Spoilers ahead!) While the son of Nymphadora Tonks and Remus Lupin (and godson to none other than Harry Potter) was featured briefly in the epilogue flirting with Victoire Weasley, he was noticeably absent from the recreation of that scene in the opening of the play, and never came back into the narrative.

And yes, it totally makes sense that Teddy wouldn't be included in the story, which primarily focuses on his much younger god-cousins (?). But oh, my sad fangirl heart wanted so badly to see Teddy Lupin, all grown up with Tonks' sass and that Remus glint in his color-changing eyes. Alas, it was not meant to be — but at least we can use this opportunity to do what we do best, and basically fan fic a life for him based on the bare bones facts we do know. So if you're a human who missed seeing punk cinnamon roll Teddy Lupin in Cursed Child, buckle up! Here's what Teddy was probably up to, based on what we know about him.

By the time the play begins, Teddy is 19 years old (for anyone keeping track, approximately the same age as Delphi). He is one year out of Hogwarts, and dating Victoire Weasley, the daughter of Fleur Delacour and Bill Weasley. Sourcing stories from Pottermore, it is likely that the two of them have been dating for at least three years, as the play opens in 2017 and they were seen flirting up a storm at a Quidditch match in 2014 (thanks, Rita Skeeter). Like his mother, he was sorted into Hufflepuff House — and unlike either of his parents, he served as Head Boy.

Fun fact: Teddy is actually a cousin of Scorpius and Sirius, thanks to all that handy pureblood inbreeding. He's related to pretty much the entire Black and Malfoy family through Tonks's mother, Andromeda Black, who was the sister of Draco Malfoy's mother. Cursed Child doesn't seem to imply any ~family reunions~ on that front, but it is kind of remarkable to note that Draco is technically more related to Teddy than Harry, his godfather.

So what exactly is Teddy up to while his god-cousin and actual cousin are mucking up the time-space-magic continuum? I personally imagine that taking after his Metamorphagus and Hufflepuff mother, Teddy would be inclined to try to train as an Auror. After all, he's got a godfather willing to show him all the ropes. Seeing as he's Head Boy, he likely has a temperament more similar to his father's (who, let's get honest, deserved to be Head Boy way more than James Potter did — but that's an injustice for another day). I imagine that in the buddy-Auror movie of his life, he's the straight-laced one who keeps his reckless partner outta trouble and makes wry, sarcastic remarks the whole way.

As it takes several years to train as an Auror, that's what I bet our friend Teddy was up to during Cursed Child. And since four years passed during the play, he and his bae Victoire will have been dating for at least seven years — undoubtedly she would have proposed to him by then. If only because I really, really want to imagine Harry yelling up the stairs to his kids, "Get dressed, your cousins are getting married and we're going to be late!"