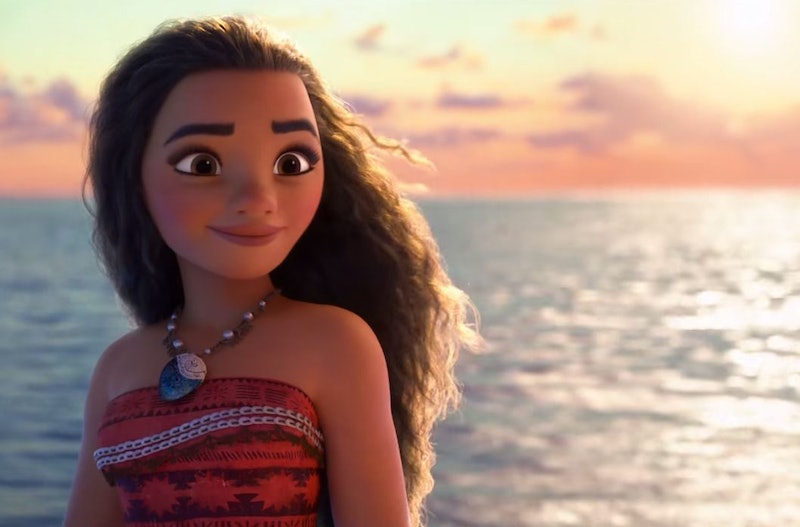 Moana is one of the most highly anticipated Disney movies in years — at least for me. The number of Disney princesses of color in the company's line-up can still be counted on one hand, and I never shy away from the opportunity to idolize another one, whether she's specifically black or not. Add to that, the report that Moana will not have a love interest in her film, which seemed at first, like another reason to be excited for the movie. However, the more I thought about it, the more I saw a downside to the same lack of love interest for Moana. While I'll reserve full judgement until I see how the film handles Moana's story, it has to be noted that when it comes to character of color, having a love life is something of a luxury in mainstream media.

As Hollywood struggles to create depth and complexity in its characters of color instead of relying on the same stereotypical tropes, there are often some missteps and some outright failures. It's a sad but true fact that characters of color are often rendered sexless and undesirable in films and TV shows, especially when compared to their white counterparts. In a Buzzfeed article aptly titled "Why Is Onscreen Romance So Rarely On The Cards For Black Women?" writer Bim Adewunmi wrote:

When it comes to mainstream movies (of which I am a huge fan), I am always doing an involuntary audit for black women — how many of us are there? In what capacity? Do we make it to the end? ...Because a lot of the time we are not there at all, and then when we are present, we are often – as in the rest of popular culture – rendered sexless, hypercapable (at the expense of all other facets of humanity), and deemed unworthy of greater character development and resolution.

The problem is one that is unique to the POC community; as we fight for women who are more well-rounded characters than simply being eye candy or love interests, there's another fight that black women are fighting to even be recognized as legitimate love interests at all. And it's worse when you consider it doesn't just happen to black women. For every Cookie Lyon from Empire and Michaela Pratt from How To Get Away With Murder, there are dozens of women of color in film and movies whose romantic arcs are either undervalued compared to those of white women or never materialize at all, as if having a romance would distract from their role as background decoration.

Take, for example, Areida from 2004's Ella Enchanted; she had no other role in a fairy tale romance movie than that of Ella's Best Friend. While Ella was overcoming adversity and falling in love, Areida was being used as a plot device to show how hard Ella's curse made her life (people could command Ella to stop hanging out with her closest friend, Areida). Then there are characters like Lily in the 2006 film The Devil Wears Prada , who seemingly has a life outside of her white friends' circle in that we know she works in the art world. Still, Lily also never has the opportunity to be desired and instead seems to exist only to further her white friend Andy's storyline in a negative way. And even being a main character doesn't make women of color safe, because they could end up like Bonnie Bennett on The CW's The Vampire Diaries: While white characters Elena and Caroline move from love triangle to love triangle, always the focus of multiple men's attentions, Bonnie's love life is given much less focus and her relationships, when she has them, often end quickly or badly.

Moana sets itself apart from those films by existing in the Disney animated canon, where the movie is an outlier in an otherwise formulaic universe: girl meets boy, girl and boy fall in love, girl and boy ride off into the sunset. Beforehand, the girl and the boy didn't even need to have more than half a conversation before getting married (Snow White, Sleeping Beauty, The Little Mermaid). But, as times change, so too has Disney, so much so that we've had a series of films — Brave (Pixar created, Disney-distributed), Tangled, Frozen — in which the heroine had no love interest or, if she did, it was the start of a relationship, not the start of a marriage, that the audience got to see.

In light of that, it's revolutionary and progressive that Moana should choose to set itself apart as the first Disney princess film to not give that princess a love interest. It's revolutionary and progressive that Moana should state from the start that the woman in question will not have her journey defined or seemingly enhanced by the promise of a man by the end of it.

But it's also a very careful line that Disney has to walk. Moana is the first princess of Polynesian descent in Disney canon, which means she has the hopes and dreams of so many children from that culture resting on her shoulders. It's important that the movie endeavors to teach those children that they can have a full life even without a romantic partner in it, and not that they can't be strong, fierce, interesting, and loved romantically at the same time. Those are both lessons that can be taken from the same fact that Moana won't have a love interest in her film, after all, depending on how it's handled.

One film that struck that balance perfectly was Lilo and Stitch. Taking place in Hawaii and starring a cast of Hawaiian characters (and an alien), Lilo and Stitch showed us the young Lilo being raised by her older sister Nani. Throughout the film, Nani was pursued romantically by David, a surfer who was completely enamored with her. However, for Nani, her troubled little sister came first, and she was too busy, and often too stressed, to give David a second glance. It was only when Lilo was happy, and when Nani was happy, that she opened herself up to the idea of a relationship with him — making him no promises, but also not closing herself off completely to the idea.

In that way, Lilo and Stitch made it clear that Nani could do it all and have it all, but that she didn't need love in her life until she was already satisfied with that life. She didn't need a man to rescue her from her problems, and having a man didn't make her any less of a strong, independent woman.

And that's what I want from Moana. The world is already leaning forward and paying attention to the fact that she is a princess of color, and that she is a princess without a love interest. (The first of her kind, considering that Elsa of Frozen was a queen not a princess, and Merida of Brave had multiple love interests that she simply wasn't interested in.) If Disney can reward our attention and our interest with a story that doesn't treat the 16-year-old Moana as an undesirable being to potential age-appropriate romantic partners — a story that makes her neither an exotic siren or a sexless spiritual healer, two things Pacific Islanders are commonly portrayed as in media — then Moana could be the most progressive Disney film that it has ever been our pleasure to witness.