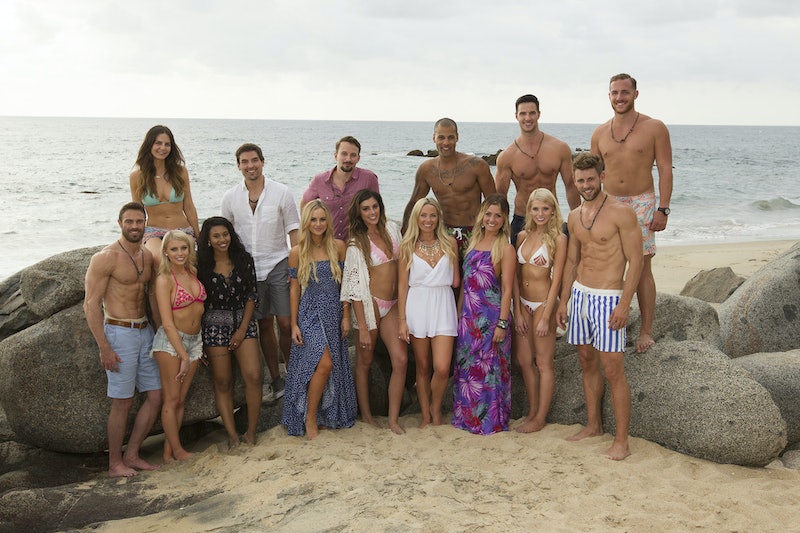 After JoJo's emotional and tear-filled season of The Bachelorette, it's time for some levity. Enter: Bachelor in Paradise, everyone's favorite summertime activity. The show gathers contestants from previous seasons — a conflation of the most dramatic, irreverent, likable, and unlikable contestants — and sends them to Mexico for the purpose of a "second chance at love." (Which I come to take as "a second chance at love for Lace," because she really, really deserves one.) "Almost paradise, we're knocking on heaven's doooooor," the intro episode to Season 3 began, and by the time they showed the second contestant — Jared, who still seems too sweet and innocent to be subjected to any of this debauchery — I knew I could say with more certainty than ever, Bachelor in Paradise Season 3 is going to be the best season yet.

Episode one got off to a rocky start with The Chad making both his entrance and volatile exit, like some sort of hurricane bounded by the confines of his own masculinity. But, now that he's gone, BiP Season 3 has room to be more incredible than ever before. To plagiarize a phrase taken directly from the Queen (Lace) herself, "On a scale of 1 to 9… I’m 9 excited right now." Bachelor in Paradise, you strange little show. Thank you for existing.

He came, he saw, he most certainly did not conquer. The Chad did nothing but personally disappoint all of us by having no remorse for his incorrigible actions, and participating in — as Carly said — "abusive and weird behavior that shouldn’t be happening." Hate to see him go, but no yes, love to see him go. Bye Chad!

2. The Show Has Hit Its Stride

You know what they say about 3 times. Bachelor in Paradise rests in that wonderful space between self-awareness and parody of itself. If it could just stay here forever, that would be great.

We've missed you so much, princess.

4. More Jared Looking Terrified Of What To Do With Ashley I. Crying

How does he keep ending up here? Someone please help Jared before he receives another 300 page (front and back!) letter.

According to Chad's scathing take down of Harrison during his exit strategy, he claimed that Harrison drinks Mimosas at night, and that my friends, is an incredible piece of information that I will think about before I lay my head down to rest every evening.

The quiet star of the show. I hope Jorge gets paid the big bucks to fill up Harrison's night mimosas.

The quiet star of my life.

8. No Joe Or Samantha

No offense, but I didn't come here to watch Samantha participate in another heist.

10. All The Other People We Barely Know

I don't remember Izzy, but that doesn't mean she can't make great TV. I also don't really remember Vinny (I do remember his mom from "The Men Tell All" though, where is she?). And there are so many others on the way. I can't wait to not remember them, and then be forced to never forget them.

11. This Twist: Twins Are A Package Deal In Eliminations

Because ABC refuses to treat Emily and Haley Ferguson as individual peoples, if one twin gets sent home, the other has to leave. Genius.

12. There Will Be Multiple Engagements

Let us not forget that at the end of June, BiP creator Mike Fleiss promised that Season 3 will result in "multiple engagements!!!" (his use of exclamation marks, not mine, though I do agree with them.) You know what's better than one engagement (looking at you Seasons 1 and 2), multiple.

How could we ask for more? I swear that I could see forever in your eyes... Paaaradise!