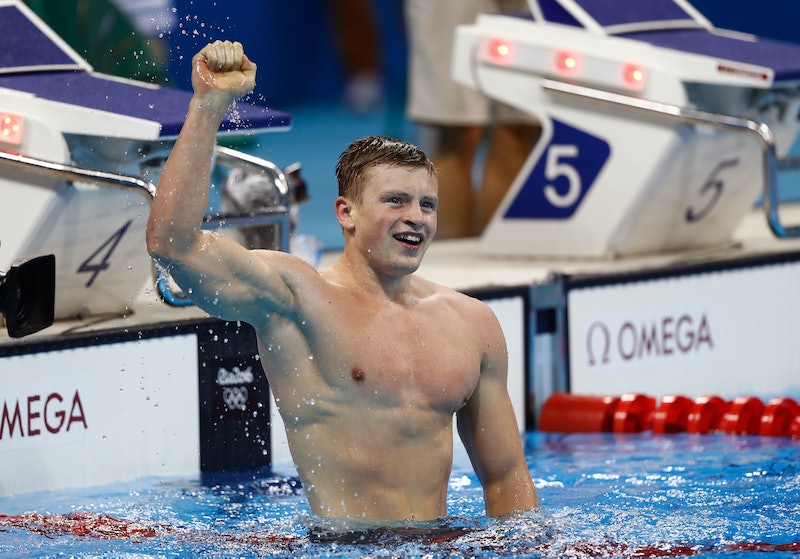 During every Olympics, it's inevitable that new stars in the sports world will be born and gain tons of fans along the way. On Aug. 7, British swimmer Adam Peaty broke a world record in the 100m breaststroke, and easily won a gold medal for Great Britain. The 21-year-old swimmer was overcome with emotion, and his dashing good looks and sweet personality made him a shoo-in as an Olympian who will steal hearts around the world. I know he was supported by his parents at the event, but I naturally couldn't help but wonder: Is Adam Peaty single?

It's only a logical next step in my curiosity. Peaty is about to be everywhere and if he's dating anyone, that person will also be thrown into the spotlight, so we should get to know them, right? Well, sorry to break everyone's hearts, but Peaty has a girlfriend, Anna Zair, who was on hand at the Olympics Aquatics Stadium to give her record-breaking boyfriend a huge congratulatory hug and kiss for all to see. In fact, Zair is not shy about showing off her boyfriend, and on her Instagram, she's already shared an exciting moment and message for Peaty. She is a proud girlfriend and can you blame her?

19-year-old Zair was in Rio de Janeiro with Peaty's parents to cheer him on and it's pretty clear that she is close to the family. According to the Daily Mail, Peaty met Zair through the City of Derby Swimming Club (where he trains), about 18 months ago. Zair's mother, Maria, spoke to the publication, and said that Zair used to be a competitive swimmer herself, but gave it up to focus on her studies. She said,

"She helps him by being there and talking about anything and everything but not swimming! It gives him a welcoming release from all the pressure... We are all delighted for Adam, it is a remarkable achievement."

The cute couple has already had a few red carpet moments, and Zair accompanied her swimmer boyfriend to the BBC Sports Personality of the Year Awards in December 2015:

After his record-breaking win in the 100m breaststroke during the Rio Olympics, Peaty was obviously elated to be cheered on by his parents and his girlfriend, and on her Twitter, Zair was very vocal about her excitement for this magnificent feat:

So, so sweet. After this incredible run at the Rio Olympics so far, Peaty is set to become a major worldwide swimming star and it sure looks like he's got the right support in his girlfriend. Good luck to these two!