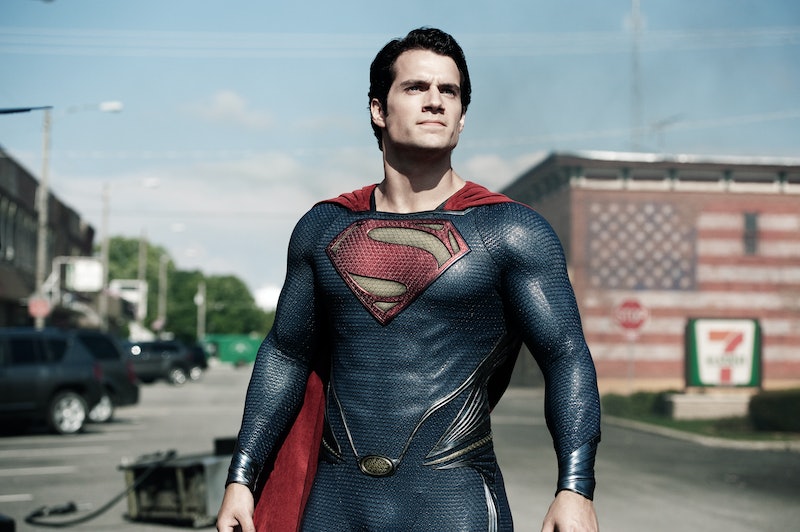 Amid all the hooplah about Batman v. Superman, Suicide Squad, and the state of the DC Extended Universe, Superman fans may be wondering — where the heck is that Man Of Steel sequel we were promised? Before the world had ever even heard the term "DCEU," Henry Cavill starred as the third big screen iteration of the world's most popular superhero in Zack Snyder's 2013 reboot. As most superhero movies do these days, Man Of Steel was soon greenlit for a sequel. But that sequel gradually morphed from a second standalone Superman movie into a prequel for the studio's upcoming Justice League team-up film (this spring's Batman v. Superman: Dawn Of Justice), and plans for an official Man Of Steel 2 were put on hold… until now. The Wrap is reporting that Warner Bros. is now once again actively developing a Man Of Steel sequel.

That's obviously terrific news — if the studio can get it right, of course; the first three films in the DCEU haven't exactly been home runs. While they've all made good money and have passionate fan bases, they fared poorly with critics and have been far from the runaway successes that Warner Bros. likely hoped for. (BvS, the first big screen live-action match-up between the world's two most famous superheroes, didn't break the $1 billion mark worldwide — a benchmark that The Avengers and its team of Marvel B-list heroes breezed past twice.)

Here are seven things we need from a Man Of Steel sequel to make sure it does the Man in Tights justice — in my opinion:

Call me old-fashioned, but Superman is supposed to stand for truth, justice, and the American way; not "glumness," "scowling," and "mass casualties." I'm not saying that Man Of Steel 2 has to be a beacon of sunshine — the movie itself can still be "dark" or "gritty" or "somber" or whatever adjective you want to use to describe the DCEU's house style — but it would be nice to see a Clark Kent who is confident and optimistic for once.

Since MoS dealt with Kal-El's hesitancy to become a hero and BvS deconstructed the character even further into a pseudo-villian, we have yet to have a movie where Henry Cavill just gets to be Superman. It's like if Sam Raimi had gone directly from the origin story of his first Spider-Man film to the emo-Peter Parker of Spider-Man 3 without the franchise-best Spider-Man 2 in the middle. It's time to let Superman be super — and maybe crack a smile along the way.

Warner Bros.' decision to kickstart a shared universe came so suddenly that both movies since have been stuffed to the gills with cross-promotional advertisements for sequels still to come. In the MCU, teasers like that are typically relegated to after-credits scenes; but in the DCEU, they're shoehorned into the films themselves, in often distracting ways. (I challenge you to find one person who hasn't picked up a comic book who understood what that giant Omega symbol carved into the ground in Batman's dream was all about.)

It's one thing if these teasers were integrated more seamlessly into the plot of each film. But it cheapens the experience if the audience walks away feeling as though they paid money to watch what was essentially a two-hour advertisement for another movie entirely. Superman is a strong enough character to stand on his own without needing product placement for other DC franchises.

Say it with me: no more origin stories. Despite the fact that we've already seen the deaths of Thomas and Martha Wayne in the likes of Tim Burton's Batman, Christopher Nolan's Batman Begins, and FOX's Gotham, we had to watch them get shot again not once, not twice, but three times throughout the course of BvS. Thankfully, Man Of Steel got Superman's origin story out of way, so the sequel shouldn't have to go back to the well.

While flashbacks can be useful, too many of them can rob a film of forward momentum. The entire first 30 minutes of Suicide Squad are essentially a montage of flashbacks, which means nothing really happens at all until the second act of the film — and the pacing suffers for it. I challenge WB to make a superhero movie that lives entirely in the moment, without flashbacks, visions, or convoluted dream sequences-within-dream sequences.

For all the flak that the Marvel Cinematic Universe gets for its weak villains — Loki notwithstanding — the DCEU hasn't had it much better. General Zod was a shouty zealot with a Voldemort-like obsession for genetic purity; Lex Luthor was a twitchy millennial; Doomsday was a generic CGI monster; and Enchantress and her magical McGuffin machine were the definition of one-dimensional, with no more motivation than Thor: The Dark World's bland dark elf Malekith or Guardians Of The Galaxy's vague Kree warrior Ronan.

What gives? Unlike Marvel, which signed away its rights to all of its most iconic villains like Doctor Doom, Magneto, and Venom along with its Fantastic Four, X-Men, and Spider-Man franchises, DC retains full use of its entire rogues' gallery. So why are they having such a hard time coming up with a good bad guy? Now that we've already seen Cavill's Clark Kent in two previous films, surely they can devote a little more time in Man Of Steel 2 developing a foe who's worthy, complex, belivable, terrifying, and memorable.

In conjunction with that previous point, please don't bring back Lex Luthor. Eisenberg's tic-ridden performance as Superman's arch-nemesis was one of the most divisive aspects of BvS , and yet the end of the film — which featured Luthor finally getting shaved down to his trademark chrome dome — seemed to be promising even more twitchy villainy to come. Instead of doubling down on their controversial casting choice and trying to find a way to make Eisenberg's Lex work, the studio should just cut their losses and focus on a new baddie for the sequel.

Even if Eisenberg's performance had been unanimously well-liked, there's still the issue that Lex Luthor as the antagonist is a rather been-there-done-that choice for a Superman movie. Gene Hackman's take on the character is one of the most iconic movie villains of all time, and Kevin Spacey delivered a delightfully unhinged turn as the megalomaniac in 2006's Superman Returns. Trying to reinterpret a character in the shadow of such great performances is a thankless task — even Jared Leto is currently struggling with it as the Joker in Suicide Squad — so maybe it's time to let Brainiac, Bizarro, or Metallo have their moment in the sun.

6. Something For Amy Adams To Do

Amy Adams has five Oscar nominations. We should be finding her more to do than getting kidnapped, falling off of high places, almost drowning in wells, and performing in intimate scenes where she's completely nude while her male scene partner gets to remain fully clothed. BvS tried to do something interesting with her character, using her journalistic prowess to unravel Lex Luthor's scheme — but that scheme was too unnecessarily convoluted to make any sense and it was all forgotten anyway by the time Batty and Supes started punching each other.

The superhero's dreamy and constantly-imperiled love interest has been a staple of the genre since its inception — but that doesn't make it any less problematic. We have to try to do better. We have to try to give Amy Adams material she deserves… or she might pull a Natalie Portman and leave the franchise for greener pastures.

I'm sure Zack Snyder is a lovely human being, but it's time to hand the reins to someone else. By the time Justice League rolls around in November of 2017, he will have helmed three movies for the DCEU — one more than MCU trailblazers Jon Favreau and Joss Whedon directed for their acclaimed franchises. If there's one thing Warner Bros. should be commended for in their handling of the DCEU, it's their commitment to diversity behind the scenes; while all 13 Marvel films to date have been directed by white men, directors of upcoming DC films include Wonder Woman's Patty Jenkins, The Flash's Rick Famuyiwa, and Aquaman's James Wan.

The studio should continue this trend by hiring an exciting new filmmaker to take over the Man Of Steel franchise. After two misfires in a row, perhaps a fresh face behind the camera is just what Superman needs to reach new heights.

Oh, and also — please don't end Man Of Steel 2 with a beam of light shooting above a city into space like Suicide Squad or Ghostbusters or Fantastic Four or Man Of Steel or The Avengers or Transformers: Dark Of The Moon or Iron Man or seemingly every other superhero/action movie in recent memory.