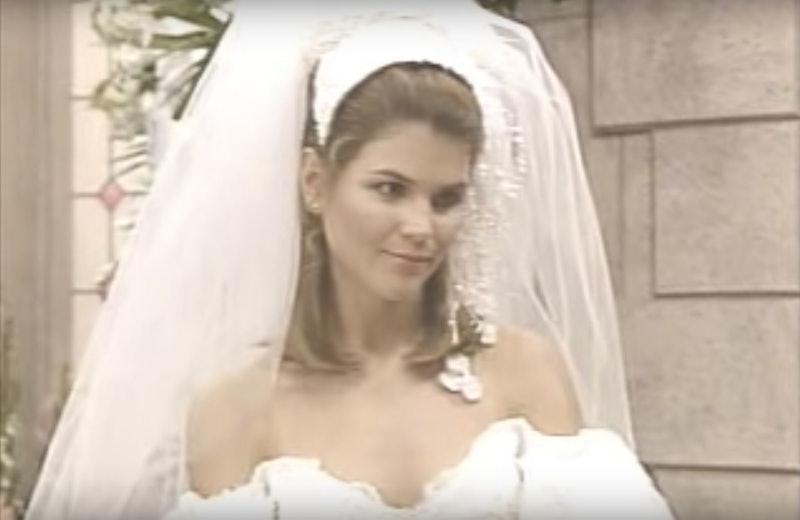 Having it all is a myth, unless you're female wonder Rebecca Donaldson, or we as like to call her, Aunt Becky. Lori Loughlin's iconic Full House character embodied everything a strong-willed, modern-day woman could be. She was smart, witty, an exceptional aunt, determined career woman, and gave the best advice this side of the Mississippi. When she fell in love with the hunky Uncle Jesse, she committed to loving him and their family, but didn't lose sight or herself in the process. Aunt Becky was goals to D.J., Steph, and other ladies of the show way back when, and she's still goals for us now.

If there's one thing that hasn't changed since the '90s, it's the confusing nature of dating and relationships. Becky effortlessly had all that messy love stuff down pat (for the most part), and many things she experienced on the show could still be applied to today. From input on prom to marriage, Becky called the shots in her life and was the sassy voice of reason in the house, which is why all of our love lives would be in shambles more than they already are without her. In case you forgot, here are some of the best lessons we learned about love from the one and only aunt to all of us, Aunt Becky.

1. The awkward young love we experienced growing up was actually fun, guys.

Thinking about middle school relationships is as uncomfortable as watching Jesse perform another Elvis impression. But Becky looks back at her time in Jr. High School, when she had her first "boyfriend, slow dance, slow kiss," as "fun." We probably should, too.

2. "You should never do anything that you're not comfortable with."

When D.J. is getting ready for her first prom, she tells Aunt Becky that she's nervous because her boyfriend Steve wants to go to an after party in a hotel room. Becky's advice is as necessary to our existence as another surprise Beyonce album.

3. First impressions are everything, which is exactly why you shouldn't try too hard at making a good one.

Becky couldn't have been less phased when she met Jesse for the first time. She not only compared him to her brother, but when he asked what Danny said about him, she responded: "That he had a brother-in-law named Jesse." Cutthroat as hell. And it worked like a charm.

4. Being in a relationship doesn't mean sacrificing your dreams.

Even after Becky and Jesse became hot and heavy, she never lost herself in her relationship. She persisted on hosting Wake Up San Francisco! and not only became a producer of the show, but was given her own national talk show, Wake Up, USA, with Danny. Literal goals.

5. That said, it's important to support your partner, too.

When it came to Jesse's music, Becky was his ride-or-die, number one fan, even when it may not have been the most successful. Plus, she encouraged him to get is GED. There's no I in power couple.

6. You should definitely put a significant other in their place when need be.

When Jesse mocked Becky, she never hesitated in serving it back ten times harder. For example, when he made fun of her cooking in front of the family, she threatened to take away sex that night. Check mate

7. Sometimes sacrifices do have to be made.

Becky gave up an apartment that she and Jesse could've had all to themselves to live in an attic of a packed house because Jesse missed living with his family. When Jesse selfishly went skydiving on their wedding day and was arrested, Becky went to be with him. That's a true bae, right there.

8. Always demand what you want and deserve.

If getting a delicious slice of watermelon to satisfy her pregnancy cravings meant Jesse had to flee to another country just to retrieve it, so be it. She didn't step down and was thus a queen.

9. Only leap to the next step when you're ready.

Although she left Jesse at the altar in their first attempt at marriage, it was worth it to wait until the time was right for her. Not only did it prove Jesse really did love her and that was worth the wait, but it ultimately led them to their happily ever after. The ball can always be in your court.

10. Challenge each other, always.

Like Becky would go through her entire pregnancy without making her man feel what she was going through? Not even. The spontaneity of their relationship remained strong through constant bets and challenges. Not only did this allow them to learn about and respect one another, but see who was truly the boss: Becky with the good hair.

"Best friend" is how Becky described her husband and their playful chemistry just validated that. Even though we loved watching their jabs and power plays, at the end of the day they adored each other and we learned that the couple that plays together really does stay together.

In season 6, Becky tells Jesse that no amount of cars, money, or mansions could substitute for her life with him. If that doesn't melt your icy heart, I don't know what will.

After witnessing many of her life lessons and smart jabs on Full House, it's safe to say: Long live Queen B.