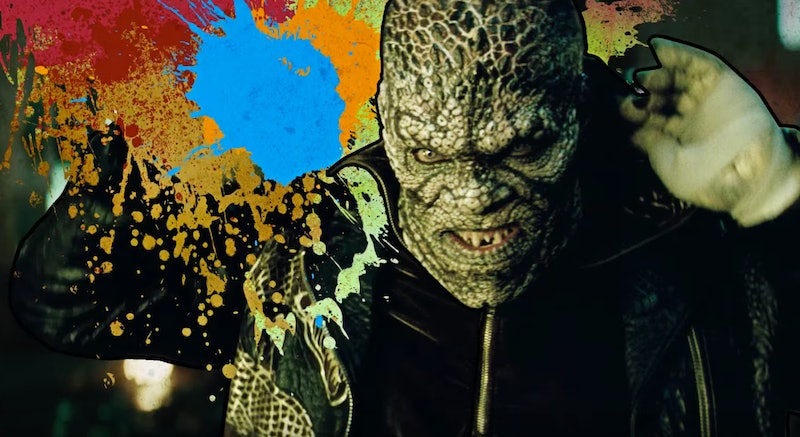 Killer Croc wasn't the most prominent villain-turned-hero in Suicide Squad. Gruff and isolated, Croc barely had two lines in the film. Instead, he let his crocodile demeanor and vicious strength speak for him. By the time we meet Killer Croc in Suicide Squad , he's already been imprisoned, and he's one of the rare members who doesn't get a brief montage origin story. All we know about how Killer Croc got his powers, we learn from images of him being kept in the sewers and feeding on butchered animals while Amanda Waller's voiceover tells us that he's a dangerous criminal who became a monster after being treated as one.

If you left Suicide Squad thinking that Deadshot and Harley Quinn were the most tragic members of the Squad, think again. As Waller hinted, Killer Croc wasn't born a villain, nor did he really choose to become one. Born Waylon Jones, he suffered from a skin condition that made him look like a crocodile — scaly skin and sharp teeth included — for which he was ruthlessly bullied. He was also abused at home by his alcoholic aunt, who treated him horribly for years until he finally snapped and ate her, becoming the monster he had always been regarded as. (In the comics, Killer Croc capitalized on his monster reputation, becoming a wrestler with a traveling circus before establishing a presence as a gangster in Gotham.)

It's unclear if the Killer Croc in the film has the same origin story as the Killer Croc of the comics. But it does seems likely, given Waller's description of him, and the fact that his main move in a fight is to bite his opponent, that, just like his comic origin, Killer Croc eventually became a somewhat ruthless cannibal. That's certainly how actor Adewale Akinnuoye-Agbaje chose to play the part. To prepare for the role, Akinnuoye-Agbaje studied cannibals and crocodiles and alligators to get the psyche and the physical look of Killer Croc just right. "We're not about just making this beast. We're making a being," Akinnuoye-Agbaje said in an interview with IGN. "I was very intent on bringing the characteristics of a crocodile to him," he added.

Killer Croc's powers come mainly from his crocodile side, which, in the comics, not only changes his skin, but also his personality. The crocodile condition gave him incredible strength and the ability to hold his breath underwater for an unnaturally long time (as seen in Suicide Squad). In the comic books, Killer Croc also has healing powers and a heightened sense of smell.

Killer Croc (spoiler alert) survived Suicide Squad, so it's likely we'll get to learn more about him as the DC Cinematic Universe continues to grow. This isn't the last time we'll be seeing Killer Croc's killer powers in action.