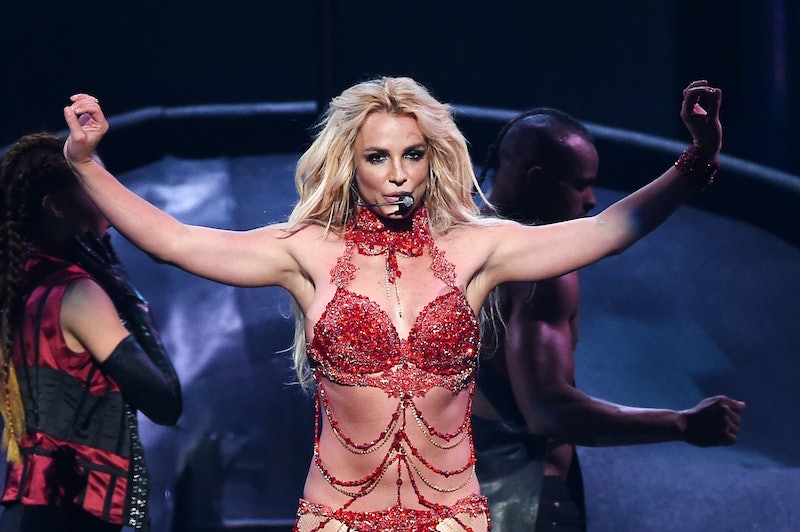 I feel as though I've gone through a time warp: on the same day that Britney Spears dropped her new song "Clumsy," which is off her upcoming album Glory, her former rival Christina Aguilera debuted "Telepathy" off The Get Down soundtrack. It pushes any real '90s kids into a thick bramble of feels, like we're kids watching TRL after school again — so excited to watch our favorite pop idols that we haven't even taken off our clear, plastic backpacks yet. And yeah, it isn't as though someone like Hoku is coming out of the woodwork for the first time in a decade (OK, that was '00s, but still) — this duo releasing new music isn't super weird. But, it is strange to see (hear?), though, because it feels as though Spears and Aguilera have taken on ever-so-slightly grown-up pop star roles over the years... and it's time for a true comeback.

You remember the elementary school dance you were at when you first heard "Genie In A Bottle." Even if you didn't understand what it meant to be "rubbed in the right way," you knew it was a bomb track, and coveted a fringe-y crop top and orange pants of your own (your mom gave a firm "no" to that one). You were on visually shocked and audibly pleased by her "Dirrty" days, and when she went all Old Hollywood during the mid-2000s Back To Basics era, you were firmly on board.

But now, we see Aguilera as more of mentor, not someone breaking her best moves out in a music video. She's parked firmly in a chair on The Voice, which, in my opinion, has brought way to a much more musically passive Xtina, to say the least. This isn't to say her role on The Voice isn't great, because it is — it's just a different career path for the star.

And then there's Spears. The Princess of Pop once held court with worldwide tours, cuddling up with anacondas and showcasing latex jumpsuits. Now, she reigns over a residency in Vegas. It's a move that, yes, you're in a solid enough place in your music career where you can sell to a crowd night after night. That's inherently huge and I don't want to undermine that. But it is also a marker that you're maturing into a different artist than before.

Of course Aguilera and Spears are allowed to take on different career paths and roles. But, as a '90s kid, I just yearn for them to bring back the perfectly curated pop music that made the late '90s so fun. I yearn for them to take us back to the days of "... Baby One More Time," and "What A Girl Wants," and to put out some truly iconic albums. The release of these songs might be proof that this is finally happening.

You can listen to both tracks below and relive your elementary school glory days.