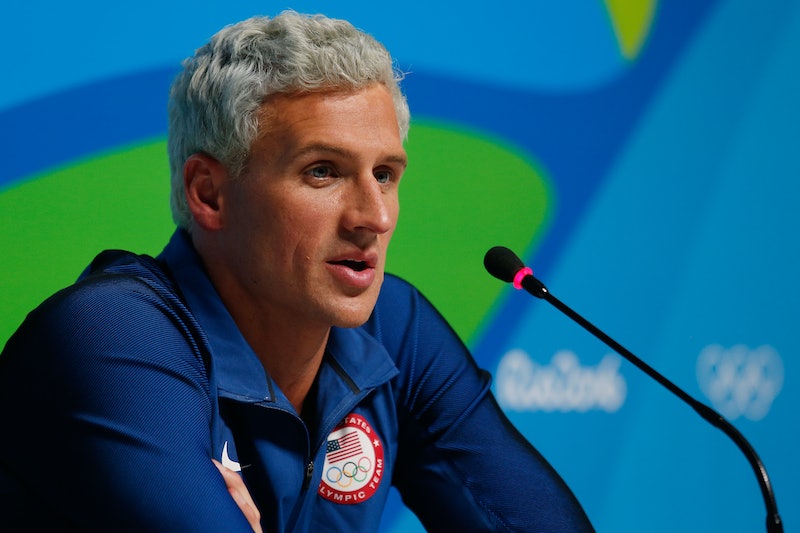 No one's having a better time at the 2016 Rio Olympics than Matthew McConaughey. Well... except for maybe Ryan Lochte when he's hanging out with Matthew McConaughey. The actor and Olympic gold medal winner took time off from their busy routines to snap a photo together, so Lochte could post it on his Instagram amongst photos of himself doing Olympic things — like eating spaghetti with bud Michael Phelps. Because now that McConaughey has made himself the unofficial most-relatable-person at the Olympics, "chillin in the warm down pool area" with the actor is a very Olympic kind of thing to do. Of course, the photo leads to me to assume that either McConaughey and Lochte are an unbreakable best friend pair — or they are training to become one.

Though McConaughey is attending the 2016 Olympics with his wife, he seems to be spending a lot of time by himself in the stands (which, OK, makes sense, because Camila Alves is the "lifestyle correspondent" at the games for E!). Like of all us, McConaughey's experiencing the type of emotions one can only experience while watching the games. Unlike us, he gets to meet the famous swimmers like Lochte while doing so. Even though Lochte doesn't have any idea how to spell McConaughey's name (he referred to him as "Mathew McConagauhey") that doesn't mean these two aren't destined to spark a deep and meaningful friendship. If your not convinced, here's more reasons why they should be homies for life. (Or at least for the remaining duration of the Games.) But first...

OK, as I was saying.

They've Both Been Blonde

Lochte's currently sporting some blonde-ish strands, but you know who's a natural-born blonde? Your boy McConaughey.

They Both Have Catch Phrases

They Both Have Dimples

You guys, so cute. Poll question: Whose dimples are more dimply?

And Unique Senses of ~Fashion~

They know how to express themselves.

They Both Love Michael Phelps

Lochte and Phelps have a long standing friendship, and McConaughey looks up to Phelps's true talent (read: he likes his shiny medals).

They Both Love Swimming

In fact, I know that McConaughey likes the Olympics so much, he has decided to permanently move into their stands and take up residence. OK, maybe I just made that up but IT COULD HAPPEN.

Mark my words, by the time the next Summer Olympics rolls around, McConaughey and Lochte will be the best of friends.