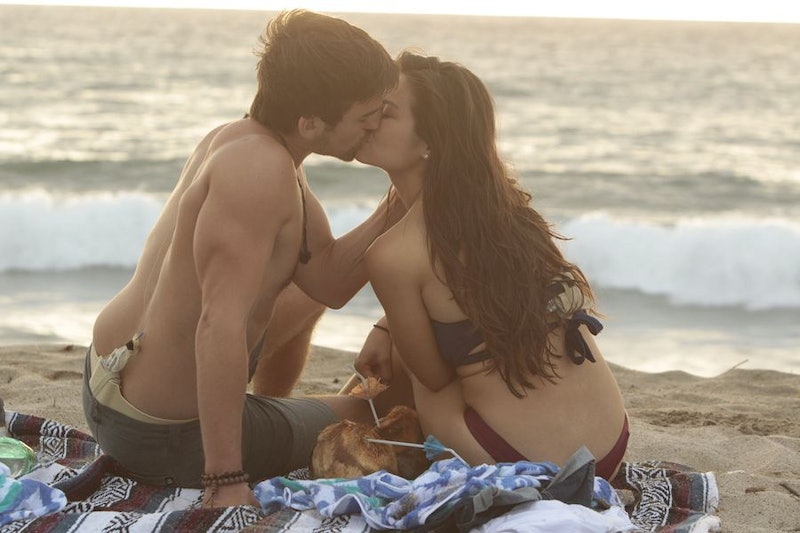 For anyone who watched Bachelor In Paradise last summer, you’ll know that Ashley Iaconetti was full-out in love with Jared, and he wasn’t feelin’ her like that. Ashley spent most of the time on the show either begging Jared to date her or crying because he wasn’t sure about how he felt for her. And yes, if you think it sounded long and arduous, you’d be right. But now, Ashley Iaconetti is due back on Bachelor In Paradise 3, and previews of the season show both Jared and Caila getting cozy on the beach and Ashley telling Jared that she’s not sure if she can see Jared with another woman yet. Ashley and Jared are still really close friends (they’re all over each other’s Instagrams), so I will assume Ashley got over that.

Where does that leave Caila and Jared? Well, the promos also show Jared and Caila making out a ton, so whatever it is that goes on with Ashley gets resolved. Jared and Caila are actually a good match in my mind. They’re of the quieter ones in the Bachelor In Paradise cast — a little pensive, a little shy, and plenty cute — and I don't think Jared or Caila would be good with say, a Lace or a Chad, respectively. Bachelor In Paradise only lasts for a few weeks, though, and then it's back out into the real world. In the real world, Caila lives in New York City (she moved there after she was on The Bachelor), and Jared's Twitter bio says lives in Rhode Island. That's oh, only about four hours apart (if the traffic is good), but it can be taxing on a relationship — all that travel back and forth.

Right now, it seems like Caila is busy promoting her blog and her new business opportunities (she, like her other Bachelor ilk, has also teamed up with brands like Hello Fresh).

Jared, on the other hand, has spend most of his summer hanging out with friends and family on the beach and boardwalk in Rhode Island.

I know that the Bachelor In Paradise producers forbid taking snaps of each other for social media before the show ends, but man — not even a hint! Jared hasn't been in New York City at all that I can tell, and Caila hasn't been to New England. Whether because of Ashley and her intense friendship with Jared or because of the distance and schedules between them, I'm thinking that Jared and Caila's relationship stayed in Paradise.