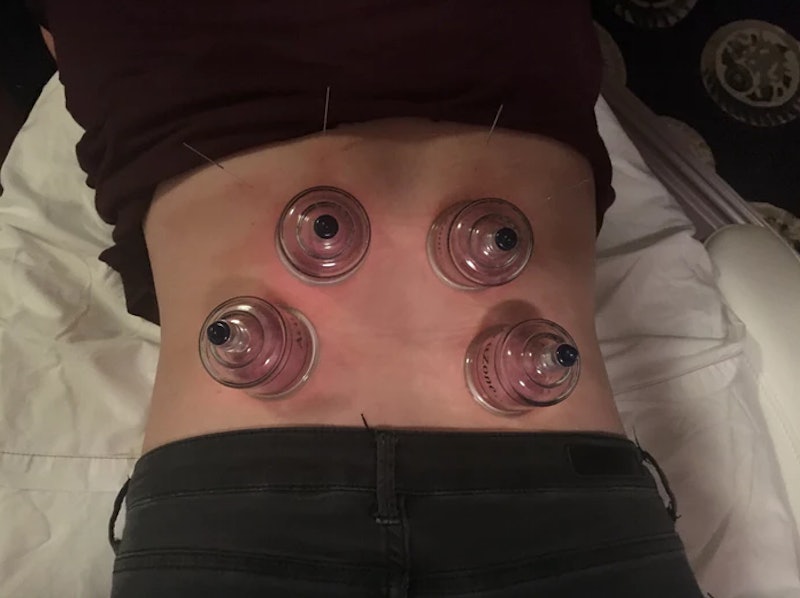 I'm a big fan of alternative health treatments. Reiki, chiropractic, cranial sacral therapy — I find them all very helpful (and interesting). But when the prospect of trying cupping was presented to me, I can't say I was immediately interested. I mean, have you seen those red marks on Michael Phelps? What on earth has to happen to a person to produce such intense hickies? Still, my curiosity for all things alternative health-related got the better of me, and I decided to give cupping a try. I figured if it's good enough for Olympians, then it's good (and safe) enough for me. Plus, I wanted in on all the potential health benefits I had heard about.

So off I went for a treatment at Floating Lotus in New York City. On my way there, I came to terms with the fact that I was probably going to be spending the afternoon in agony. Not only was I worried about the hicky factor, but also that I'd heard cupping usually involves fire. (So badass, but also kinda scary.)

When I met with Joel Granik, L.Ac., co-founder of Floating Lotus, I was surprised to hear that no flame would be involved. "The modern way of doing it is with plastic cups, no fire necessary," Granik says. The traditional way I had been expecting involves torches and glass orbs, which Granik had on hand. "It has the exact same effect as the modern treatment," Granik says. The torch is inserted quickly in the cup, where the heat burns up all the oxygen. Then, when the cup is placed on the skin, it creates a suction and begins to pull.

Pretty cool for sure, but I was happy to go with the modern method. It involves some simple plastic cups and a tool to create the same type of suction — all in the name of moving my stagnant blood. "That is the core idea of cupping," Granik tells me. "We're taking debris, fluid, and stagnant blood from deep inside the tissue, pulling it up to the surface, and allowing your body to flush it. Once it flushes through, you can heal."

I was intrigued by the thought of moving my old blood, but even more intrigued when Granik began to ask me questions about the rest of my body. He wanted to know about my digestion, my moods, my stress levels, my periods, and any pain I was having. When I said I was feeling sleep deprived, he started to form a plan to help me get better rest. (Yay.) And when I complained about pain in my mid-back, he decided to focus the cupping there to help set things right.

Apparently, my blood was getting trapped in my mid-back due to my mild scoliosis, as well as my horrible habit of hunching over my computer. Oops. Granik said cupping would move that stuck blood and help things to feel better. Cue my mind being blown.

The treatment started with some acupuncture — which was targeted at my sleep problems — and 10 minutes spent meditating under an infrared heat lamp. I then lay on my stomach while Granik applied four cups to my messed up back. The cups didn't hurt, by any means. But I did feel a mildly intense pulling sensation. I also felt a little breathless. Maybe it was the shock of this new feeling? Or the simple fact my skin was being pulled taught? Whatever it was, it didn't last long.

And neither did the treatment. I relaxed for a few minutes (and took selfies) while the cups did their thing. Unlike Olympians — who Granik believes get treatments for up to 30 minutes — my whole cupping experience only lasted about five. Before I could even wrap my head around what was happening, Granik was releasing valves and my skin was returning to its normal locations. An odd sensation, to say the least.

For the rest of the day, I could definitely feel something was different on my back — but not in a bad or painful way. In fact, I felt pretty good. For the first time in ages, I didn't have any aching pain, and my whole body felt incredibly relaxed. Pretty amazing, right?

Even more amazing, however, was what I saw in the mirror the next morning — bonafide, Michael Phelps-esque red circles. Granik explains that they would probably only last three to four days, and assured me they aren't a bad thing. "A common misconception is that cupping marks are bruises are broken capillaries," Granik says. "In fact, there is no tissue injury from cupping."

Despite how strange cupping looks, and how bright the leftover marks may be, the whole thing was far less dramatic than I expected. It's even something I plan to add it to my list of go-to alternative health treatments. And how could it not be? As I write this 24 hours later, my back feels virtually pain-free. Plus, I'm getting used to my fashionable cupping marks. Time to go walk around in a bathing suit and show them off.