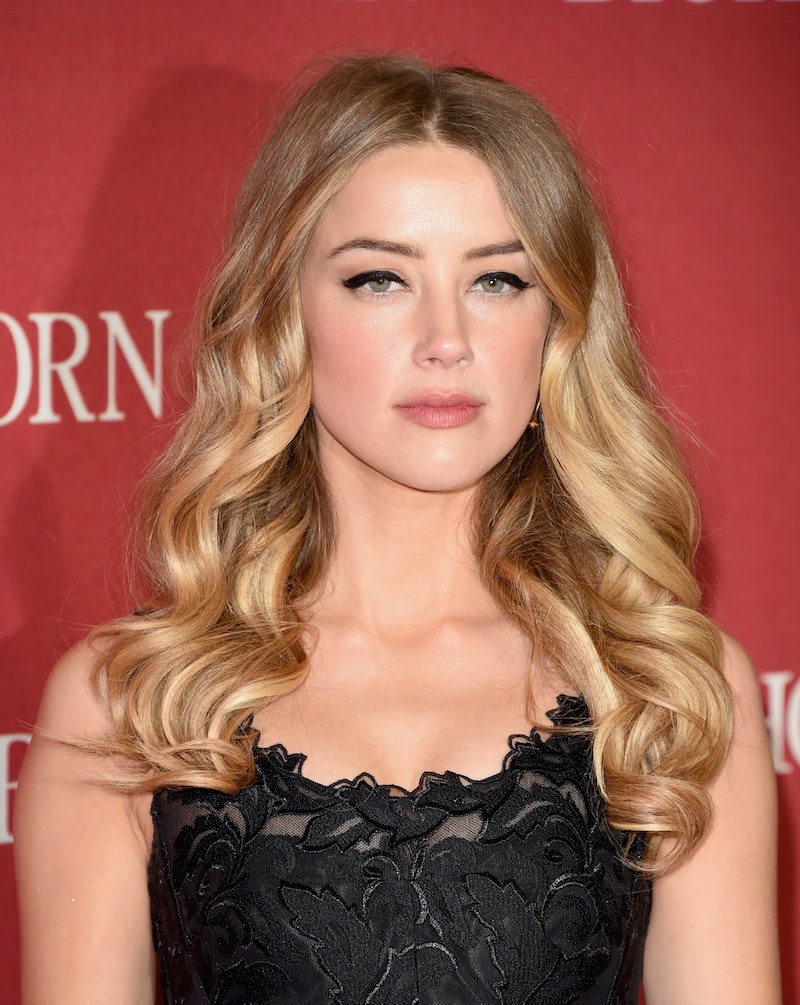 On Tuesday, after a relatively short divorce process for Hollywood (their split was announced in May), Amber Heard and Johnny Depp settled their divorce. According to TMZ, they filed legal documents on Tuesday, and the same day, the former couple released a statement to the publication confirming the settlement, which also includes the domestic violence petition filed by Heard. (Depp previously denied Heard's claims of abuse through his lawyer, Laura Wasser, who told People in May, "Amber is attempting to secure a premature financial resolution by alleging abuse.")

The domestic violence claim resulted in a lot of scrutiny and judgment being thrown Heard's way. Many have felt that they were for financial gain, and even used the word "gold digger" to describe her. However, their joint statement shows that the 30-year-old actor is donating her divorce settlement money to charity.

The statement released by TMZ reads as follows:

First, they both say in their statement that none of this has been for "financial gain," and that they never once "made false accusations" for money. Then, to read that the Magic Mike XXL star is giving her money to charity... well, that should put any hesitation about Heard's "true" motives to bed. It is not known which charity will receive Heard's donation, but TMZ claims that Depp agreed to pay Heard $7 million. Bustle has reached out to reps for Heard and Depp regarding this claim. As for the case being settled, Heard's lawyer confirmed it, but gave no comment. Bustle has yet to receive a response from Depp's reps.

In June, People reported that Heard withdrew her request for temporary spousal support from Depp. The Danish Girl actor felt that asking for financial assistance from Depp was being "used against me to distract and divert the public away from the very serious real issue of domestic violence." That, once again, goes to show that her intentions never should've been doubted.

In a guest column written for The Wrap in May, comedian Doug Stanhope, a supposed friend of Depp, accused Heard of blackmailing Depp. Her lawyer, Peter Sample, released a statement to The Wrap denying Stanhope's claims, and said the "allegations against Ms. Heard are absolutely and unequivocally false." He also said the letter had "no basis in reality and is nothing but the typical celebrity muckraking for profit."

When that type of accusation is put out into the world, many start to question whether the alleged victim is telling the truth. Moreover, other alleged victims may have a hard time coming forward, especially if they feel like their claims won't be taken seriously or that they will be immediately labeled as liars.

As Heard's friend, iO Tillet Wright expressed in an essay shared in June, "Right now, every battered woman in the world is watching this media circus, internalizing the message that when they come forward for help, when they break the cycle, they will be called a gold digger, a cheater, and be accused of having faked it all for attention."

To this moment, there are still some who believe Heard came forward with her claims for the money and aren't buying her donation to charity. Here are a few who aren't holding back on Twitter.

Then there are those who support Heard, and hope others will stop referring to her as a "gold digger:"

Depp certainly has a bigger income than Heard. According to multiple sources, Depp is worth $400 million, and according to Celebrity Net Worth, Heard is worth $9 million. Which makes sense, considering Depp's lengthy career of starring in big-budget movies compared to Heard's newer career, which has mostly consisted of doing smaller films. But that does not mean Heard would cry domestic abuse just to get more money. Heard has her own successful career, her own money, and could've easily requested more of Depp's huge fortune (she originally asked for $50,000 per month in spousal support before withdrawing that request), but she chose to walk away with the alleged $7 million and to give it to charity.

To sweep Heard's claims under the rug just because Depp is beloved and a well-known actor, or because you don't want to believe Depp is capable of such a thing, or because Heard's claims are only claims, is extremely dangerous. Way too many women are not believed when they come forward with any type of abuse allegations. According to the Feminist Majority Foundation, "Only about half of domestic violence incidents are reported to police," because many victims don't feel like they will be taken seriously or that authorities will actually act on it. If the violence is reported to the police, the Foundation says that a study conducted by the D.C. Metropolitan Police Department found that "in only one-third of the domestic violence calls did an officer take photographs or ask about prior abuse."

Yes, Heard's domestic violence claims were just claims, but not taking them seriously and suggesting that she was just a "gold digger" not only stifles her voice, but also makes it that much harder for other victims to come forward.

More like this
Amber Heard Says She Fears Being Sued By Johnny Depp Again
By Jake Viswanath
Amber Heard Stands By “Every Word” Of Her Testimony Against Johnny Depp
By Jake Viswanath
Selena Gomez Is Fine Being Single, But She Still Manifested Romance On 'SNL'
By Martha Sorren, Jake Viswanath and Jack Irvin
Martin Hancock’s Wife Played A Key Part In His Return To 'Coronation Street'
By Catharina Cheung
Get Even More From Bustle — Sign Up For The Newsletter