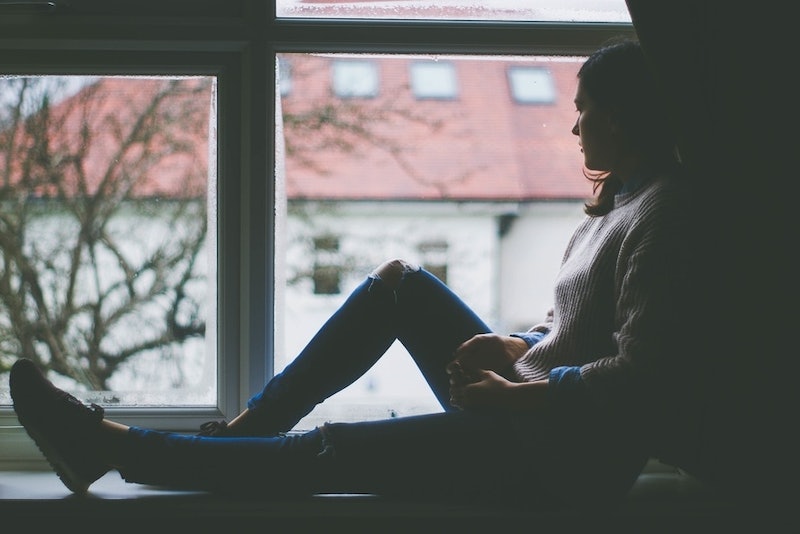 Sometimes, despite having all the love in the world for each other, you can still find yourself on shaky ground with your partner. Disagreements abound, the trust isn't there, and you find yourself preventing the end at every turn. But did you ever consider that a breakup might be just what your relationship needs?

I know, the thought of parting ways with your SO (even if it's just temporarily) can be downright scary. And yet, there's a pretty long list of times when it could be the best idea ever. "Sometimes a breakup can make a relationship stronger than it was before," says relationship expert Mara Opperman in an email to Bustle.

Of course it's by no means guaranteed to work. A true breakup (like, the kind where you fight and leave and that's that) is really hard to come back from. As Opperman says, "... most of the time, breaking up means the relationship is completely over — both platonically and romantically."

But if you sit down with your partner and discuss taking a break, it could truly mean bringing your relationship back from the brink. Sound plausible? Then read on for some of the times when this breakup idea really could be the best thing for your relationship.

1. When You Could Both Use A Little Space

They say distance makes the heart grow fonder, and that really can be the case when parting ways with your SO. "Time and distance are known to reignite love and longing for each other," Opperman says. After a few days or weeks apart, you might find yourselves returning to the relationship with fresh (big, heart-shaped) eyes.

2. When You Both Need Time To Reflect

If you're all mixed up in drama, it can be difficult to reflect on the relationship's greater issues. Breaking up helps create distance, as well as some free time to mull things over. "It also allows both of you the chance to reflect on what went wrong and then decide if you want to make realistic changes to improve the relationship," Opperman says. Hopefully the space will help you know just what to do.

A healthy relationship consists of two people who know how to live their own lives. If you and your partner don't know how to do that, taking a break can help. "Spending time apart is a great opportunity for self-discovery," said Macaela Mackenzie on Greatist.com. Having time apart means figuring yourself out so you can return to the relationship as whole (non-codependent) people.

4. When Personal Issues Are Getting In The Way

There's no better time than right after a breakup to work on your own issues. And the same thing will be true for your ex. Do you have anger problems? Does he or she struggle to open up? Time apart can offer a chance to work on these personal issues, according to Opperman.

5. When A Clean Slate Is In Order

If things are messy beyond repair, starting over from scratch could be an excellent idea. "After a breakup, you don't owe your ex anything and you certainly don't have to get back together," said Natasha Burton on Cosmopolitan. "But, if you choose to try again, you both know that your hearts are really in the right place. And that's a great foundation from which to build a new relationship."

6. When The Relationship Has Lost Direction

If you two are just sort of in this thing, but have no real direction, a breakup might be just the jolt you need. As Burton said, "Sometimes, a breakup ... will take your relationship to the next level." It's not guaranteed, but it's worth a try.

7. When You're Both Craving Some Perspective

Ever break up with someone and then realize you made a horrible mistake? That was likely due to a healthy dose of perspective. Of course it's not the only reason people feel regret after a breakup, but there is something to be said for the whole "you don't know what you got 'til it's gone" phenomenon.

8. When You Aren't Being Your Truest Selves

Lots of couples hide their quirks and eccentricities in the beginning of a relationship, but most drop the pretenses as time goes by. If you and your SO have yet to do this, it can lead to a sense of dishonesty in the relationship. A breakup can help you both be more real, according to Burton, and help you both return to the relationship with nothing to hide.

9. When You Don't Know How To Argue

Since knowing how to disagree with your SO is an important (and healthy) part of being in a couple, it can really start to become a problem if you guys simply don't know how to fight. Going through a breakup can be a chance to hash things out, and learn how to communicate. If you decide to get back together, things will likely be healthier.

10. When You Just Aren't Ready To Date

If you ended up with someone perfect, but just don't feel ready to date, it can drag the whole relationship down. By taking time apart to work on yourself, you can get back together in the future when the timing feels better. If it's meant to work out, it will.

A breakup can help you value each other more. And once you get back together, things are likely to be totally different. As Burton said, "Being apart can show you how important you are to each other — and make you realize you really want to be committed this time around."

It doesn't always happen this way. And remember that, more often than not, a breakup ends up being a permanent thing. But sometimes a purposeful separation can offer perspective, and help you both love each other more than ever before. (Aww.)

More like this
The Best Time To Date After A Breakup, According To Experts
By Bustle Editors
20 Things You Should Never Tolerate In A Relationship
By Rachel Sanoff and Kathleen Ferraro
12 Ways You're Sabotaging Your Love Life
By Teresa Newsome and Lexi Inks
25 Things I've Reduced My Life To, In Addition To WFH In My PJs
By Ginny Hogan
Get Even More From Bustle — Sign Up For The Newsletter