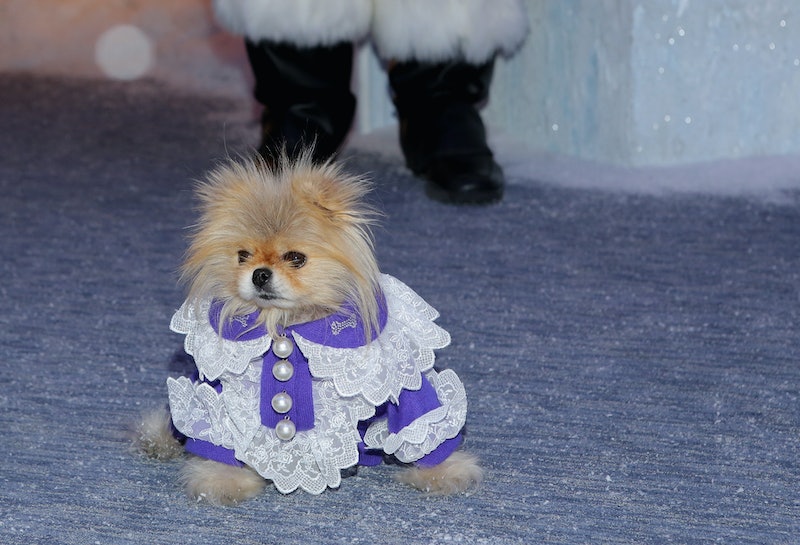 A lot of the time when I watch reality TV shows on Bravo, I find myself wishing that I had a life like the cast members have. Other times, I think that it would actually be a lot better to have the life of one of the Bravolebrity pets. They get all of the benefits of being on reality television without actually doing any work or being involved in any drama. These pets are super spoiled, which makes me wonder about the net worths of the Bravolebrity pets. Obviously these animals are not running businesses or paying taxes, but there are things that I feel like a pet would value in the same way a human would money, so I've come up with my own net worth rankings that would apply to pets.

These pets are so blessed that there are actually some humans who would be jealous of all of the things that they have in their lives. From the animals on Real Housewives to Shahs of Sunset to Vanderpump Rules, there are a lot of "rich" pets with "net worths" that I can interpret based on some of the luxuries afforded by their owners. These pets have designer wardrobes, acres to roam around in, and fans of their own.

Dina Manzo was always very private about her life when she was on Real Housewives of New Jersey. She never revealed much and her loved ones very rarely appeared on the show, if they even appeared at all. Dina's hairless cat, Grandma Wrinkles, was always by her side, though, and her unique appearance made a major impression on the viewers. Nevertheless, I feel like she's not really involved in any part of Dina's business, so she's kind of like the cat equivalent of someone who has a lot of Instagram followers, but is isn't high profile enough to get paid for posts.

Kingsly is Kim Richards' dog. She loves him so much and he has appeared a lot on Real Housewives of Beverly Hills. Not only that, but he has also instigated a lot of drama. Kim and her sister Kyle Richards were really at odds when Kingsley bit one of Kyle's daughters. Kingsley is really not in the good graces of many people, which is sure to make his net worth plummet.

Stassi Schroeder's dog, Zoe, really came into the spotlight during the first season of Vanderpump Rules when Stassi and Jax Taylor broke up. Stassi was devastated that the dog she shared with Jax was spending so much time with him and his rebound girlfriend who Stassi hated. She honestly seemed more upset by sharing custody of Zoe than from the Jax breakup. Zoe really played a pivotal part in making Vanderpump Rules an immediate hit. Nevertheless, her mom probably isn't racking in the big bucks (at least not the way her boss Lisa Vanderpump is) since she is a former server who quit the show and then returned to a smaller role. Not only that, but Zoe hasn't really had much time in the spotlight, so her pet net worth is probably fading. However, there is hope for her since it seems like Stassi is going to be a bigger part of the upcoming season.

Now that Carole Radziwill seems to be over hating Luann de Lesseps and doesn't play a huge role in the other Real Housewives of New York City drama this season, her story lines are really ruled by her dog, Baby. Baby has had plenty of time devoted to her, including an entire episode where she participating in a dog wedding. This pup is a star in the making as far as reality TV goes. Baby already has a pretty high profile.

Jill Zarin's dog, Ginger, is not a Bravo pet anymore, but she is an OG Real Housewives of New York City cast member. She was always with Jill, and I just don't think that I (or anyone else who watches the show) will ever forget that awkward scene with Ginger licking Jill's nostrils. It was icky, but iconic. Aside from making reality TV history, Ginger really lives a great life traveling with Jill everywhere she goes, which does not come cheap. Ginger is spoiled as Jill's baby, and I'm sure that a lot of dogs would love to be in her place.

Mercedes Javid's dog, Pablo, really was the light of her life. He was present in a lot of Shahs of Sunset episodes, even after his death. MJ notoriously froze Pablo's body in her own freezer and mourned his loss on the show. Pablo will always be remembered by Shahs fans for how happy he made his mama. I feel like Pablo is the pet equivalent to those celebs who became more iconic after death, so I can see his perceived pet net worth rising.

Wacha has the privilege of having Andy Cohen (the king of Bravo) as his owner. This means that he has appeared on Watch What Happens Live many times. He has met so many Bravo personalities and celebrities.The rescue dog has come a long way from his humble beginnings. He even has his own fans and an Instagram page where he endorses dog food! With the fame and devotion that comes with being Andy's dog, we all know that Wacha is very comfortable and well taken care of financially.

Cookie has been a loyal pet to Bethenny Frankel since before Real Housewives of New York City was ever a thing. Bethenny's daughter, Bryn Hoppy, is not on the show, so Cookie is the one family member of hers who appears. Cookie has her own social media following and is the inspiration for Bethenny's pet products in her Skinnygirl empire. The dog's doing pretty well for herself!

Clearly, the Vanderpump pets are the most elite. I don't know many (any) people who have swans for pets. LVP is the only one with the lifestyle to genuinely pull this off. Hanky and Panky get all of the perks and prestige of living at Lisa's mansion. Plus, they have had a ton of screen time on RHOBH.

Lisa's mini horses are actually named Diamonds and Rosé, which is such a Lisa thing to do and I love it. Not only do the horses have luxurious names, but they are also living a luxurious life since they are Vanderpump pets. Of course, they live on Lisa's amazing Villa Rosa property, but they also have their own mini house, which I'm sure a lot of pets are jealous of.

There is no doubt about it: Lisa Vanderpump's dog Giggy is the Bravo pet. He rocks a designer wardrobe that both humans and animals would be jealous of. He gets a lot of screen time on Real Housewives of Beverly Hills and Vanderpump Rules. Giggy even reportedly has a contract with Bravo as an actual cast member, which is amazing to say the least. And on top of all that he has done all this while dealing with alopecia. Such an inspiration for aspiring celebrity pets.

From the instigators like Kingsley, to the king Giggy Vanderpump, Bravo pets have really made an impact in reality TV. So it makes perfect sense to think that they are building up some sort of pet net worth based on their lifestyle, fame, fashion, and other factors. Way to go, you guys!