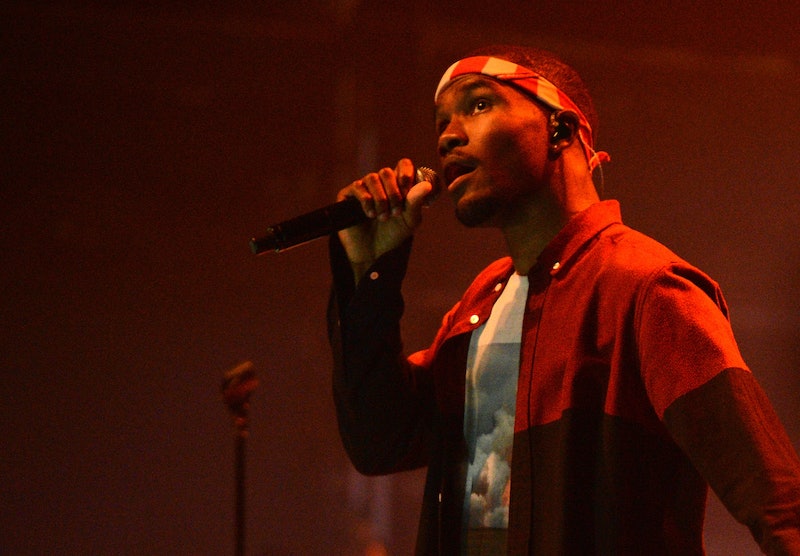 If you are still trying to process Frank Ocean's new single "Nikes," you are not alone. The song is packed with lyrics determined to take you on a visual odyssey, while the video weaves tons of themes like greed, love, human nature, Black Lives Matter, and consumerism into one. That's not all it includes though, of course: "Nikes" is full of pop culture references as well, some you definitely caught and a few obscure ones aimed at music lovers. Would you expect anything less from a song named after the world's most famous sneakers brand?

So yes, the brand Nikes is far from the only brand to get a shout out in Ocean's dreamy song and video that mixes current events and scenes from a wild night out together to paint a picture that is all too relevant to the world's current state of affairs. Ocean does not limit his references to brands, either; a record company, celebrities, and even a social meme all make their way into the four and a half minute long song. "Nikes" proves Ocean is not only a talented artist, he is also a man with a keen eye for the pop culture landscape.

Prepare to be amazed by how many references one song can hold. Ocean's "Nikes" is a pop culture lover's dream, and here are all of the references to look out for while you have the awesome track on replay.

The iconic record label was created in 1994, and gave rap artists like Trick Daddy and Trina their start in the business. Trina appears in the video as lyric plays: "Special shoutout to the icon dynasty, Slip-N-Slide Records."

The famous footwear not only gives Ocean's single a name, it also gets three mentions in the song.

"Said she need a ring like Carmelo" is a clever nod to legendary New York Knicks player Carmelo Anthony, who still doesn't have an NBA Championship ring on his finger despite being a massive presence on the court.

In the midst of a stream of lyrics about what lovers want from him, Ocean goes old school and references Othello, the Shakespearean play.

The moment where a hand slaps a glitter-covered butt and sends glitter flying everywhere is totally reminiscent of the work done by Mad Dame of DAMNED magazine. In fact, that specific shot could be a major reference.

The expensive, designer footwear is the only thing the individuals Ocean sings about in "Nikes" would dare to be caught wearing.

A$AP Yams was a famed rapper (and one of the co-founters of A$AP Mob) who died unexpectedly in 2015 of an accidental drug overdose.

Another famous rapper, Pimp C passed away in 2007 of an accidental cough medicine overdose.

I'm not 100 percent certain Ocean is referencing Ariel when he raps about his girl keeping her scales, but it definitely sounds like it: Ariel gave away her voice to Ursula in exchange for becoming a human.

Founded in 1986, Rap-A-Lot Records is best known for its famous artists like Scarface — and it was also the label Pimp C was apart of.

Yet another fashion shout out, Balmain jeans are incredibly pricey, often costing $1,000 or more.

Early in the video, Ocean is seen surrounded by race cars, all of them sporting advertisements. The image plays into the themes of consumerism that run throughout the song.

Rap goddess Trina makes an appearance in the video alongside the lyrics referencing the record label that launched her career.

In the late '90s, Taco Bell's talking chihuahua commercials were all the rage, and while it is hard to say for sure, Ocean's rapping chihuahua feels like a direct homage.

Rose gets a nod in one of the song's most unusual lyrics: "We breathin' pheromones, Amber Rose." People flock to Rose because she's such a major presence wherever she goes.

Given the depth of Ocean's "Nikes" and the video that accompanied it, I'm sure his fans will still be parsing it for references for months to come.