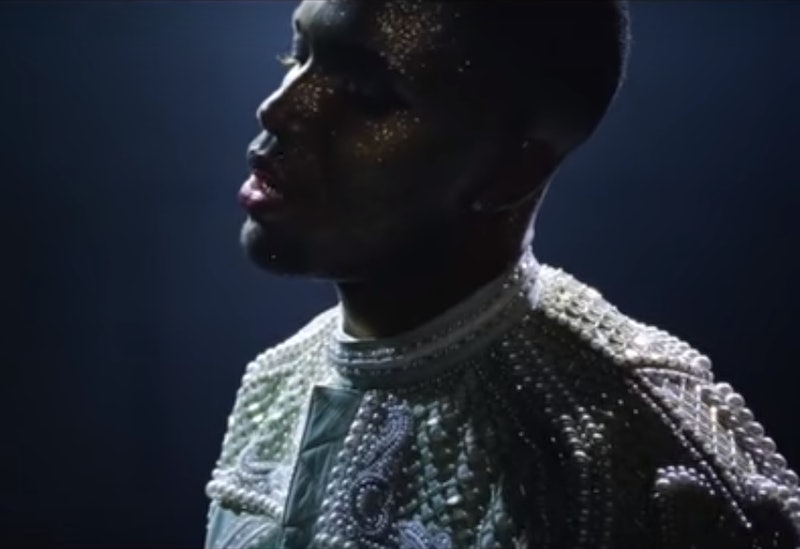 We're deep into what I'm currently calling Stage Three of Frank Ocean hysterics. Stage One brought unrewarded anticipation of Ocean's highly anticipated second album (formerly titled Boy's Don't Cry), as well as many online fan tantrums when it still hadn't arrived. Stage Two brought the arrival of Ocean's surprise visual album Endless on Aug. 19. And now we're at Stage Three, with the release of Ocean's new music video, "Nikes" on Apple Music and his website just a day later on Aug. 20. And it's OK to be a little hysterical, guys, because both the song and the video are an absolute dream. But, having watched the music video oh, I don't know, maybe over 1,000 times now, I couldn't help but notice some similarities between Ocean's "Nikes" and Kanye West's "Wolves" videos. Is Ocean subtly paying tribute to West in the video?

The most obvious connection between the tracks is Ocean himself: In the original version of "Wolves" on West's The Life Is Pablo (before West released a new version on TIDAL) featured Ocean, along with Sia and Vic Mensa. The updated version no longer features him — his verse became a new track entirely called "Frank's Track," — but still, it's a big link. The second connection is also pretty obvious: Both music videos feature the French fashion house, Balmain. The music video for "Wolves" was released heavily featuring Balmain clothing — and, towards the end of the music video for "Nikes," Ocean also appears to be wearing what looks like a white, Balmain jumpsuit. And like, sure, whatever, right? Who wouldn't want to dance around on stage in Balmain if they had the chance, it's surely just a coincidence. Except, upon further inspection, it doesn't seem to be one.

For starters, West is just always going to be associated with Balmain. It isn't just the fact that he helped to market them with his music video for "Wolves," but also that he's helped to make the fashion house iconic within pop culture by wearing their clothes in an iconoclastic manner. Who can forget his and Kim Kardashian's matching Balmain outfits at the Met Gala in 2016 (a fashion choice which he also decided to pair with a set of blue contacts)? They were the same outfits that the couple wore in the music video for "Wolves," and the association has been solidified within the cultural consciousness.

It's not that nobody else could ever possibly wear Balmain but West (this isn't Mean Girls, we can all wear hoop earrings), but more that releasing "Nikes" so soon after the release of "Wolves" and featuring a Balmain ensemble within it, the scene in the video seems to be making some sort of a direct statement. The lyrics which play out over the moment in the video which sees Ocean decked out in Balmain are pretty interesting, after all:

We only human and it's humid in these BalmainsI mean my balls sticking in my jeansWe breathin' pheremones, Amber Rose

OK, so aside from hearing a little too much information about hot it is inside Ocean's pants, it's striking that he chooses to follow up on his Balmain reference with another one about Amber Rose. As we all know, Rose once dated West, and with that in mind, I can't help but bring the connection back to the hip-hop artist. But what does it mean? Overall, I think the reference is nothing but a playful one, perhaps commending both Rose and West for being provocateurs in their own way — people can't help but flock to either.

There's some other visual similarities between the two videos, too. "Wolves" shows West (along with the rest of the cast) with glistening tears running down their faces that appear to shimmer in the harsh lights.

During the Balmain segment of "Nikes," Ocean has streaked his face with glitter. Earlier in the song, he even makes the connection between water and glitter (albeit, whilst talking about rain), but it's still a fun visual connection between the two videos.

The final similarity is probably the most telling. "Wolves" has a cast of supermodels dressed in Balmain featured throughout the video. "Nikes" also appears to have a cast of models featured throughout it, however they're framed in a completely different manner. West's models are dressed up, rigid, and extremely high fashion, while Ocean's cast of models are dressed down, hanging out, partying, and showing off their tattoos for the camera. By the time that Ocean takes to the stage towards the end of the video wearing that Balmain jumpsuit, it looks completely out of place compared to the casual look of the rest of it.

By wearing (and referencing) Balmain in the midst of such a video, Ocean appears to be making a throwback to "Wolves" while also saluting West in the process. It's almost as it's showcasing the space that Ocean maintains (lo-fi, edgy) alongside the one that West does (where everything, even his own life, appears to be produced on a grand scale).

It's an interesting sentiment from Ocean, who has collaborated on four of West's songs in the past and which appears to posit a crucial idea. Of course, this is all pure speculation, but the similarities definitely are present.