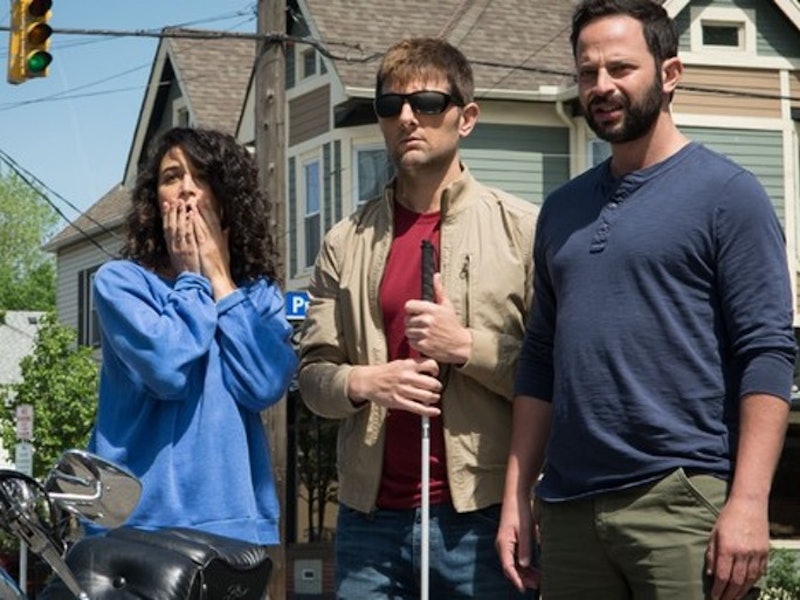 Three of the biggest indie comedy stars of today are teaming up for a movie that is sure to become a legend in the genre. My Blind Brother stars Adam Scott ( The Overnight ), Jenny Slate (Obvious Child), and Nick Kroll (Adult Beginners) — a veritable dream team in modern comedy — in a highly unorthodox plot for a comedic film. Scott portrays Robbie, a handsome and athletic ladies man who happens to be blind. Kroll is Bill, his less-attractive underachieving brother upon whom Robbie relies to be his eyes. They have a basic understanding of how their lives are supposed to work, but things become complicated when they both meet and fall for Rose, who's portrayed by Slate.

A movie featuring a disabled person who happens to also be kind of an arrogant jerk is definitely risky territory, but that's exactly what inspired director Sophie Goodhart to make the film. "Anyone has as much right to be a d*ck as anyone else," Goodhart told Bustle's Rachel Simon in early 2016. "Just because you're blind doesn't make you kind and perfect. You still can be just as much of an egotistical maniac as anyone else." And that attitude is captured perfectly in the film's exclusive first poster.

As you can see, the poster does a pretty good job of getting across the characters' personalities. Robbie is being a jerk, Bill is trying to be in the picture, and Rose is caught in the middle; seemingly unaware of the drama going on behind her. "They're so perfect for the roles," Goodhart says of the trio. Scott is able to seamlessly transition from "selfish and self-aggrandizing" to "vulnerable and disappointed," adding a great amount of depth to a very complicated character. And Slate, in a role that in the hands of a less capable writer and/or actor, is described by Goodhart as "clever and courageous" as Rose. Meanwhile, Variety's Andrew Barker, in his review of the film, describes Kroll's performance as "sympathetic in his sad-sack haplessness."

It's not often that three comedic actors at the height of their game unite for a film, and it's even rarer when it happens in a movie as original as My Blind Brother. That combination makes the movie a must-see for comedy fans, and they'll get their chance when the film hits theaters and On Demand on Sept. 23.